On www.allah-las.com, the Los Angeles band of the same name have posted a bunch of unusually excellent mixtapes. The latest, “Reverberation #25”, is pretty typical, taking in the likes of Jim Sullivan and Tim Hardin as well as the group’s backwards-facing contemporaries: White Fence, Sonny & The Sunsets and another bunch out of what always seems to be an unbelievably small and cliquey LA indie scene, The Beachwood 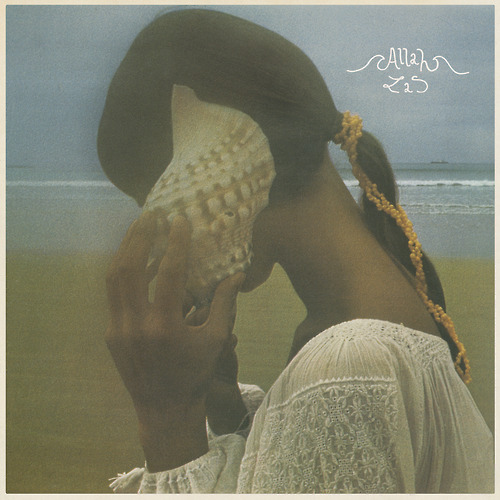 On www.allah-las.com, the Los Angeles band of the same name have posted a bunch of unusually excellent mixtapes. The latest, “Reverberation #25”, is pretty typical, taking in the likes of Jim Sullivan and Tim Hardin as well as the group’s backwards-facing contemporaries: White Fence, Sonny & The Sunsets and another bunch out of what always seems to be an unbelievably small and cliquey LA indie scene, The Beachwood

There’s a reasonable chance that the Allah-Las might have played a pivotal if discreet role in that scene, since it seems that the band were formed while they were all working at the excellent branch of Amoeba in Hollywood, presumably dealing rare records to their peers. As you’d perhaps imagine, then, the Allah-Las’ do not make notably gleaming and 2012-ready music. Even by the standards of other notionally retro bands, their self-titled debut album is uncannily and magnificently dated, down to every fuzzy chime of the guitars.

Beautifully produced by someone I’ve never heard of, described in the notes as “cult new wave R&B wunderkind Nick Waterhouse”, “Allah-Las” seems located right at the point in the mid-‘60s when American garage bands started processing and responding to the British invasion. Obviously, there’s a lot of “Nuggets” love here (“Busman’s Holiday” mixes the Stones with what first seems like a little Dylan, though it’s possibly more likely to be influenced by Mouse & The Traps), but the Allah-Las are more elegant than raucous, a suaver proposition than fellow travellers like The People’s Temple (I wrote about their fine “Sons Of Stone” here).

Sometimes, on lovely instrumentals like “Sacred Sands”, the ghostly, lonely surfer draw of The Ventures is stronger than that of The Animals. At other times, you’re lead to suspect that they believe the Stones peaked with “Stupid Girl” (exhibit A: “Tell Me (What’s On Your Mind)”) and that The Byrds were never quite as good as The Beefeaters. Oddly, the most advanced musical echo occurs on “Vis-à-Vis”, when after the jangling intro (cf “She Don’t Care About Time”) they hurtle forward in time to the mid-‘80s, and the kind of, well, Byrds-rich indie promulgated by The June Brides or, for a couple of singles, Primal Scream.

It is hard, evidently, to write about the Allah-Las without acknowledging a certain ridiculousness: check the video for “Tell Me” for further proof…

Truth is, though, I’ve enjoyed “Allah-Las” these past few days more than any record in a while: not just for the diligence and love with which they approach this music, but also the quality of the songs underneath the vintage packaging (On “Ela Naveda”, they sound like ‘60s prep boys tentatively becoming bohemian through close study of half a dozen Bossa Nova sides). All very engaging, though it seems as if the band might be evolving towards the late ‘60s next, given that they’re currently in the studio with another noted moderniser, Jonathan Wilson. Promising…