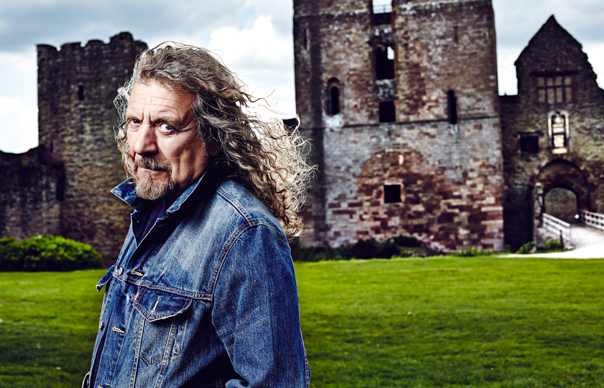 There is a man kneeling on the floor next to Robert Plant pulling seaweed from a wooden crate. It’s June 23, and we’re at a small after show drinks reception at Le Bataclan, Paris for Plant and The Sensational Space Shifters. The man on the ground, it transpires, is a friend of Philippe Brix, the French manager who introduced Plant and Justin Adams to the Festival In The Desert in Mali. Brix has arrived at the gig with a crate of homemade wine and a crate full of oysters for Plant and the band. The next morning, Plant arrives in the lobby of his chic hotel wearing a navy blue t-shirt and grey jeans with his hair tied up in a topknot. At our first meeting, Plant hadn’t entirely decided on a title for the new album. Can he now explain what lullaby and… The Ceaseless Roar means?
“It’s explanatory of all life,” he begins, sipping a café au lait. “Life has a dynamic. It’s not always so dramatic, but the extremes are… well, the extremes. It probably follows right the way through the story of my choices in music. Where I’ve been pleased to rest along the way in music, with people, with certain musical attitudes and enthusiasms – and sometimes the very opposite of that. It’s just like, ‘What a life!’”
And what is life like now for Robert Plant, out there on the Welsh Marcher lands?
“I like adventures in Soho and East London, the Lower East Side of Manhattan, and I know my way round Marrakech quite well. But I’m not a city guy. I can never really get over the speed of the changes of the seasons. At this time in my life, I’m trying to slow it all down, slow down the movement of the seasons so I can really devour them. We were in Estonia and Northern Sweden recently and I could see that spring had turned to summer there and I knew that if you went seven or 800 miles south you’d be on a line where I live. So the season would have advanced that much more there, and I would have missed it. But what do I do? I just go slowly with Arthur over the fields. ‘Misty Mountain Hop’. Well, that shit’s all still there, I’m drawn to that stuff. That’s what I do when I play five-a-side on a Wednesday night with my friends in the village where I’ve been most of my life. We all wait to see who’s gonna have the first cardiac arrest. I promised I’d buy a defibrillator for the village, just to help out.
“There’s one or two policeman who play on the team. It’s funny how a few years gone by, I was neurotic about the cops checking my pockets and I now I play soccer with them. It was a huge change to come back, a complete about turn for me. I spun round, right round, 360 degrees really, right round in a circle and came back. I threw my lot back in with the five-a-side on a Wednesday!
“I think you asked me about being… not restless, but on the move. I think that shows in the lifestyle of a musician anyway. You’re not around long enough to be particularly affected by the glory of the moment. I like that thing about being gone. I don’t wanna do multiple nights in one place. I wanna be gone 15 minutes after we’re offstage. Just gone. I guess every generation’s got its epoch of hope and passion and drive and zing and zest. I don’t miss the one I was in because I’ve still got it. I’m still there, and the company I keep is everything. That gig last night? That was as good as it ever, ever was. Ever was.”
Do you still think you need to prove anything after 48 years of making records?
“No, not to prove… time is so important. The passing of time, when you get to this stage in life. When you get to that last verse in the ballad on the album [“A Stolen Kiss”]: ‘There’s so little time’. You can’t bluff it. You can’t fake it, you can’t take it up, you just gotta live it out. Time is so valuable. I don’t put anything out that I don’t have 110 per cent passion for. Otherwise I’ve got plenty of other things I could do with my life. Mix a greyhound with a good Bedlington Terrier, all that stuff. That’s what I love.”
How would you like to be remembered?
“Probably as the world’s slowest inside right in the Kidderminster Sunday league. I was always keen, though. I never had sex on a Saturday so that I could save myself, and to see if I would actually be picked in the First 11 that ran out onto a pitch that’s covered in cow shit, on the top of the Clee Hills. Clee Hills and Mortimer, where you could have a bloody nose in a minute and a half if you weren’t careful. Look, I just wanna have some fun. And that’s kind of what I said in 1968.”
And have you had fun?
“On and off, yeah. Mostly on.”