It’s been a decade since the words ‘A Walter Hill film’ have graced the screen. 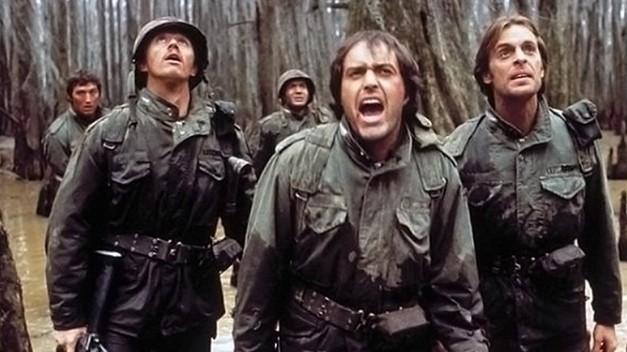 It’s been a decade since the words ‘A Walter Hill film’ have graced the screen.

Hill’s last film, the prison boxing drama Undisputed, was released back in 2002. Since then, Hill, one of the great action directors working out of Hollywood during the late Seventies and the Eighties, has slipped slowly off the radar. He directed the first episode of HBO’s Deadwood and also a 2006 mini-series, Broken Trail, another Western; other than that, his byline has only appeared in his capacity as a producer on the extended Alien franchise.

This week, though, Hill makes a return to active filmmaking with Bullet To The Head, adapted from a graphic novel and starring Sylvester Stallone as a hitman. Also released this month is a Blu-ray edition of 1981’s Southern Comfort, one of Hill’s best – a pared-to-the-bone film about a group of National Guardsmen on a weekend exercise in the Louisiana Bayou who cross the local Cajuns.

“Walter is an action guy – he doesn’t make chick flicks, you know?” Keith Carradine, who starred in Southern Comfort, once told me. “But that’s a part of his make-up, and I think it’s a reflection of how he looks at things and what, to put it bluntly, turns him on. And the stories of struggle and the nature of personal courage, dealing with the danger-slash-peril of how a man confronts threat, what makes a man a man in terms of his personal integrity… it’s archetypal.”

Hill’s touchstones are genre masters like John Ford, Howard Hawks or Raoul Walsh. Speaking to Uncut in 2005, Hill said, “Every film I make is a Western.” Carradine, who also starred in Hill’s The Long Riders, remembers just how unfashionable Hill’s influences seemed in the early 1980s. “These executives came down and looked at the dailies,” says Carradine. “And they said to Walter, ‘What are you doing? This looks like John Ford.’ And I remember Walter looked aghast and saying, ‘What’s the matter with that?’ But these guys couldn’t relate.

“I think his films are a reflection of the American psyche,” continues Carradine. “I really do, I think that’s what Walter understands. He knows what the underbelly of this experiment that is the United States, you know. The way this country came to be, and how we as a people have stumbled along. And gone through moments of greatness and frankly some of it shameful. And I think Walter gets it, he knows what it is. And those films in a way are microcosms of certain elements, very elemental aspects of the nature of that Americanness. And I think that’s what he addresses, I think that’s interests him. He’d probably hear me saying this and tell me I was full of it, you know… But that’s kind of what he looks at, I think that’s what he distils and puts up there to show people, and that’s what makes his films and the stories he chooses to tell and the genres in which they fit, that’s what makes his work so compelling. He’s quintessentially American himself and I think that’s reflected in the films that he makes. And I think that’s probably why he looks to the movies of Hawks and John Ford and those guys, Peckinpah certainly, I think those are all film makers who reflect that same sensibility.”

Sad to say, Bullet To The Head seems unlikely to restore Hill’s fortunes. One comment on a Guardian message board about the film said, “Walter Hill is still with us? I thought he had died years ago.” I’m not certain where Hill fits in today’s movie culture. Contemporary action films demand big budgets and extensive CGI – not really the kind of thing Hill seems particularly bothered with.

“You know what?” concludes Carradine. “My favourite quote from recent pop culture is from Unforgiven, when Clint Eastwood says to Gene Hackman: ‘Deserve’s got nothing to do with it.’ And it doesn’t. The fact is that there’s probably no more deserving filmmaker alive today to be recognised and held aloft than Walter Hill. And for whatever reason he is overlooked right now. But we’re in a cruel business. And it’s usually more about fashion than anything, and fashion is fickle, fashion is shallow and unfortunately that has more to do with what goes on in this business than real art of craft and certainly integrity.”