“A folk singer with a cat”: Bob Dylan, Greenwich Village and the new Coen Brothers film

I’ve been meaning to write about this for a week or so now, but pesky deadlines for next month’s issue of Uncut kept getting in the way. Anyway, here’s some thoughts on the trailer for the new Coen brothers film, Inside Llewyn Davis. 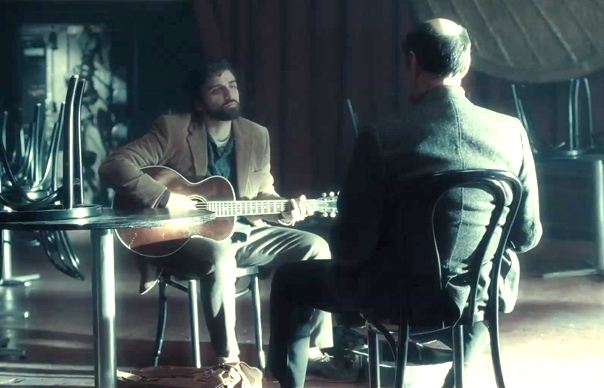 I’ve been meaning to write about this for a week or so now, but pesky deadlines for next month’s issue of Uncut kept getting in the way. Anyway, here’s some thoughts on the trailer for the new Coen brothers film, Inside Llewyn Davis.

It would, I think, be a gross understatement if I said that regular readers of Uncut might find something to pique their interest here. There’s the early Sixties Greenwich Village setting, for instance, and the use of a rare Bob Dylan cut on the trailer’s soundtrack (“Farewell”, originally recorded for The Times They Are a-Changin’ sessions). Although it might be a typical case of wilful misdirection on the part of the Coens, the story itself – about a young folk singer making his way round the New York folk scene – is apparently based on Dave Van Ronk’s memoir, The Mayor Of McDougal Street.

What we do know for sure, however, is that Llewyn Davis is played by a relative newcomer, Guatemalan actor and singer Oscar Isaac – you might remember him as Carey Mulligan’s husband in Drive. Despite the Coens’ claims Davis is based (to whatever degree) on Van Ronk, Dylan is everywhere in this trailer – and not just on the soundtrack. Davis appears to be wearing jacket in the trailer that’s a dead spit for the one Dylan’s wearing on the Freewheelin’… album cover. There’s a shot early on in the trailer where Davis crosses what looks like Jones Street, where the Freewheelin… album sleeve was shot. At any rate, according to this Tumblr site, the Coens seem to have done some filming there.

Apart from Davis – “a folk singer with a cat” – we also get Carey Mulligan as Jean Berkley, whose role here suggests a conflation of Suze Rotolo and Mary Travers. You can also, very briefly, spot Justin Timberlake, as Jean’s singing partner and, from what I can deduce from the IMDB listing, her husband. More prominent in the trailer is John Goodman, sporting a fantastic haircut, and also F Murray Abraham, fresh from running black ops in Homeland.

The soundtrack, predictably, seems to have been put together by regular Coens collaborator, T Bone Burnett – I read somewhere it’ll include contributions from Timberlake (a potentially brilliant idea) and Carey Mulligan’s other half, Marcus Mumford, which is admittedly less appealing. A little digging on the internet divulges that there was an early screening of the film a few weeks ago in the States, and it wouldn’t surprise me if it didn’t premier at Cannes in May – a regular festival haunt for the Coens, who’ve previously picked up seven nominations for the Palme d’Or.