Lewdly funny adventure fantasy. Bow down for a new star... 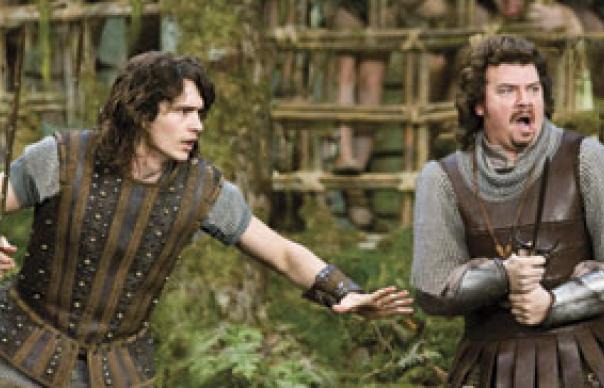 Regular viewers of the Uncut Channel – HBO – may already be familiar with Danny McBride, the star and co-writer of Your Highness. McBride is the creative force behind the channel’s comedy series Eastbound & Down, in which he plays Kenny Powers – a disgraced former professional baseball player forced to take a humiliating career downgrade, teaching gym class at his old school. Powers is arrogant and obnoxious – traits McBride successfully exported to other movies such as 2006’s micro-budget indie The Foot Fist Way (his American breakthrough), Tropic Thunder and Pineapple Express.

McBride brings to life another of his reprehensible gargoyles for Your Highness – a terrific, bawdy riff on fantasy movies, whose plot takes in a kidnapped princess, an evil wizard, knights, crones and mythical beasts. McBride plays Thadeous, the second in line to the throne of Mourne, a magical kingdom ruled by benevolent king Tallious (Charles Dance). Thadeous is the black sheep of the family: an inveterate shagger, liar and coward. His elder brother is high achiever Fabious, played with wholesome vigour by James Franco (fresh from his Oscar nomination for 127 Hours). As is often the case with younger siblings who are overlooked in favour of their more successful elders, Thadeous is resentful towards Fabious. When Fabious’ new bride Belladonna (Zooey Deschanel) is kidnapped on their wedding day by evil wizard Leezar (a camp, scene-stealing Justin Theroux, looking like the drummer in an ’80s metal band), Thadeous is dispatched against his will with his elder brother on a quest to retrieve her. Also along for the ride: Toby Jones’ oily courtier, Damian Lewis and a banner of knights, Thadeous’ knave Courtney (Saxondale’s Rasmus Hardiker) and a mechanical bird, called Simon.

As with Pineapple Express, which also starred Franco and McBride, Your Highness is directed by David Gordon Green. Green’s career trajectory has been an exemplar of the stark realities of modern independent filmmaking. He made his debut, aged 25, with George Washington (2000) – a languorous study of rural American life that won him lofty comparisons with Terrence Malick. He followed it up with another low-budget movie, 2003’s All The Real Girls, starring Zooey Deschanel (and, in his first film role, McBride). A brilliant film – but, alas, no-one saw it. Even fewer people saw his next, Undertow, while his fourth film, Snow Angels, was never released in the UK.

At some point, Green made a pragmatic decision to cut his losses. Moving away from deeply personal independent movies, he teamed up with producer Judd Apatow and star/writer Seth Rogen for Pineapple Express – a rowdy stoner action film, no less. Green has also secured a Consulting Producer title and sporadic directing credits on McBride’s Eastbound & Down. It’s been a risky, but broadly successful transition from the arthouse to the mainstream for Green. Pineapple Express took over $100 million at the box office. Critically, it also felt like a legitimate
attempt to extend the painfully limited boundaries of the frat boy comedy; its reference points included Midnight Run and 48 Hours as much as the Cheech & Chong films. It took the ‘serious’ parts of the movie, well, seriously; the perils faced by Franco and Rogen’s characters seemed genuine enough in context. Indeed, characters died in the film. Its take on Franco and Rogen’s characters was unusually melancholic for a comedy; here were two burned-out men, locked into a state of permanent adolescence.

For Your Highness, Green, McBride and co-writer Ben Best (another Eastbound & Down veteran) cleave close to the specifics of fantasy movies, but then do their own funny, filthy thing with them. So, Leezar’s plan to impregnate Belladonna in accordance with an ancient prophecy is called “The Fuckening”. In a nod to Jim Henson’s marvellous animatronic creations from movies like Labyrinth, there’s a dope-smoking ‘wise wizard’ – a funny, turtle-like creature who Fabious reveals, “I’ve known since I was a boy. Sometimes we’d take off our shirts and jump up and down on the bed.” Indeed.

If you think it sounds like a ruder version of The Princess Bride, then that’s not too far from the truth. As with William Goldman’s film (and novel), Your Highness both affirms and challenges genre conventions. But Your Highness is, frankly, a lot less innocent and charming. While James Franco and Natalie Portman – as a female warrior on a quest of her own – keep commendably straight faces amid the stream of knob gags, McBride gives free rein to Thadeous’ devious, philandering instincts. When first we meet him, he’s about to be hung for bedding the Dwarf King’s wife. Later, when Fabious is struggling to hold down a lungful of dope smoke, an irritated Thadeous snaps at his less-worldly brother: “Learn to handle your shit, Fabious.” It’s the kind of character you could imagine Jack Black or Will Ferrell playing; bulging eyes, potty mouthed, screamingly funny. With Black and Ferrell both currently experiencing career lulls, it might not be too much longer before McBride assumes their place at the movie comedians’ top table.

McBride has range, too – witness his performance as George Clooney’s future brother-in-law in Up In The Air. Promisingly, we’ll next see him as Beastie Boy Adam Yauch, opposite Seth Rogen as Mike D and Elijah Wood as Ad Roc, in Fight For Your Right Revisited; a comedy short directed by Yauch about the Beastie’s “Fight For Your Right To Party” video. The last couple of years have been quite a remarkable ride for Danny McBride. One only hopes he can continue to handle his shit.
Michael Bonner