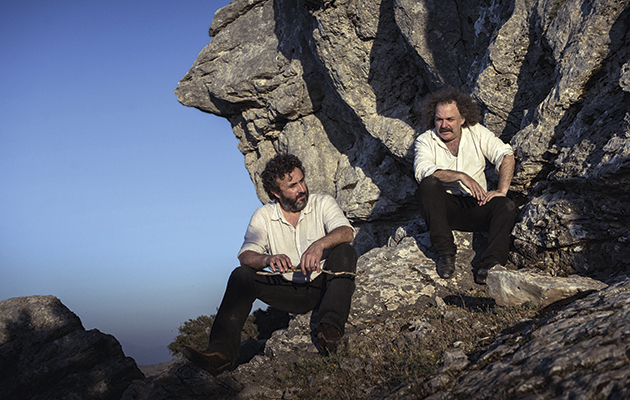 With so much of what is labelled “world music”, the appeal is not always the lure of the Other. In many cases we are seeking a twist on the familiar, be it Tuareg musicians who sound like galloping heavy metal bands, Bollywood musicians making slightly wonky disco, or Nigerian dance bands making pulsating big-band funk. It is the everyday being put through an unfamiliar filter – like seeing ourselves reflected in a fairground mirror.

This, in part, is the appeal of the Cretan lute player Giorgos Xylouris. He is a renowned exponent of traditional music from a noble family – his father and two of his uncles are celebrated exponents of the lyra, a bowed instrument with roots to the Byzantine Empire – and his Xylouris Ensemble (featuring many of his friends and relatives, including some of his own children) play a lively take on traditional Cretan music. But put him and his Cretan lute, or laouto, alongside the free-rock drummer Jim White and his sound seems to transform. Their thrashy drums/lute duels can have the free-swinging energy of The White Stripes or the herky-jerky of a post-punk band, while other times they sound like growling freak-folk balladeers.

The pair met in 1990 while Giorgos was living in White’s home city of Melbourne. After playing on the same bills for nearly a quarter of a century, they finally got together in Manhattan in 2014 (courtesy of the Cretan Association of New York) to record the album Goats. The follow-up, started in New York and completed in studios in Crete and, of all places, Iceland, is a less subtle and more vividly defined cultural collision that is in every sense of the word. The punky tracks are very punky indeed; the brooding ballads particularly broody.

The laouto is an eight-string instrument with moveable frets, sharing the same violin-like tuning (GDAE) and paired strings as the mandolin. In traditional Cretan music, its role was that of “passadorikos”, playing chords and countermelodies to accompany the bowed lyra. Giorgos Xylouris, however, is part of a generation of laouto players who have transformed the instrument from to – from rhythm to lead. And Black Peak sees Xylouris moving freely between the two modes, often within a fraction of a second.

Watch him in action and you’ll see him manipulate the instrument in a variety of ways. He strokes the strings with his fingers, or picks at them with his thumb and fingernails, but usually uses a long, floppy plectrum – historically made of a vulture’s feather – which can be flapped loosely to provide lightly strummed pattern, or held tightly to get an aggressive tone.

The title track of the album opens with a sparkly, plucked riff, backed by pounding floor toms and a stentorian vocal. “Forging” is a powerful one-chord drone that mixes a proggy, chiming metal riff with some thunderous drum pattern and sees Xylouris forcing out a simple four-note melody at the upper end of his vocal register.

A track entitled “Erotokritos” is based on the opening stanzas of an epic 17th-century poem that provides the basis for much Cretan music. “It is about the past and the future,” says Xylouris. “About how our feelings for time go deep into the earth and cry out into the sky.” He adopts a terrifyingly low baritone rumble, while his pal Bonnie ‘Prince’ Billy provides eerie vocal harmonies.

Other lyrics, all sung in Greek, are written by a friend of Giorgos, a Cretan farmer (and, apparently, jewellery designer) called Mitsos Stavrakakis. The title track, for instance, is about a black mountain in Crete. “The lyric asks the mountain if he is lonely and needs company,” says Giorgos. Other tracks seem similarly rooted in the landscape, or in traditional folk melodies: “Pretty Kondilies” is a jaunty, sailor’s hornpipe-like instrumental that draws attention to traditional verse.

But most effective of all are the ballads, which are weirdly aggressive affairs. Usually they stay on a single chord and see Xylouris playing tremolo style, strumming chords so quickly and so violently that his instrument sounds like a giant, angry wasp. Throughout White plays with the inventiveness of a free jazz improviser but uses the tom-toms rather than the cymbals to create highly textural accompaniment, while Xylouris sings arhythmically, like a declamatory poet.

When Giorgos’ father Psarantonis arrives on the final track, “The Feast”, to provide countermelodies on the bowed lyra, it sounds like a circle has truly been completed. This is Cretan folk music played with a rock’n’roll intensity that is truly immersive.

Q&A
Giorgos Xylouris
How much of the music is improvised?
We have the basic song before we record. But each time we play, it’s like we are teasing the song to see what it will give back to us. And we try to make more space every time to do a new thing. It’s like we have a map of the song, and, as we play, we then discover more creeks, more peaks, more roads, more trees, more animals! Jim is an amazing, unique musician. I discover myself with him every time we play together.

How do you label this music?
We have been labelled free jazz, post-punk, world music, ethnic music. I think we’re a mosaic of all these labels. My life, since I was 12 years old, was as a professional music. I would play shows with my father: we’d stay in the same room, wake up the next day and play another club. Even now, I play the lute all the time. I worry that my friends want me to shut up and stop playing. I even sleep with my instrument! The other day I fell asleep with it on my chest and it fell on the floor and broke! Luckily I was able to fix it…

What are your influences outside of traditional Greek music?
Initially, the only chance I got to listen to other music was when it was on the radio, in a bar. But I liked lots of it – Jimi Hendrix, the Stones, Led Zeppelin, Bob Dylan, Neil Young, Billie Holiday, Paco de Lucia. Later, in Melbourne, I would hear the Dirty Three, the Bad Seeds, Grinderman, Irish music. I loved it. I am always open to new music – I loved The Cairo Gang when we supported them in the US. I am also obsessed with an Alice Coltrane album at the moment. And so on.

How did you meet up with Bonnie ‘Prince’ Billy?
Oh, I wish I could record more with Billy! I’m sure we will in the future. When he sings backing vocals, he gives a spiritual, exotic feeling to the music. He gives me this feeling every time I hear him sing. It is the feeling that we exist in a different timing.
INTERVIEW: JOHN LEWIS