Woodstock 40 Years On – Back To Yasgur’s Farm

A 6CD box, with 36 unheard tracks, to mark 40th anniversary 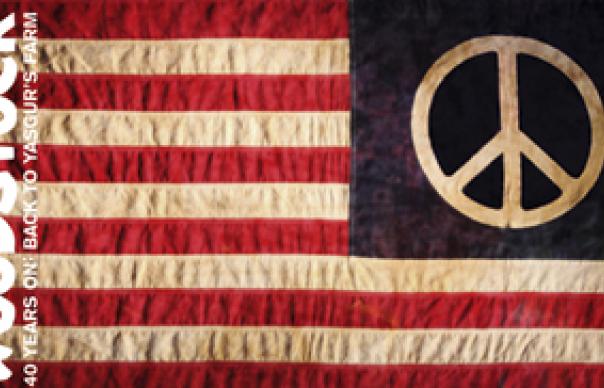 Perhaps the most over-used remark in popular culture is “If you can remember the 1960s, you weren’t there.” Three Days Of Peace And Music, an event whose title has over the succeeding 40 years been contracted, simply, to “Woodstock”, turns that idea on its head. If you were one of the half a million there, or the countless millions more who weren’t, this is a historical event so abundantly filmed and recorded, that everyone down the generations since has their own memories and experiences of three days where, in upstate New York, brotherhood was fleetingly, and muddily, approximated.

Maybe not physically, perhaps – but in a way, we were all there.
Warm fellow-feeling aside (and there is a surfeit of that here, from Chip Monck and John Morris’ stage announcements, to the classic psychedelic/folk-rock that predominates) Woodstock was an event by which an artist could be measured. The sets that bands played there, and – crucially – whether these sets were included in Michael Wadleigh’s headspinning documentary, could make or break a career.

Before the festival, Santana were virtual unknowns – after it, they were booked into Bill Graham’s Filmore venues on a residency that lasted, seemingly, for ever. Country Joe, whose “…Fixing To Die Rag” remains the festival’s highpoint of anti-war ferment and good cheer, was not billed to appear. Iron Butterfly were on the poster, but didn’t play, their prima donna attitude leaving them sat on their flight cases in Woodstock’s footnotes.

History, as far as Woodstock is concerned, seems to have conferred its laurels not according to talent or reputation, or commercial success, but on those who were able to rise to the occasion on the day. A six-disc, 77-track collection that includes stage announcements about acid both brown and green, and attempts to confirm in which order the bands played (Country Joe solo on day 2? Are you sure?), Back To Yasgur’s Farm has a documentary feel that’s one of its most successful aspects.

Though the previously released Woodstock and Woodstock Two LPs brought us some memorable moments (say Jimi Hendrix’s rambling song intros, much reduced here) you could formerly have been forgiven for thinking that some of the biggest bands of the era – Creedence or The Grateful Dead – somehow had other engagements over that weekend. Now, we can confirm that they were indeed present, if not always entirely correct.

As with the event itself, one imagines Back To Yasgur’s Farm was a nightmare project to get together, but one which ultimately feels worth it. There are negligible omissions (The Keef Hartley Band), and there are major ones (Woodstock natives The Band wanted no part of this). But as you might hope, a certain equality prevails: it serves to remind that Sly Stone’s attempts to take you higher were as accomplished as Jimi’s “Star Spangled Banner”.

It makes plain that the ‘Dead were on a rare bummer, their every move accompanied by minor electric shocks. It reminds that playing at 2am directly after them, Creedence’sJohn Fogerty was intent on whipping his band, the sound crew, and a somnambulant crowd into shape. Space is awarded to Quill, Sweetwater and Mountain, recognising perhaps that this was an event as much about the little guys as it was the stars.

What’s maybe most interesting about Yasgur’s Farm is that even over the length of six CDs, in a handsome box, with expansive notes by Uncut’s own Bud Scoppa, Woodstock remains an event with too many narratives and too many different strands of experience to be easily captured. Janis Joplin’s performance, perceived by so many to have been something of a car crash, has over its full length a compelling power that the inclusion of only “Work Me, Lord” and “Ball And Chain” can’t quite convey. For all the iconic status of his rendering of the US national anthem, we’ll never hear quite how Jimi Hendrix wanted his band Gypsy Sun And Rainbows (two percussionists, extra guitarist Larry Lee and all) to sound. While Jimi thought he was doing something new, the sound engineer evidently didn’t agree, and these extra elements can barely be heard.

For reasons of time, space, and the need to provide the kind of set that can be paid for (not to mention lifted by), a nostalgic baby boomer, Yasgur’s Farm can’t go down these roads. As such, it provides something that’s much more than a summary – there are 36 previously unheard tracks, and lots of colourful documentary snippets – but which falls short of being the fully immersive experience. However, whether you were there or not, everyone’s experience of Woodstock is different. Somewhere in here, you might well find your own.