White Denim, as their frenetic live shows would suggest, are not a band much given to idling. Last summer, while the master tapes of their scintillating third album D were withering on the reel, awaiting record company approval of a reworked song that the band never wanted on the album in the first place, the Texan crack shots decided to use their downtime productively. 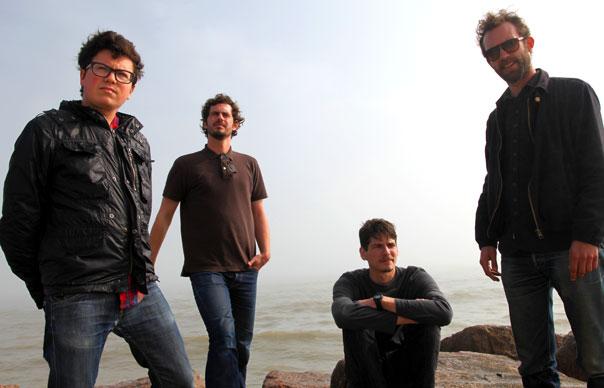 White Denim, as their frenetic live shows would suggest, are not a band much given to idling. Last summer, while the master tapes of their scintillating third album D were withering on the reel, awaiting record company approval of a reworked song that the band never wanted on the album in the first place, the Texan crack shots decided to use their downtime productively.

They retired for one last time to their fabled Silver Bullet trailer in the woods outside Austin and made a whole new album in four weeks, with a view to giving it away for free on the internet. At the time, the record company impasse was considered serious enough to place the future of the band in jeopardy. Yet although the recording of Last Day Of Summer was initially motivated by impatience and frustration, those emotions rarely seep through onto the record. Instead, it sounds like a band kicking back and enjoying themselves, free from external pressure or mediation. If White Denim genuinely believed that this might be their last hurrah, they were sure as hell going to go down blazing rather than whining.

Made available as a free download from White Denim’s website last September, Last Day Of Summer achieved its aim of proving to the record company that the band were too good to let slip. Now, that very same record company is giving the album a physical reissue, backed by a full press and marketing campaign, acknowledging that it deserves to be heard by a wider audience. In fact, Last Day Of Summer is as good as anything White Denim have ever done, and for any listeners daunted by D’s proggier diversions, it might even prove to be a gentler introduction to this terrific band.

The album hares off at a frightening pace with a hilarious seat-of-the-pants romp through “I’d Have It Just The Way We Were”, the breezy 6/8 jam from second album Fits (not for the first time, you will convince yourself that drummer Josh Block must have at least three arms). That’s swiftly followed by the infectious breakneck boogie of “Home Together” (Canned Heat on heat?) and probably the catchiest top-down driving rock song White Denim have ever written in the form of “Tony Fatti”, Petralli assuming the role of a washed-up ‘60s stuntman poignantly pleading for one last ride.

Things calm down a little after that, but even an apparently straightforward Southern strut like “If You’re Changing” exists in three different time signatures, before giving way to the lithe, Soft Machine-style folk-jazz excursions of “Incaviglia” and “Light Light Light”. As always with White Denim though, the musicianship never overwhelms the songwriting, existing as a welcome bonus rather than an indulgent distraction. The astonishing guitar break at the end of “Our Get” – the work of fleet-fingered new guitarist Austin Jenkins, making an impressive debut here – is much more than mere decoration, lifting the song into an entirely new realm.

Then there’s “Champ”, an enjoyable spot of a rough-and-tumble psych that harks back to the band’s antsy garage rock beginnings, and “Shy Billy”, which brilliantly chances its arm at lovesick ’80s funk. By the time you reach closing track “New Coat”, which nods towards at least three different soul classics, all you’re really conscious of is having been rigorously entertained. Whether they spend six months in a proper studio or four weeks in a caravan, White Denim are incapable of making a boring record. We should be very grateful that they’ve survived to make some more.
Sam Richards

Q&A: James Petralli
Why did you decide to record a whole new album while you waited for D to progress?
We were pretty uncomfortable with having to wait two years to follow up Fits, and we also had a ton of strong material that was essentially ready to go. We feared that the songs from Last Day would become less interesting to us as time went by, and that if we didn’t push them out they could be lost. We also figured that if the album generated excitement in our fans, then it might do the same with our business partners and encourage them to set a release date for