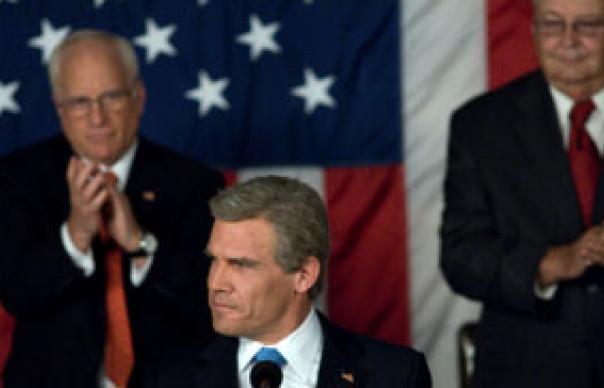 In Oliver Stone’s previous treatment of a president he despised – 1995’s Nixon – he sublimated his fury at the politician and presented, abetted by a brilliant Anthony Hopkins, a compelling study of the squirming heart of the man. When Stone made Nixon, however, he had twenty years of perspective to draw upon. Stone started shooting W. in May 2008, and his desire to be the door that hits George W. Bush in the arse on his way out of the White House has resulted in a film which is trivial, fatuous and – of all things for a Stone film – boring.

None of which is the fault of the cast, even if the contemporary nature of the material mandates that they’re not acting, but impersonating. Josh Brolin is terrific as Bush, aping the man’s swagger while radiating the vulnerabilities of a president who – intriguingly – Stone depicts as unimpeachably well-meaning. And one can only wish that the real W. had been surrounded by people so capable: Toby Jones a wondrously unctuous Karl Rove, Thandie Newton an eerie Condoleezza Rice, Richard Dreyfuss keeping his Dick Cheney just this side of Dr Evil.

The real star is James Cromwell as George H.W. Bush, a lifelong over-achiever despairing of a son who, as late as his 40th birthday, had accomplished nothing. The idea that George W. Bush has been animated by desire to please his father is neither original (Craig Unger’s The Fall Of The House Of Bush makes an especially convincing case) or implausible. And it’s probably no coincidence that Stone commissioned the screenplay from Stanley Weiser, who wrote Stone’s previous father-son blockbuster, Wall Street.

Unfortunately, it’s the words that let W. down. In art as in life, perhaps, but too much dialogue is expended in dreary Janet-and-John exposition of the build-up to war in Iraq – events so recent that, surely, few require such blaring reminding. The good lines – Bush Sr asking his dissolute son “Who do you think you are, a Kennedy?”, Bush demanding of Iraq’s absent weapons “You mean he [Saddam Hussein] was running a full house off a pair?” – are memorable chiefly because they’re so infrequent. What’s most baffling is what is omitted.

Stone covers the events that made Bush – his meeting with Laura (a twinkling Elizabeth Banks), his religious conversion – but ignores the day that defined him, and the era over which he presided. Stone may feel he said all he wished to in World Trade Center, but leaving September 11, 2001, out of W. is like making a Winston Churchill biopic that doesn’t mention the Battle of Britain.

It’s tempting to suggest that W. – muddled, glib, bewildering to the sane observer – is the cinematic memorial its subject deserves. It’s more so to posit that Stone should have learnt something from his research about the unwisdom of charging into things too hastily.