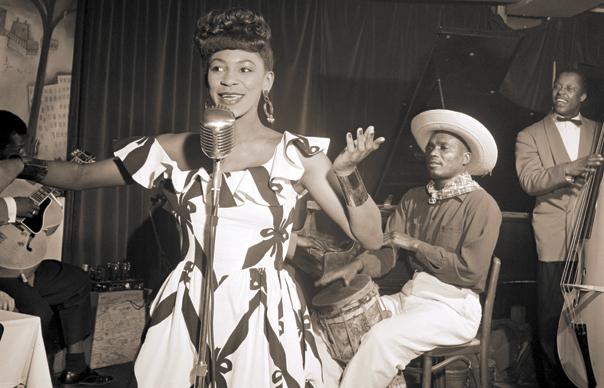 In Chronicles, Bob Dylan delivers a passionate appraisal of Harry Belafonte’s career saying that he was ‘the best balladeer in the land’. It was Belafonte who effectively launched the calypso craze, commanding an entire disc on this handsome new box set. His 1956 LP Calypso featuring the ubiquitous “Banana Boat Song” became the first million-seller – even in the face of competition from Elvis.

Belafonte’s smooth singing style appealed to both folk and easy listening fans but a fascination with Caribbean styles had already impacted in America in the ‘30s and ‘40s. Calypso Comes To America, the first of seven discs, mixes earthy, risqué originals by Sir Lancelot, Duke of Iron and Lord Invader with pop bastardisations by The Andrews Sisters (‘Rum and Coca Cola’), and Eartha Kitt (‘Somebody Bad Stole de Wedding Bell’).

By 1957, calypso music was open season among folk acts such as The Tarriers and The Kingston (as in Kingston, Jamaica) Trio, jazz musicians like Sonny Rollins, who adapted Invader’s “Don’t Stop the Carnival” (later covered by The Alan Price Set), country artist Hank Snow, and old stagers Fred Astaire and Nat King Cole. Comedian Stan Freberg’s “Banana Boat (Day-O)” was a classic novelty hit and, even in Britain Bernard Cribbins and Lance Percival (covering Sir Lancelot’s “Scandal in the Family”) recognised a phenomenon popular among the growing West Indian community.

Elsewhere, this wonderfully exhaustive collection chronicles calypso’s influence in movies and on Broadway and its spread world-wide. A bonus DVD includes lightweight 1957 cash-in film Calypso Joe, featuring Lord Flea and Duke of Iron. 173 calypso tracks may seem daunting but there are plenty of intriguing deviations. The accompanying hardcover book is an absolute delight, clued in and filled with fantastic artwork, posters and photographs.
Mick Houghton