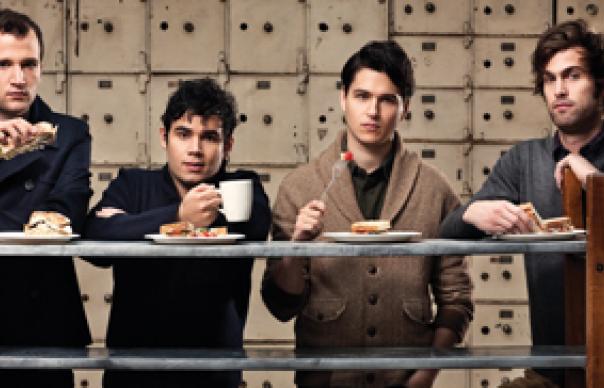 Ahead of the release of Vampire Weekend‘s second album, singer Ezra Koenig has taken, a little improbably, to protesting his band’s punk authenticity: “When people try to frame us as spoiled rich kids, I want to say, ‘Well, hold up. You don’t know anything about my family…’ I mean, I grew up in New Jersey listening to the Ramones, The Clash, Elvis Costello…”

And, unlikely as it might seem, you really can hear echoes of The Clash on the new Vampire Weekend album. In response to Sandinista!, the Clash’s sprawling 1980 triple album of international rebel songs named in honour of the Nicaraguan socialist party, Ezra and his pals have released a discreetly globe-trotting 37-minute album of diffident haute bourgeoisie synth pop named after the Contras, the CIA-backed Nicaraguan counter-revolutionary insurgents.

What’s more, the longest song on the album is called “Diplomat’s Son”, a bittersweet tale of a failed fling in 1981, backed by the kind of reggae you might associate with the theme tune to QI. It reminds you that Joe Strummer first got his taste for world music as the son of a British diplomat based in Turkey, Egypt and Mexico. Complicating things even further, “Diplomat’s Son” mischievously samples a snatch of MIA, the Hounslow-born, St Martins-educated, would-be queen of international shanty-House. Authenticity, once you get down to it, is never as simple as it seems. And Contra, in Vampire Weekend’s case, might just be short for “contrary”.

Despite their well-heeled poise and sense of diligent historical revision (What if one of those jangling UK indie bands who shared Peel playlists with the Bhundu Boys back in 1987 had tried to emulate Zimbabwean Jit or Congolese Soukous?), the sheer infectiousness and impeccable craft of Vampire Weekend’s debut overwhelmed its contrivance. Eventually, it seduced even the most suspicious listeners. But as with so many immaculately conceived, fully-formed groups in the noughties, you wondered whether would they be able to repeat the trick for a second album.

What’s immediately striking about Contra is how little guitar there is on it. It’s almost as though, having made the most moreish electric guitar pop album since the Strokes’ debut, sheer chutzpah has led them to banish the instrument and prove they can make tunes just as absurdly infectious from digital bass, kalimbas, sequencers, synth pads and drum machines . And yet – with its melodic beauty, orchestral invention, rhythmic subtlety and metaphysical wit – it’s still unmistakeably Vampire Weekend.

The opening track, “Horchata”, suggests the band might look to continue in the diamond-soled footsteps of Paul Simon, following an album of African-inspired pop with one based in Latin America – horchata being a Mexican rice drink. But the song’s not so easy to place: they go on to rhyme it with “Aranciata” (the orangeade variety of San Pellegrino) and “Masada” (the ancient Israeli fortified mesa). The track is largely played on an African thumb piano, and the chorus brings in a massed choir. With wistful lyrics about how “years go by and hearts start to harden”, altogether the effect is something curiously like the opening section of TS Eliot’s The Waste Land adapted for the score of a Dora The Explorer movie.

The first single, “Cousins”, is more familiar and more urgent: a frantic yet still somehow dainty two-minute dash that suggests the Penguin Cafe Orchestra having a bash at “Miserlou”. But the lyrics, when you can make them out above the subterranean homesick rush, seem to hint at generational belatedness: “Your dad was a risk-taker, his was a shoe-maker, you’re a 2006 greatest hits little list-maker.”

This little hint, on the album’s most irrepressibly upbeat number, pervades Contra as a whole. On a couple of tracks, the terrific “Giving Up The Gun” and the teasingly titled “Run”, the band seem to have channelled some of the spirit of New Order, where irresistably huge synthetic rhythms glide by with a melancholy undertow. The slowest, saddest songs on the album, “Taxi Cab” and “I Think Ur A Contra”, are the best, Koenig singing of romantic might-have-beens and never-weres amid swirling synth pads, his voice drifting free into an affecting falsetto .

Typically contrary, the most suggestive line on the album might be on the most apparently throwaway song. “Holiday” is another upbeat almost-ska number, the kind that might be cynically written to get a sluggish festival crowd moving. Koenig sings of a girl who’s been “a vegetarian since the invasion/She’d never seen the word BOMBS blown up to 96 pt Futura”. (Futura, of course, is Vampire Weekend’s typeface of choice.) The image of the churning world of terror and destruction erupting so graphically into the aesthetic cocoon of hipster typophilia is ironic and incisive. It’s not The Clash or MIA, but neither is it simply concerned with Oxford commas.

“You wanted rock and roll/ You wanted complete control,” croons Koenig on the closing “I Think Ur A Contra”. There is very little in the way of rock’n’roll on Contra – and in truth it’s all the better for it. But, bold, beautiful and carefully contrary, it’s an album by a band in complete control.