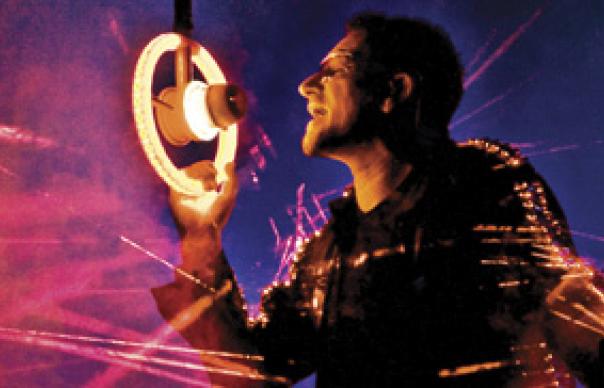 A lot of people have seen this already.

Aside from the 97,014 people present on the night, a hefty roll-up even by U2’s standards, 10 million more watched this October 2009 concert streamed on YouTube.

For those wishing to watch it again, there seems like nearly that many purchasing options. This DVD comes as: a single disc, featuring just the concert; a two-disc deluxe/single-disc Blu-Ray version which contains the concert, a behind-the-scenes documentary, video clips and sundry bonuses; a two-DVD “super-deluxe” box set, the precise content of which is uncertain at time of writing, but is rumoured to include a tour programme, a poster, and limited-edition seven-inch single.

The question, then, is whether U2’s 360º tour is worth revisiting. The answer is yes. 360º felt like a balance in live performance for which U2 had spent a long time searching, between the awesome technological dazzle of the Zoo TV and PopMart tours of the 1990s, and the more old-school Elevation and Vertigo tours that succeeded those. The centrepiece of the 360º set is a vast, alien-looking khaki claw, the sort of thing which (presumably) gathers up those legion Americans who insist that they have been interfered with by curious Martians: it is done justice by 27 high-def cameras, including at least one mounted on a helicopter.

European viewers will see things they previously haven’t: 2009’s 360º shows on this side of the Atlantic opened in evening sunlight, occluding some of the set’s electronic pyrotechnics. By the time U2 reached California, it was autumn, and night had fallen when U2 took the stage (a moment we don’t quite see here – curiously, opening track “Breathe” is relegated to a bonus track on the posher formats).

Most of the show’s set-pieces translate well to a small screen – the linking of “Sunday Bloody Sunday” to the protestors confronting the Iranian theocracy, the irresistibly optimistic address by Desmond Tutu that cues “One” (the dramatisation of “Walk On” by dozens of Amnesty International volunteers in Aung San Suu Kyi masks was possibly something you had to be there for). And the performances themselves find U2 in excellent fettle: channelling (and quoting) Frankie Goes To Hollywood on a belligerent disco version of “I’ll Go Crazy If I Don’t Go Crazy Tonight”, out-Pixieing Pixies on “Vertigo”. Only the ill-chosen closer, the overlong and under-realised “Moment Of Surrender” prompts thoughts of the fast-forward switch.

EXTRAS: Various, depending on which edition you buy.
ANDREW MUELLER