The rise and fall of Marc Bolan and his glam phenomenon... 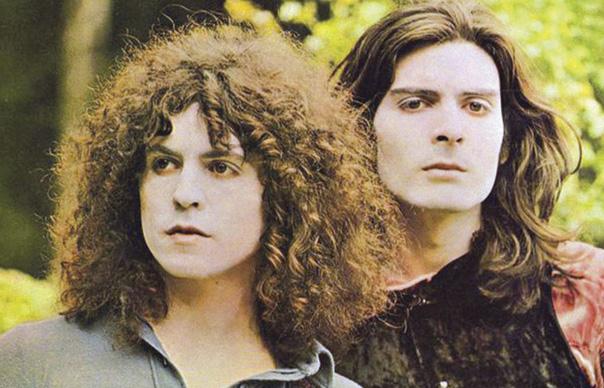 The rise and fall of Marc Bolan and his glam phenomenon…

At first glance, these four expanded reissues trace a familiar arc, from eager ascendancy to hubristic decline. The fourth Tyrannosaurus Rex release, A Beard Of Stars, and the first, eponymous T. Rex album, both dating from 1970, find Bolan in rapid evolution from fairy-folk poet to glam god. Within three years, following the star-making success of Electric Warrior and The Slider, the jig is all but up. Somewhere between Tanx (1973) and Zinc Alloy And The Riders Of Tomorrow (1974), the crown was whipped from atop Bolan’s corkscrew curls and tossed to the next piece of teenage wildlife.

There is, then, much to digest. As well as the original albums we get stray singles, B-sides, John Peel Top Gear sessions, TV performances, studio outtakes, home demos and alternate takes: 159 tracks in total.

It’s a moot point whether A Beard Of Stars (6/10) gains much from 28 additional songs, mostly home demos, given that the album is pretty rough to begin with. It’s a quietly auspicious record, what with the arrival of Mickey Finn on percussion, and the addition of electric guitar to the mix. The result is an odd, repetitive, but not displeasing collision between fey folkabilly – princes, moons and dragons remain consistent preoccupations – and the seeds of something meaner and leaner. In particular the wah-wah burst at the end of “Pavilions Of Sun” and the (admittedly underpowered) electric raunch of “Elemental Child” point onward.

Within months Bolan had shortened the name of the band and tightened up the sound. Although the general approach on T. Rex (7/10) deviated little from A Beard Of Stars, there is more electric guitar, harder bass, less clutter, greater focus. Meaty updates of 1968 single “One Inch Rock” and a gargantuan version of “The Wizard”, originally recorded by Bolan’s old band John’s Children, capture the progression.

Extras include the full 15-minute rendition of “The Children Of Rarn Suite”, already available, 17 previously unreleased demos and alternate takes, as well as the song that changed everything. Though “Ride A White Swan” wasn’t on T.Rex, their first hit single is included here in both its original version and the TOTP performance from November 1970.

After it became a hit, the world opened out. These reissues leave Bolan on the cusp of T.Rexstasy and rejoin him and the band – now a full-blooded four-piece – in 1973, still on top of the world but beginning to teeter. Though derided at the time, Tanx (8/10) is a fine record, even without contemporaneous singles “Children Of The Revolution” and “20th Century Boy”, included among copious extras. (The additional tracks on Tanx and Zinc Alloy overlap significantly with previous Edsel re-releases, although there is sufficient new material to tempt fans.)

By Tanx the quality control is waning slightly, but Bolan’s shunting grooves remain well-oiled on “Shock Rock” and “Born To Boogie”. “Electric Slim And The Factory Hen”, with its lush strings and slurpy sax, and glam-soul showstopper “Left Hand Luke”, point towards Zinc Alloy (7/10), on which Bolan, newly enchanted with singer Gloria Jones, gives fuller vent to funk and R&B influences, predating by several months Bowie’s and Elton John’s interest in disco and Philly soul. A shame, then, that the album title reeks of a desperate Ziggy Stardust knock-off.

Though Bolan was still clearly capable of inspired creativity – the dark, twisted “Explosive Mouth” and “Change” are particularly great – Zinc Alloy is where the wheels really start to come off. Any band spirit had long gone – the album was credited to Marc Bolan and T. Rex – and drugs and ego were taking their toll. The enjoyably sub-Dylan melodrama of “Teenage Dream” – which ended an unbroken run of ten Top 10 singles – tacitly acknowledge that Bolan’s imperial phase is over.

The results may not be as spectacular, or as coherent, as T. Rex at their ’71-72 peak, but they’re still pretty fine. The real problem lay in the fact that Bolan’s shtick had become so formulaic that no amount of genre window-dressing could quite obscure a fatal lack of progression. He had come a long way since “Woodland Bop”, but not, perhaps, quite far enough.
Graeme Thomson