Authentic voices from the haunted back-lots of America 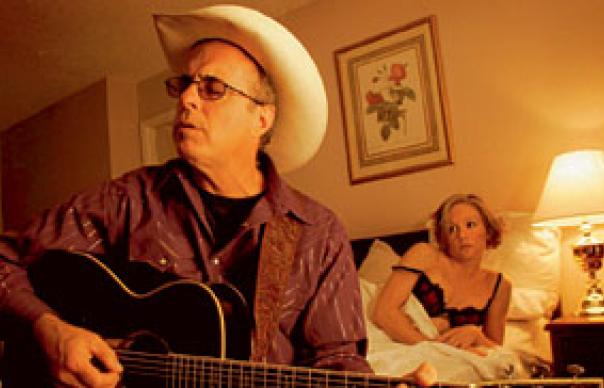 A musical companion to Russell’s forthcoming book Tough Company – poetry, short stories and the collected correspondence between the LA-born songsmith and Charles Bukowski – Hotwalker is a colossal achievement. Part Two of Russell’s Americana trilogy that began with his own ancestral folk opera (1999’s The Man From God Knows Where), this is a headlong journey into the soul of “the old America, where the Big Guilt, political correctness and chainstores hadn’t sunk in so deep”. Narrated and linked by Russell, it’s the lost post-war landscape of Beat pioneers, outsider poets and drunken angels – interspersed with snippets of Lenny Bruce, Bukowski, Ramblin’ Jack Elliott, hobo composer Harry Partch, Edward Abbey and Kerouac.

Most strikingly, it’s a carnival-midget speedfreak – Little Jack Horton – who plays Dean Moriarty to Russell’s Sal Paradise. The pair first met on a circus train in the ‘70s. Horton’s tall tales of lost weekends with Bukowski and stealing freight trains in the dead of night serve less as factual fodder than a musical voice on the scales of a disappearing world (indeed, Horton died shortly after his contributions here). The soundtrack is a grand sweep of American history: spooked parlour songs, Jesus ballads, loping carousel waltzes, Mexicali, raw folk-blues, country and squawking jazz. So a tough-love tribute to Dylan mentor and Greenwich Village Pope, Dave Van Ronk (with a snatch of the latter’s “Sportin’ Life Blues”) nestles alongside “Bakersfield”, a nod and a twang to Buck Owens, Gram Parsons and countless Okies “hopped up on moonshine and amphetamines”. The reefer madness of “Border Lights” dives into “that delicious dark-eyed myth” of 1950s Mexico, high on cheap rum and forbidden dreams.

Russell gets stellar musical back-up from Gretchen Peters (particularly on poignantly-rendered closer, “America The Beautiful”), Fats Kaplin on fiddle, accordion and pedal steel and Andrew Hardin on guitar, streaming into the recorded consciousness of Kerouac reading “October In The Railroad Earth” and Bukowski doing “On The Hustle”. They should seal this in a vault for posterity.