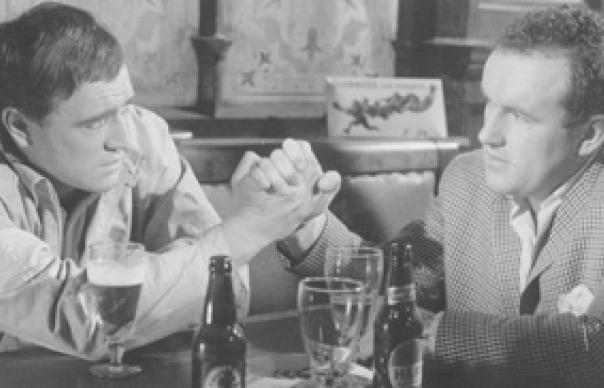 When Lindsay Anderson was making This Sporting Life, he must have felt like he was at the start of something important. Later – after the 1960s had exploded in the face of Austerity Britain – he would make his reputation with If…, where Malcolm McDowell applied the revolutionary spirit of 1968 to the public school system. But in 1962, the year before sexual intercourse was invented, he arrived as a film-critic-turned-theatre-director, waving the banner of the Free Cinema movement, watching and wondering about the possibility of a British New Wave.

Culturally, this was a serious moment. It was the time of the Angry Young Men and the kitchen sink drama. Free Cinema used documentary techniques in the service of truth. And the Angry Young Men, though diminished by their nickname, were a group of playwrights who sought to amplify the drama of ordinary lives. Anderson had directed plays in London’s Royal Court while his colleagues applied a new grammar to British cinema in Room At The Top, Look Back In Anger, and Saturday Night and Sunday Morning. Gone were the clipped accents and theatrical demeanor that had characterised British film, replaced by blunt urgency and Northern vowels. It was a matter of class, and a question of pride. Or, as Richard Harris puts it here: “It’s about time you took that ton of rock off your shoulders.”

This Sporting Life is all about Harris. Anderson originally wanted Sean Connery for the lead, but was dissuaded by the studio, so he fetched Harris from Mutiny On The Bounty and gave him free rein. Anderson’s diaries show the director was infatuated by the actor, who is allowed – or possibly encouraged – to dominate proceedings.

Harris won Best Actor at Cannes for his brooding portrayal of Frank Machin, a miner whose life changes when he signs on as the star of a rugby league team. With his Caesar haircut and his introverted rage, Frank is a transatlantic cousin of Brando’s Terry Malloy in On The Waterfront. But watch him examining his features in the mirror, and it’s the face of Travis Bickle you see staring back.

This isn’t a story about sport. Rugby league is employed as a symbol of upward mobility, and the violence that is required to achieve it. Frank is a tragic figure. He starts out modestly suggesting that “we don’t have stars in this game,” but quickly succumbs to the temptations of instant wealth. Still, he never looks comfortable in the world of money.

So far, so kitchen sink. But This Sporting Life is really a love story in which love is stifled. Frank is infatuated with his landlady, the widowed Mrs Hammond (Rachel Roberts). There is a terrible claustrophobia in the scenes when they are together, and when Frank finally succumbs to his instincts, he uses violence. There’s no nudity, but Anderson cuts the sex scenes in a way that makes them shocking – even now – and terribly ambiguous. Frank’s idea of romance looks awfully like rape, and he isn’t above knocking a woman in the face.

You could speculate about Anderson’s attraction to a story about forbidden love, but the shape of the film does nothing to encourage such a literal interpretation. With its flashbacks and its slow dissolves into Frank’s troubled psyche, it remains a cinematic manifesto. Anderson wanted a British film language that was as inventive as the French new wave, but with a stronger social conscience. Instead, he documented the beginning of the end of the post-war social hierarchy.

It wasn’t a pretty picture, and This Sporting Life failed commercially, sending Anderson back to the theatre for much of the 1960s. He didn’t start a movement, he ended one. The new wave was over before it began, and the kitchen sink was replaced by a more marketable symbol of social aspiration. Step forward Sean Connery’s 007.