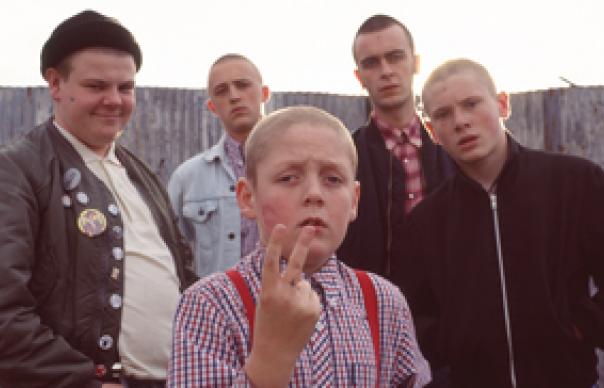 
PLOT SYNOPSIS:
England, 1983. Looking for attention and companionship, 12-year-old Midlands lad Shaun is adopted by a bunch of skinheads. All’s fine until psychotic racist Cosmo enters the fray, splitting the group and bringing Shaun into contact with the ugly, violent side of Eighties life – the far right and the rise of the National Front.
***

History tends to portray the skinhead movement as being a part of the far right. As director Shane Meadows’ knows only too well from his own experiences as a skin growing up in Staffordshire during the 1980s, it’s far more complicated than that. The movement’s roots lie in the rude boy culture of the West Indies, its music predicated around ska, soul and reggae; only elements of it were notoriously politicised by the far right. This Is England, Meadows’ fourth full-length feature, examines the rise of the National Front’s youth movement and its polarizing effect on a group of young skins in the summer of 1983, particularly its impact on a cheeky, 12-year-old lad, Shaun, played by Thomas Turgoose.
The film’s 18 certificate means Turgoose can’t attend any public screenings of the film, which is something of a shame. This Is England is at best a fantastic piece of social-documentary that deserves as wide an audience as possible, up there with Alan Clarke’s 1992 skin drama Made In Britain as a vivid and vital document of one particularly unpleasant aspect of 80s life.

Shaun’s father was killed during the Falklands war, and he lives with his mother in the kind of run down council estate in the Midlands that gives the term “public housing” a bad name. He’s chubby, precocious and picked-on at school. At the end of summer term, he falls in with a bunch of local skins, a semi-feral lot led by Woody (Joe Gilgun), who becomes the first of two father surrogates for Shaun. Woody’s named after Joe Strummer’s pre-101ers nickname, while the film’s title is lifted from a late period Clash single – whose lyric “Those British boots go kick Bengali in the head”, assumes a grim relevance later in the film.

Woody’s influence is arguably benign, and this section of the film – cut to a bunch of Toots & The Maytals songs – has a real warmth to it, as the kids fill out the balmy summer days playing street football or merrily trashing a brand new housing development. Meadows’ clearly likes his gang of rapscallions; for all their delinquency, they’re good-natured and there’s a certain innocence to their larks. Even when Shaun gets a No 1 buzzcut, Ben Sherman shirt, braces and a pair of DMs, his mother, though furious, understands that Woody is, at least, looking out for the little lad. It’s the arrival of the gang’s former leader, Cosmo (Graham), an incipient volcano of a man who’s just been released from prison, which marks the beginning of a far more dysfunctional and destructive relationship for Shaun.

Meadows used the idea of a young boy falling under the corruptive spell of an adult in his 1999 film, A Room For Romeo Brass, and This Is England follows a similar trajectory. Cosmo, with a head full of racist views, resumes control of the gang, encouraging them, in the film’s pivotal speech, to sign up for what he calls “the fight”. Woody and a few of the others leave, while the remainder – including Shaun – begin attending British Movement meetings in the back of pubs, where grey little men with bad haircuts unveil their unsavoury vision of a new England.

The relationship between Cosmo and Shaun is more than father-son, both of them have lost their fathers – at one point, Cosmo breaks down, screaming “What makes a bad dad? What makes a bad dad?”, Meadows’ suggesting his racism is somehow linked to a childhood trauma. It’s the kind of over-sentimentality that risks undermining the film’s authenticity; frustratingly, Meadows’ is reluctant to just let Cosmo be a [ital] naturally [ital] unpleasant person. After all, not everyone has to be emotionally fucked-up to be a racist.

Shaun himself is on the cusp of adulthood, at that age where kids ape adult behaviour, sometimes without necessarily understanding exactly what they’re doing. There’s a sweet scene early on in the film where Shaun escorts one of the girls, Smell, outside to a garden shed, about to embark on his first proper kiss. He considerately takes her hand and helps her down some steps – “Watch out, it might be slippery,” he says, in just the way an adult might. Later, when he threatens a Pakistani shopkeeper or harasses Asian kids in the street, its an darker side of the same process, Shaun here mimicking Cosmo.

Inevitably, the film ends in a blast of spectacular violence, Cosmo’s pent-up rage and self-loathing given full flight, Stephen Graham evoking the same intensity and raw physicality as Ray Winstone in Nil By Mouth.
Beyond comparisons with Made In Britain, you can see flashes too of Derek Jarman’s The Last Of England (1988), which similarly raged against life in Thatcher’s Britain. But the issues of race and national identity This Is England addresses have a contemporary urgency: England is at war, the far right is on rise, and immigration never seems far from the headlines.