Theory Of Obscurity – A Film About The Residents

The eyeballs have it in fascinating overview of anti-music’s longest, strangest trip 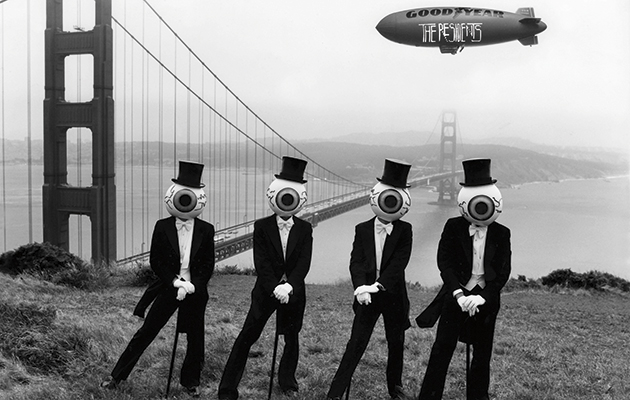 These days, if you threw a stick, you’d hit a dozen new music documentaries on figures great, cult and all-but unknown, and at least ten would be worth watching. Even so, the appearance of a film telling the story of pre-punk post-punkers The Residents remains particularly tantalising. Not simply because, for over four decades of strange, subterranean, determinedly dissonant, stubbornly DIY activity, these enigmatic avant-garde anti-rock pioneers operating out of California have been responsible for some of the most distinctive, challenging, gleefully stupid and downright disturbing records ever released.

Nor because, stressing the visual as much as the aural, it’s debatable whether they count as a “band” at all. Blurring artrock lines until they vanish, The Residents (proudly described here as “failed filmmakers”) seem closer to a rotating multimedia art collective, one whose entire project could be categorised as a sustained, by turns prankish and sinister attack on rock sacred cows including the very idea of the band.

The reason a Residents documentary is especially intriguing is more basic, and more complicated: namely, how do you make a film about a group most famous for secrecy? Outside their devoted army of fans, The Residents are best known for their anonymity, for being faceless, never speaking, appearing only behind masks. Many self-respecting music nerds would be pushed to name more than one or two of their 50 or so studio albums, yet most could identify them as the guys who wear the massive eyeball-heads and top hats, like aliens from a paranoid 1950s sci-fi trying to blend in by dressing like Fred Astaire.

In the 1970s, when The Residents name first began to spread, fans swapped rumours that those masks hid famous faces: everyone from ex-Beatles (whose vandalised images adorned 1974’s debut LP, Meet The Residents) to members of Talking Heads. By then, The Residents had acquired a management/ PR company, The Cryptic Corporation, whose members acted as their representatives on Earth. That their true identities have never been revealed is arguably The Residents’ greatest hit – although most people who care enough to want to know long ago came to the conclusion that, despite denials, the men behind Cryptic Corp and the men behind the eyeballs were one and the same.

Members of Cryptic past and present – remaining duo Hardy Fox and Homer Flynn, departed colleagues Jay Clem and John Kennedy – all sit for interviews in director Don Hardy’s film, and the strength of the documentary is its insider nature, although, as it goes on, this becomes its greatest weakness.

On the plus side, Hardy has free access to The Residents’ archive, meaning plentiful clips from brain-scrambling projects like the legendary, aborted Vileness Fats, a projected 14-hour musical shot on rudimentary monochrome video in the early 1970s that sits roughly midway between 1920s Dada and David Lynch’s early work.

Material from myriad video projects and live extravaganzas is the most stimulating stuff here, but the earliest, crummiest archive is perhaps the most striking of all: footage of their first live performance, when they stormed San Francisco folk hang-out The Boarding House in 1971, to bewilder singer-songwriter sensitivities with a performance that suggests an unrehearsed collision between their beloved Beefheart, The Fugs, and The Bonzos. What’s most startling today is that they are unmasked – although the primitive video quality provides grainy cover.

As a narrative, however, only this earliest section holds together, charting how, far from being Paul and George getting back together for a lark, The Residents originated as school pals in the suffocatingly conservative southern climes of 1950-60s Shreveport, Louisiana, then gravitated to California dreaming of psychedelia and getting laid. From here, the story slips frustratingly away.

With Hardy and his interviewees are intent on maintaining “The Residents” are not participating – Fox, Flynn, Clem and Kennedy refer to the band in the third person, and can only guess their motives and feelings – the insider nature results in them losing focus on the story. Events only fans will be aware of, such as the early-1980s “bust-up” between The Residents and Cryptic, are referred to without explanation or context. More damagingly, there is no overview of their output: what albums like Eskimo are like, why they might matter, is never discussed.

Still, as the roster of contributors suggests – everyone from Simpsons creator Matt Groening and comics guru Gary Panter, to Penn Jillette, Talking Heads’ Jerry Harrison and Devo’s Jerry Casale – it’s never less than interesting. But maybe an outside eyeball would have been of benefit.

EXTRAS: A great plethora of remastered clips of from the Residents’ video archive, extended interviews. 8/10