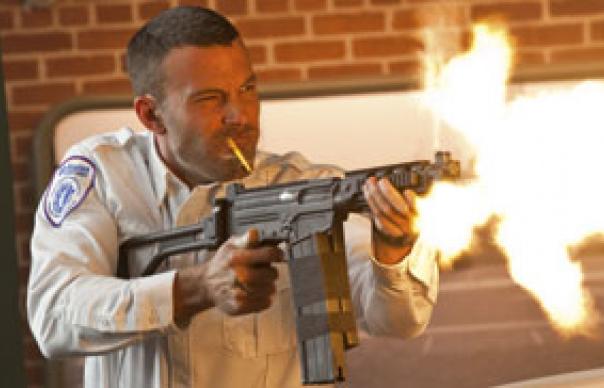 A likeable but volatile troublemaker from Boston has to choose between a promising future with his bright new girlfriend, or a wasted life with his irresponsible friends. Which film are we talking about here?

Really, it’s The Town – but it could just as easily be 1987’s Good Will Hunting, the celebrated drama that broke debuting co-writers and co-stars, Ben Affleck and Matt Damon. Since then, of course, Damon has become the thinking man’s action hero, piling up impressive CV credits like Syriana, the Bourne movies and Green Zone. Affleck, meanwhile, appeared to be going into slow decline after a string of disappointments – Daredevil, Gigli, Surviving Christmas. There was good work in Hollywoodland and State Of Play, but it wasn’t until Gone Baby Gone, his directorial debut in 2007, that it suddenly looked like Affleck had found a promising second act to pull his career back on track.

The Town, his second feature as a director, is a throwback to the hardboiled, character-driven thrillers from the 1970s and early 1980s. You might think of Sidney Lumet, say, or the young Michael Mann. Loosely adapted from Chuck Hogan’s novel Prince Of Thieves, it’s is a gangster film that follows genre conventions closely enough. Affleck throws in heists, car chases and plenty of explosive set-pieces – but between the action sequences, the protagonists ruminate soulfully on the damage wrought on them by their backgrounds and traumatic childhoods. It’s a movie that, in spite of some formulaic plotting, has commendable texture and emotional depth.

The setting is Charlestown, a run-down working-class neighborhood of Boston where the only viable local industry seems to be bank robbery. (In portentous intertitles and speeches from FBI agents, we’re told that there are over 300 bank robberies in Boston every year and that the Charlestown locals are responsible for most of them.) Affleck himself plays Doug MacRay, the leader of a gang of highly professional bank robbers. Between heists of armoured cars and bank vaults, Doug yearns for the life he could have had when he almost made the grade as a professional ice hockey player.

As in Gone Baby Gone, Affleck packs his supporting cast with redoubtable character actors. Chris Cooper is seen briefly but effectively as MacRay’s imprisoned father, a dour, woebegone man with a touch of Ahab about him who simply refuses to tell his son about the circumstances in which his mother went missing many years before. Equally striking is an emaciated but sinister Pete Postlethwaite (looking not unlike snooker star Alex Higgins in his latter Belfast bedsit years) as “the florist.” He spends his days pruning roses and plotting for his crews to carry out ever more outlandish robberies. Jeremy Renner (last seen tackling UXBs in The Hurt Locker) brings his usual livewire intensity to his role as Doug’s fellow thief, Jem, a tattooed psychopath who has a disarming streak of childlike innocence running through him.

Affleck has a Michael Mann-like fetish for minutiae. He pays exhaustive attention to the masks the robbers wear, the guns they use, their strange drawling Bostonian accents and their love of macho slang. During the robbery of a Boston bank that opens the film, we see MacRay and his masked crew taking the Blackberries from all the hostages, putting them in a bowl and pouring water on them. (Disabling cell phones wasn’t a problem that Al Pacino and John Cazale ever had to confront in Dog Day Afternoon.) MacRay’s team is nicknamed by the FBI as “the Not Fucking Around crew.” The thieves leave as little as possible to chance as they can, even working out how well (or badly) paid, fit and belligerent armoured car guards may be before embarking on a new robbery.

As in Heat or LA Takedown, the thief and the cop chasing him are near mirror images of one another. FBI officer Frawley (Jon Hamm) is just as aggressive and resourceful as MacRay. The two could switch roles in an instant and you’d hardly notice the difference. It’s a far less rewarding role for Hamm, though, than his part as advertising agency Loathrio Don Draper in TV’s Mad Men. He’s a lawman with a hint of Kevin Costner in The Untouchables and a strange, smirking relish for telling suspects about the sexual indignities they’ll suffer in jail.

The screenplay, which Affleck co-wrote, foregrounds the love affair between MacRay and the Boston bank manager Claire Keesey (Rebecca Hall) his gang briefly takes hostage. They meet in a laundromat. It turns out that she lives in Charlestown too. He is tailing her, wary that she may recognise him or his associates. At times, Affleck’s attempts as a director at combining romantic drama and heist thriller are a little strained. The symbolism can be heavy handed. Claire spends most of her spare time on her allotment, tending plants. Like MacRay, she is stick in a rut (she’s a middle manager, he’s a bank robber). Both are yearning for change and new growth. Affleck and Hall have an effective rapport but sometimes their scenes together seem to belong in a different movie.

The Town was produced by Graham King, who also initiated the project and hired Affleck. The British producer clearly recognised elements in Chuck Hogan’s novel that reminded him of his biggest success thus far, Martin Scorsese’s The Departed, likewise a Boston-set story pitting cops and mobsters against one another. What The Town lacks is the moral complexity that made Affleck’s Gone Baby Gone such an arresting debut. Adapted from a Dennis Lehane novel and starring Affleck’s brother Casey as a private detective searching for an abducted child, Gone Baby Gone was provocative and open-ended, deliberately blurring the lines between what is right and what is legal. By contrast, The Town is a little reductive.

But it’s to Affleck’s credit that he strives so hard to put a personal imprint on such generic material. A Boston local himself, he clearly has an intimate knowledge of the city in which the film is set. He also consistently foregrounds the less obvious elements in the story. There are constant oblique references to incidents in MacRay’s past that add to the character’s sense of mystery. We’re not quite sure why MacRay’s career as a would-be hockey hero unravelled and only very slowly do we build up a picture of what happened to his mother.

There is a juddering, brilliantly choreographed French Connection-style car chase through crowded streets and narrow alleyways, and the final reel heist at Fenway Park, the home of the Boston Red Sox, is an ingeniously staged, with huge armies of extras. More resonant than these set-pieces, though, are the character scenes. This is where Affleck really shows his credentials as an actors’ director with a feeling for dialogue and emotional nuance. The scene with Chris Cooper alone is worth more than all the shoot-outs put together.
Geoffrey Macnab