Back in the studio for the first time since they reformed 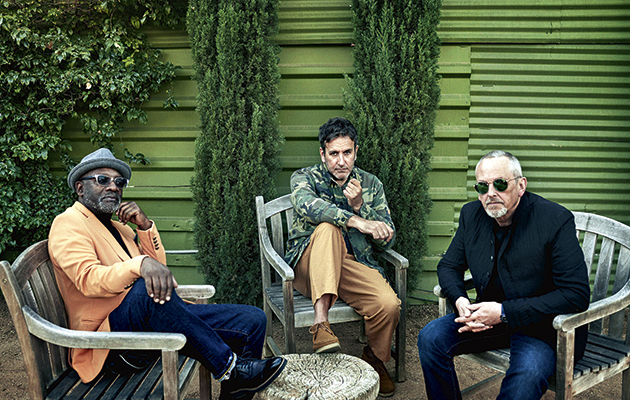 It’s been 10 years since The Specials got back together. Since then they’ve sold out venues from Sydney to San Francisco, from Tokyo to Toronto, and played prominent slots to huge festival crowds from GuilFest to Glastonbury, from Coventry City’s Ricoh Arena to Hyde Park. What they’ve not done until now, however, is write any new material. This might because the band’s principal songwriter, Jerry Dammers, wasn’t involved in the reunion – either (depending on who you believe) because he was forced out, or because he absented himself.

They’ve since shed a few original members – Bradbury died in 2015, Staple quit owing to ill health in 2012, while Byers (the band’s other prolific songwriter) left in 2014 – leaving just Hall, Golding and Panter as the core members. They’re joined by Danish pianist Nikolaj Torp Larsen (a seasoned session musician  who has worked with everyone from  Lana Del Rey to Elton John), along with jazz and reggae drummer Kenrick Rowe and Ocean Colour Scene/Paul Weller guitarist Steve Cradock.

Dammers once postulated that the band advanced so much between the first and second albums that it was like they’d shifted from With The Beatles to Sgt Pepper while totally bypassing, say, Rubber Soul. Weirdly, Encore serves as that imaginary intermediate album, a step up from the rough-and-ready monochrome world of the 1979 debut LP but not entirely comfortable with the garish esoterica of More Specials (1980). Its tracks can be split into three groups: cover versions, spoken-word tracks and ‘proper songs’.

Covers have always been an essential part of the Specials catalogue, and there are plenty on Encore. It kicks off with a fearsome, clavinet-heavy disco version of Eddy Grant and The Equals’ funky, multiracial anthem “Black Skinned Blue Eyed Boys”. The band also update an obscure 1967 Trojan track about gun crime, the deceptively jolly “Blam Blam Fever” by The Valentines; and even revisit “The Lunatics (Have Taken Over The Asylum)”, a song that Hall, Golding and Staples wrote as the follow-up to “Ghost Town” but ended up performing in the Fun Boy Three. Where the original was stark and minimal, this version, renamed “The Lunatics”, comes beautifully upholstered with antique Afro-Cuban strings and horns, with Larsen providing a lavish and suitably demented piano intro.

Another cover, of sorts, is “Ten Commandments”, a response to Prince Buster’s astonishingly sexist song of the same name. Where the 1965 original is a virtual manifesto for rape, murder, adultery and marital coercion (“Thou shall not provoke me to anger or my wrath will descend upon you heavily”), here the band enlist anti-EDL activist Saffiyah Khan to provide a feminist response, delivering her proclamations in a suitably blank Brummie accent (“thou shall not tell me what to wear or how to wear it”) over a space-age dub backing.

It’s one of three spoken-word songs on the album. “BLM” sees Golding conversationally reciting experiences of racism over a funk groove, while “The Life And Times (Of A Man Called Depression)” sees Hall deliver a brilliantly poetic, soul-baring monologue about mental illness  (“I refuse to succumb to what your vision of happy should look like”) over the suitably disorientating time-signature of 5/4.

That leaves just four ‘proper’ original songs. “We Sell Hope” is a gentle,  string-drenched plea for global understanding. “Embarrassed By You” is an extremely un-rock’n’roll response to teenage criminality (“We never fought for freedom for nasty little brutes like you,” spits Golding, directing his righteous anger towards moped muggers and knife-wielding hoodlums). “Breaking Point” subverts UKIP’s referendum slogan to attack everything from petty nationalism to smartphone addiction. Best of all is “Vote For Me”, a delightfully bitter little skank about the unreliability of politicians.

Even in his absence, Dammers haunts proceedings, with Larsen constantly referencing his riffs and his arrangements. “Vote For Me” starts with the eerie diminished chord sequence that Dammers used on “Ghost Town”; “The Lunatics” uses the kind of lavish orchestrations that Dammers employed on tracks like “Stereotypes”; while the eccentric, tuba-driven, Balkans-meets-Berlin cabaret of “Breaking Point” would have fitted comfortably onto the world music pastiches on More Specials.

Encore is a perfectly good record – it skanks and bubbles in all the right places, explores some interesting sonic territories, and features at least two tracks that will have live audiences singing along as if they were 40-year-old singles. But one can’t help but wonder how Dammers’ wayward genius might have added a level of glorious unpredictability to proceedings.