Their legendary album, plus 10 tracks of outtakes and ‘refreshed’ material... 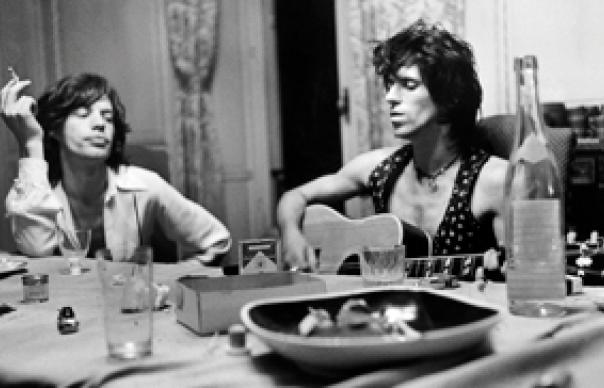 As chapters in Rolling Stones mythology go, the making of Exile arrives with particular hauteur.

The location: a grand manor on the Riviera (“a sunny place for shady people,” as Somerset Maugham called it). Upstairs, a revolving salon of celebrities and hangers-on. Below, a muggy, basement studio presided over by a junked-out Keith Richards. This was the crucible where the Stones would alchemise their masterpiece, an 18-track distillation of blues, soul, country, gospel and rock, all shot through with the Stones’ brand of carnality, vitriol and (occasionally) nobility.

While the sessions at Villa Nellcôte provided Exile with its core material and dense, crepuscular atmosphere, the album was the result of two years’ of sessions, stretching from London in 1970 to LA in early 1972, and called on a small army of session players to augment the five itinerant Stones. In particular, the female chorus added in the lengthy overdubbing sessions in LA helped to give a moody, gospel feel to several tracks.

With the release of this deluxe edition, the time frame of Exile’s creation expands some 37 years, since the 10 bonus tracks on a second CD include several that have added new guitars and vocals to the original templates. There’s a degree of confusion about how much tinkering has gone on (even speculation as to whether Mick Taylor returned to overdub some lead guitar) but in effect, there’s now half of a new/old Stones album on offer.

The joins between ancient and modern are not always easy to spot, though the cleaner sound of the opening tracks suggest the touch of producer Don Was, who was brought in to make sense of the jumble of old tapes, while versions of existing Exile numbers are clearly blueprints.

“Good Time Woman” – an early version of “Tumbling Dice” – typifies the Stones’ creative process, being a routine Chuck Berry work-out before Jagger wrote proper lyrics and the female chorus was added to what became Exile’s only hit single. “All Down The Line” (not on the album but likely to be offered as an iTunes extra) followed the same arc, from the boogie with bodged lyrics that’s on show here to the driving rocker that saw release. “Loving Cup” arrives with the same lyric sheet but a more languid, countrified tinge, while “Soul Survivor” has near identical musical backing but vocals by Keith Richards (in rather fine voice). With Mick Jagger yet to arrive from Paris and Bianca to pen his lines, Keith whines entertaining gibberish like “I may be a fool, but you had my tool” and “with my big blind eye and my swollen nose”.

Other intact survivals include “Title 5”, a bluesy instrumental with fuzz guitar – almost the Stones’ only surf record – and “Aladdin Story”, a cousin to “Paint It, Black” and one of Jagger’s put-down songs (“You think your love is all I crave/But I have better things to do than be your slave”). It might even predate the Nellcôte sessions. “Dancing In The Light”, also has the ring of an undoctored original. An almost jaunty piece with lots of stinging guitar, it lacks the haunted quality that would have found it a place on Exile’s final cut.

“Follow The River”, a bust-up song whose slow, sweeping piano recalls “Wild Horses”, has a brand new vocal and strings and is misplaced here, its mawkish balladry having more in common with Elton John than the murky atmospherics of Exile. “Pass The Wine” would also seem to belong to some other time and place, maybe Los Angeles, being a funky, Latinate strut with Fender Rhodes piano and cooing female chorus. Wherever it originated, it’s pretty fine.

“Plundered My Soul” has the same lumbering tempo and chord structures as “Tumbling Dice” though without a convincing hook, and sounds as if it’s been airbrushed up to date. More intriguing is “I’m Not Signifying”, a slow, dirty blues with Jagger delivering mumbled lines about “graveyard pearls” in an outrageous nasal Southern accent and musing “have you ever had the feeling baby, you’ve been here before?”. Some suspiciously bright guitar suggest it’s been tweaked. As for Jagger’s vocals, we know that he was prone to hamming it up on country numbers like “Sweet Virginia” – Mick never shared Keith’s regard for George Jones and Merle Haggard.

Exile itself remains the tour de force it’s been since release in May ’72. Although it was an instant best-seller, the divergent moods of its 18 numbers (albeit sequenced into four themed vinyl sides) took some digesting, and critical reaction was initially lukewarm. With only “Tumbling Dice” as a hit, Exile’s numbers also proved less amenable to on-the-road treatment than the standouts from Beggars Banquet, Let It Bleed and Sticky Fingers. Where the sharp pop edges and mannered attitudes of those albums have not always aged well, Exile’s tradition-steeped sound has matured, whether it’s the jagged blues of Slim Harpo’s “Hip Shake” and Robert Johnson’s “Stop Breaking Down” or the spooky gospel of “Just Want To See His Face”.

Beneath the murky sound and muddy vocals there’s a musical chemistry at work; never again would Richards and Mick Taylor provide such elegant foils for each other, Keith producing killer riffs, Taylor hitting sparky solos. With Jagger, Charlie Watts and Bill Wyman all semi-attendees, many of the tracks in Nellcôte were hatched by the coterie of Richards, Taylor (often doubling on bass), Bobby Keys and producer Jimmy Miller (on drums).

Perhaps another reason for Exile’s endurance is that its fevered atmosphere often seems to describe the Stones and their milieu. Alongside Keith’s signature autobiography, “Happy”, and Jagger’s cutting portrait of Brian Jones on “Shine A Light” (“A smile on your face and tear right in your eye”) there are numerous tastes of moneyed decadence refracted in lines like “Oh what a beautiful buzz”, “diamonds, vaseline and disease”, “kissing cunt in Cannes”. Beyond its musical prowess, Exile is also a snapshot of the beautiful and the damned, a piece of 20th-century mythology that’s lost none of its power to seduce.
NEIL SPENCER