The complete works of alt.country pioneers corralled into a career-spanning boxset 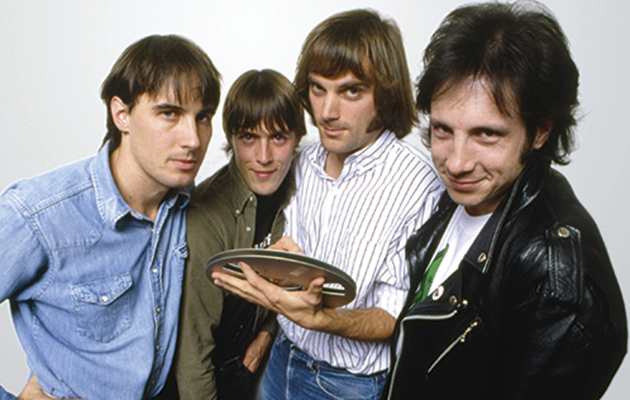 There are many kinds of three-chord horseshit, and The Long Ryders tried them all. Famously, they perverted country and western, but the plan was always more complicated than that. When Sid Griffin left his LA garage group in the early 1980s, he placed a musicians’ wanted ad which read: “Two ex-Unclaimed members want the Byrds, Standells and Seeds to ride again.” Another ad, the one that attracted singer and guitarist Stephen McCarthy, proposed a merger of the Buffalo Springfield and the Clash.

Over four albums released between 1983 and 1987, The Long Ryders made good on all of that, being both musically diverse, and singular in their intentions. They were country, and punk, and rock’n’roll. They did foot-on-the-floor boogie, cajun, a bit of psychedelic rock. They wore their fringes like Roger McGuinn. They were Tom Petty, without the heartbreak.

All of which helps explain what was brilliant about The Long Ryders, and why they failed. Operating in Los Angeles at a time when new wave was morphing into vainglorious pop, their influences were considered old hat. Equally, the bands the Ryders inspired were yet to take flight, with the exception, perhaps, of their near-contemporaries The Jayhawks, who were thinking along the same lines in Minneapolis.

What’s clear now is that the Ryders are the bridge between country rock and what became Americana. Listen to early Uncle Tupelo, and you’ll hear Jeff Tweedy and Jay Farrar working out how to render American roots music with punk energy. And the influence didn’t just flow into the furrows of alt.country. Listen to the The Long Ryders’ acoustic rendering of “Black Girl” (from May-June 1984) included on Disc One of this four-disc set, and it’s hard not to hear Kurt Cobain’s unplugged version of the same song, though he called it “Where Did You Sleep Last Night?”.

They weren’t thanked for it at the time, as is clear from “Encore From Hell” which closes Disc Two. It’s not a song as such. Instead, singer Sid Griffin reads out reviews of the band’s 1985 album State Of Our Union. “It’s so difficult to know where to begin,” begins one, “there’s just so many bad things to say.” Or: “There are 10 things wrong with this album, and they’re all the songs.” Or, Griffin’s favourite, a one-sentence demolition from the Northern Echo: “If these guys are at the helm of West Coast rock, abandon ship.” And, yes, another reviewer settled for “three-chord horseshit”.

The Ryders weren’t without their supporters at the time, of course. They were part of the Paisley Underground – a label coined by Michael Quercia of The Three O’Clock to encapsulate an LA scene incorporating The Rain Parade, The Bangles and The Dream Syndicate. That scene was real, and got much press attention, especially in the UK and Europe, though it never went overground.

The box contains all three of the albums The Long Ryders released during their lifespan, and their debut EP, 10/5/60, which is still a career highpoint. From the declamatory “Join My Gang”, through the Byrds country of “You Don’t Know What’s Right” and the chiming psychedelia of “And She Rides”, the record showed a band clicking into focus. The title track is pure garage rock, with a riff and a snarl. If they played it any faster it would be Hüsker Dü.

The first LP, Native Sons (with West Coast producer Henry Lewy reprising the Flying Burritos template) is simply gorgeous, from the Chuck Berry motorvating of “Run Dusty Run” to the Petty-ish infections of “I Had A Dream”. There’s no disguising the influences at play on “Ivory Tower”, which has Gene Clark guesting on it, but that doesn’t make it any less effective. The extras add depth. There’s a fine acoustic run through “The Wreck Of The 309”, which leaves the pain in Tom Stevens’ vocal exposed. And the ghost of Gram Parsons is exorcised in a sparse campfire rendering of “Farther Along”.

A live version of “You Can’t Judge A Book By The Cover” has the Ryders sounding like Dr Feelgood saluting Chuck Berry, so it’s perhaps not surprising that pub rock veteran Will Birch was engaged for their major-label debut, State Of Our Union (1985). It opens with the hit that wasn’t – “Looking For Lewis And Clark” – and rattles through a series of melodic anthems. The songs are broadly critical of Reagan’s America, though the politics are masked by the straightforward urgency of the tunes. There’s more than a hint of The Cars in “Here Comes That Train Again”, but the sentiment of “Good Times Tomorrow, Hard Times Today” makes it a timeless piece of country rock, and the harmonies on “Two Kinds Of Love” are gorgeous. The ballad “If I Were A Bramble And You Were A Rose” and the “Captain’s mix” of “Lights Of Downtown” are equally lovely, and quite at odds with what was popular in 1985.

On the final album, 1986’s Two Fisted Tales, Ed Stasium removes the rough edges and adds a bit of Petty-ish swagger, and Griffin offers some hint of his future direction on the folky “Harriet Tubman’s Gonna Carry Me Home”. Disc Three includes nine fine demos including McCarthy’s lovely ballad “He Can Hear His Brother Calling”, which is among the best things the band ever did.
For fans, though, the real treasure is Disc Four, a live set recorded in Goes, in the Netherlands. It starts at full pelt with “Mason Dixon Line”, and never relents, rushing through “Masters Of War” and ending with a breathless “Tell It To The Judge On Sunday”. The Long Ryders add power to Dave Dudley’s trucking anthem “Six Days On The Road”, and hail their garage roots with an urgent reprise of the Flamin’ Groovies’ “I Can’t Hide”. The whole thing is a rush of ringing guitars and fire engine melodies that is retro and futuristic and timeless.

“I won’t give you any false modesty,” Griffin suggests. “We didn’t have flamethrowers, we just had a rockin’ act that was kinetic.” The world may now be ready to listen.

Q&A
Sid Griffin on the long march of Americana
What was your plan for the box?
We want The Long Ryders to be acknowledged as a very important link in the chain. When we came out it was all Haircut 100 and A Flock Of Seagulls. It was synth pop and watered-down dance music which was in the way. We were really the first and almost only band of our ilk doing this crazy wedding of punk ethos ethos and country and western attitude. In just a few years bands we inspired were everywhere: Uncle Tupelo and the Black Crowes – who were Mr Crowe’s Garden, an opening act for us – the list goes on.

Did you feel like you were in a wilderness back then?
In the early days we weren’t that distinct, and we had this idea of crossing Ramones, Sex Pistols, Clash, and earlier punk, ’60s garage guys – the 13th Floor Elevators and the Standells – with country and western instrumentation of pedal steel or banjo and having a new American hybrid. The first time we played a country and western song to a blatantly punk rock audience was at the Music Machine in West LA. I think we were on the bill with the Circle Jerks, and for the first 30 seconds people couldn’t believe it. It was just wild. There was silence. After a minute there was this noise, some of the people were going bananas and some of the people were making fun of us and spitting at us. That was the first time – playing “Brand New Heartache” by the Everly Brothers as a shuffle. I remember once at the Louisiana State University in Baton Rouge, the guy said, ‘Go and play something on the air’. So I went to the library, and there was all these LPs on the wall, and they had a white sticker saying what the tracks were. I pulled out a Long Ryders record, and some kid had written on it – ‘Side A: Sounds like shit. Side B: mostly sounds like shit.’ It was that hard of a battle.

Was the Paisley Underground real?
It was. It’s unfortunate that more of it didn’t break through to a wider audience. The only band that broke through was The Bangles. But it was an amazing time. Imagine living in an idyllic, sunny Los Angeles. I shared a house with one of The Bangles, and a roadie. And in our house at that time we’d have Eric Burdon of the Animals staying, and Billy Bremner of Rockpile was a roommate for while. Around the corner was Steve Wynn of The Dream Syndicate, and two of the guys from Green On Red, John Doe and Exene Cervenka of X lived about a block and a half away. Dwight Yoakam lived three blocks the other way. Benmont Tench lived four blocks away. People would ask me, of the people you knew, who did the best? For a while I would say The Bangles, then maybe Dwight Yoakam. I had a roommate named John Silva, he went on to manage Nirvana and the Foo Fighters, so I used his name for a while. Then I thought, hang on, Matt Groening from the Simpsons was around the corner, he did a cartoon called Life Is Hell. He’d come down from Oregon and Silva had come out from Boston, I’d come out from Kentucky, just trying to make it. All in one neighbourhood. It was a beautiful time.

Where did it all go wrong?
We famously did a beer commercial and were accused of selling out. It really backfired in North America for us. Peter Buck gave an interview commenting about it, and even Green On Red teased us. What I didn’t understand was that X, Los Lobos, The Blasters, all sorts of bands did a beer commercial, so why pick on us? The reason we did it then was we weren’t getting a lot of airplay. The most profile we got in the United States was through this beer commercial.

Why wasn’t “Looking For Lewis And Clark” a hit?
Nick Stewart, who’s the guy who signed U2, was so forceful in a business meeting, he finally got Island to agree to put a lot of money behind the record. It did really well the first few weeks. Then Nick was told by one of the Island guys, who looked really depressed: “I know we agreed to spend this money on pressing up more singles, but I left the meeting knowing my marching orders and didn’t do it.”. So it sold out and there were no more records to buy, literally. For years I was really upset about it. Some really nasty stuff went down. Then I thought, that’s not the way to look, because we had seven years travelling the world and playing on bills with people like Gene Clark and Roger McGuinn. All these great things happened. How many people from a little town in Kentucky got to do what I did? I’ve even thought: what happens if we had gone through the roof and everybody got on drugs and hated each other? We’re all really close still, so I can’t complain.
INTERVIEW: ALASTAIR McKAY