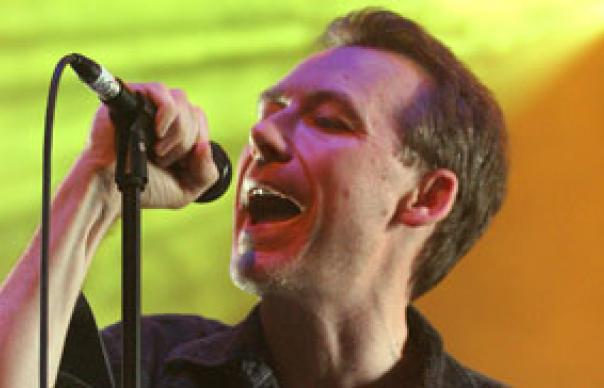 The last time I saw The Jesus And Mary Chain was in Glasgow, back when they supported Primal Scream on the XTRMNTR tour sometime around 1998. Then, Jim and William Reid’s fractious relationship had pretty much reached breaking point, a tired and wired Jim having something of an episode on stage, smashing things before storming off. It was their last UK date, the band imploding a few months later on stage in Los Angeles.

That the two brothers managed to patch up their differences and have locked in a number of festival dates, and a tour including shows at Brixton Academy, could be construed as something of a minor miracle. Tonight’s show, as part of Jarvis Cocker’s Meltdown festival, is the JAMC’s first UK date in close to a decade, sold out in minutes. Always one to spot a canny theatrical opportunity, Jarvis himself appears spot-lit in one of the boxes to introduce the band before they emerge through banks of dry ice spilling off the stage and launch into their second single, “Never Understand”.

While consensual opinion remains that their debut album, Psychocandy, is their high water mark, it’s clear from this career-spanning set that there was a lot more to them besides. “Head On”, “Far Gone And Out”, “Sidewalking”, “Happy When It Rains” are dispatched with snarls, greeted with cheers. “Blues From A Gun” – favourite lyric: “I’m a stone-dead tripper dying in a fantasy” – is belted out, along side a new song, “All Things Must Pass”.

Jim and William look happy and healthy, while the rest of the band – including UNCUT’s own Picture Researcher Phil King and former Ride drummer Loz Colbert – tear voraciously into the material. In fact, I forgot how good a drummer Colbert is, and the minute I got home I’m digging out Ride’s “Dreams Come Down” for his fantastic drum intro.
For “Just Like Honey”, the band are joined on stage by Leila Moss from The Duke Spirit. I’d have been happy with Kate Moss, but there – this was Glastonbury weekend.

They encore with Syd Barrett’s “Vegetable Man”, backed with “You Trip Me Up” and a growling, snake-hipped “Reverence”.
Good to have you back, chaps.

Vegetable Man
You Trip Me Up
Reverence