The Incredible String Band – Tricks Of The Senses 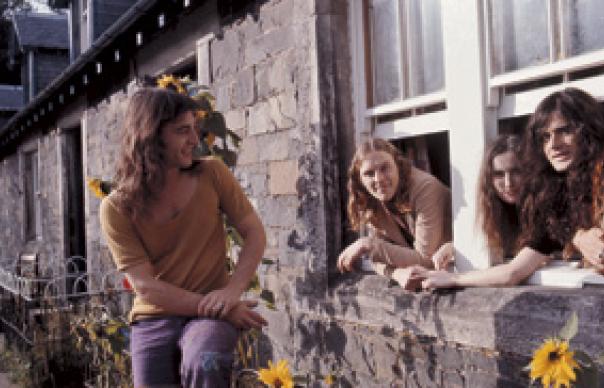 Modern ears frequently can’t get past the more frivolous side of The Incredible String Band: the Gilbert & Sullivan silliness of “Minotaur Song”, or the fuzzy-felt folk of “Painting Box”. Which is a shame, because if you listen beyond the mimsy and screen out the velvet loon pants, you find a group whose trial-and-error traversal of world religions and alternative spirituality are conducted with such poetic fervour, it makes the music of most other late 60s mystics sound spiritually malnourished. This 16 track compilation of rarities and unreleased music, spanning six of the group’s eight years, leans relatively heavily on their questing and experimental side, with enough tomfoolery for light relief.

Fans have long hoped for outtakes from their most celebrated album, The Hangman’s Beautiful Daughter. This definitive trawl of the Witchseason and Island warehouses by ace ISB investigator Adrian Whittaker turned up nothing from the 1968 classic. Instead he’s pulled together a mix of alternate studio takes, live recordings, an astonishing American radio session, and a Leadbelly song from the coveted, long-undiscovered ‘Balmore hoard’, the earliest home recordings by Mike Heron and Robin Williamson as a duo, on which they announce themselves as “poets and players, and prophets from the North”.

“Lover Man”, left off 1967’s 5000 Spirits Or The Layers Of The Onion, shows the paradox that it was Heron, the rock ’n’ roller, who sang out like a trad hollerer, while Williamson, the Scots folknik, exploited the intimacy of the microphone for his bardic odysseys. In “The Iron Stone”, an alternate take of the acoustic raga from Wee Tam And The Big Huge (1968), Williamson describes finding a lump of meteorite that acts as a magic portal to a mental carnival of Atlantean beings. Much of the surrounding folk-rock – from Van Morrison’s “Cyprus Avenue” to Shirley Collins’s Anthems In Eden – contained similar time-travelling leaps, but few stage-managed the illusion with such arresting panache.

The May 1968 session for WBAI’s Radio Unneameable show is a fascinating time capsule of the era: host Bob Fass clears the air with Tibetan gongs and drums, before Williamson recites his mystic poem “The Head”, backed by recorders and dippy flutes. This, and the “Poetry Play #1” which appears on CD2, is an experimental, freeform String Band that never made it to vinyl. “See All The People” shows off the duo’s deft, gossamer guitar interplay, while Heron’s “Douglas Traherne Harding” is a homily lodged in a parable secreted in a conundrum. CD1 closes with “Maya”, a gnomic paean to the Hindu goddess of illusion. Because the original Big Huge version cuts off in mid-jam, it’s one of the most hotly contested tracks in the canon. This radio version helps lay the controversy to rest; the saffron buzz of its agitated sitar is allowed to wind right down to an idling coda.

The break between the two CDs effectively rings down the interval curtain between the String Band’s first and second phases. “All this world is but a play/be thou the joyful player”, they had chorused in “Maya”. After 1969 they awarded girlfriends Likky McKechnie and Rose Simpson full group membership; signed up to the Church of Scientology; joined forces with Stone Monkey, former prancers extraordinary at UFO and Middle Earth; and indulged a group passion for theatrics with U, an indulgent psychedelic mummery produced at London’s Roundhouse and across America in 1970. Culled from a noisy tape of their Roundhouse residency, U is represented by the camp swashbuckler “El Ratto”, whose punning text is declaimed with relish by Williamson, and the brief ballad “Long Long Road”, neither of which appear on the album of the show. Continuing the amateur dramatics, “Queen Juanita And Her Fisherman Lover” (a missing track from 1970’s I Looked Up) will either seem charming or drawing-room twee, depending on how high you’ve calibrated your threshold for briny 16-minute melodramas featuring Ondes Martenot, wave machine and giggling recitative.

The compilation is wrapped up with two cuts from the 1972 Earthspan sessions. “Secret Temple”, written and sung by Likky, starts in Mo Tucker mode and develops into a serpentine roundelay for shenai and minimalist piano. “Curlew” is a crystalline chamber-folk instrumental whose Hardanger fiddle and penny whistles point towards Williamson’s destiny as a Celtic troubadour and storyteller.
All in all, this collection of ones that got away is far from barrel-scraping stuff: a rarities collection to be savoured alongside Joe Boyd’s long-awaited remasters of the Incredible discography, due later this year.

UNCUT Q & A With Robin Williamson

UNCUT: Did you enjoy rediscovering these forgotten tracks?
RW: Yes, the surprise for me is the rehearsal of “Relax Your Mind”, that’s come out of somebody’s back cupboard. That was never intended for issue, but it has got a nice, fresh, funky sort of feel to it. And the Likky song, “Secret Temple”, is very good. And so is the instrumental “Curlew”, which I’d forgotten about completely.

“The Iron Stone” seems to have stayed with you throughout your career.
I’ve recently re-recorded that again for ECM. I still have the iron stone – I think it’s a meteorite, I found it on the beach at Cramond, near Edinburgh. It had come from so far away, from outer space, and it seemed to be carrying this atmosphere of parallel worlds and possibilities.

Did your theatricals with Stone Monkey reflect the madness of your own lives at the time?
Actually it was quite like that, yeah. U was something that grew that winter. The loch froze solid, and you could drive a car over it, spinning round and round in circles.

Do you still consider music a spiritual journey?
At the age of 65, the notion of what we’re doing in the world at all, and the miracle of being alive, and our destiny as spiritual entities, is what concerns me more profoundly than anything else. Me and my wife Bina are working together doing seasonal programmes doing precisely that. And we’re having a tremendous time doing it.