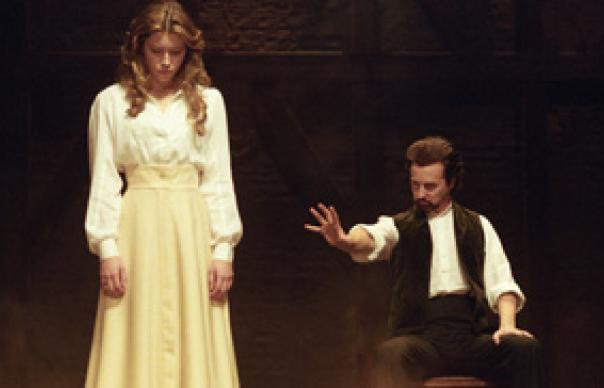 
A brilliant turn-of-the-century magician whose tricks disturb and amaze. This premise may sound strikingly like Christopher Nolan’s recent period drama The Prestige, but The Illusionist isn’t simply a case of the kind of Hollywood synchronicity that sees volcano, asteroid and Truman Capote movies seemingly being made in pairs. Though it shares a similarly dreamlike sense of period with Nolan’s film, Neil Burger’s elegant mystery is more about magic than sleight of hand, flirting with supernatural Victoriana where Nolan plumped for alchemy and even (albeit in the rather bizarre form of the physics supplied by David Bowie’s Nikolai Tesla) science.

Ed Norton stars as Eisenheim, a poor boy who’s risen from his roots to become Vienna’s premier illusionist. Eisenheim offers a gateway to the unknown, raising spirits and phantoms, but his elaborate routines irk the Crown Prince (Rufus Sewell), who hires lapdog Chief Inspector Uhl (Giamatti), himself an admirer of Eisenheim’s stagecraft, to discredit him. The intrigue that follows is wonderfully staged, with Norton on fine form as the intense, weirdly charismatic Eisenheim and Giamatti as the perfect foil, playing the unwitting straight man in a fantastical double act. The final twist may have as much to do with such mundane influences as The Usual Suspects as any late-19th-century phantasmagoria but The Illusionist is a far from everyday thriller, a bewitching maze of mist, myth and cobblestones.