The Hold Steady – Boys And Girls In America 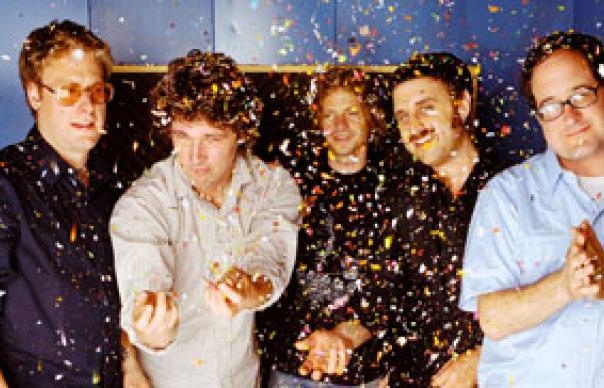 I don’t know if Boys And Girls In America is rock’n’roll as literature or literature as rock’n’roll. Either way, you could write a book about what’s going on here and the two albums preceding it that have made The Hold Steady the most talked about band in America right now.

Praise for the Brooklyn-based, Minneapolis-reared quartet’s crunching rock and Craig Finn’s amazing songs has come from all quarters. The buzz started with the 2004 release of their first album, The Hold Steady Almost Killed Me, which the admirable Chuck Klosterman in Esquire selected as one of the top albums of the century so far. It was also included on best of the year lists in Blender, Rolling Stone and Spin. Their second album, Separation Sunday, meanwhile, was raved over in the New York Times by Jon Pareles and they were the first band in 15 years to appear on the cover of New York’s Village Voice.

The Hold Steady Almost Killed Me was a sprawling epic about teenagers, drugs, derangement, despair, murder, spiritual rot and the redemptive power of rock’n’roll, the profane poetry of Finn’s lyrics set to the firestorm riffing of Tad Kubler’s guitars. The pair had first played together in Lifter Puller, art punks apparently, who made a lot of noise but little money on the Minneapolis bar band circuit that had earlier hosted wild nights by local heroes like Hüsker Dü and The Replacements. When Lifter Puller split, Kubler relocated to Los Angeles, joining Finn a year later in Brooklyn where they formed The Hold Steady.

Within months they’d recorded Almost Killed Me, which introduced us to Holly, Gideon and Charlemagne, the three characters whose strung-out desperate lives are central to Finn’s songs and whose stories are brought up to date on Boys And Girls In America. They’re druggy misfits who probably grew up listening to The Replacements’ Sorry Ma, Forgot To Take Out The Trash and wondered in baffled awe how Paul Westerberg knew so much about them and their mall-rat lives. On Separation Sunday, especially, they go on dreadful benders, seek salvation in whatever drugs are available, getting high their only real imperative, have lots of unhappy wanton sex, are driven to madness, Christ and each other by confused and choleric urgencies.

The songs on the early albums were densely-written, with more words in their lyrics than virtually anything since the young Springsteen of Greetings From Asbury Park, NJ. They come at you in a torrential rush, full of brilliant images, many of them recurring from song to song across the two albums. It’s a trick that works here on Boys And Girls, too, key lines repeated, Finn given to a testifying vocal rapture, a brutal urban echo of Van Morrison’s sense of natural wonder.

On Boys And Girls, though, Finn’s writing is sharper than ever, the various narratives driven less by the wordy exposition of yore than acute observation, devastating detail, by turns exclamatory, epigrammatic and grainily authentic. Songs like the delirious opener “Stuck Between Stations”, the brutally jaunty “Hot Soft Light”, the corrosive “Party Pit” and the sulphurous waltz of “First Night” are a toxic mix of Springsteen’s cavernous romanticism and the grim verité of something like Lou Reed’s “Street Hassle”. Soiled vignettes, in other words, of lives in the teenage wastelands, given up to fleeting sordid pleasures and piss-stained dreams of better times that never arrive.

Musically, too, The Hold Steady are tighter, wholly as exciting at times as the E Street Band in their turbo-charged prime; several tracks are punctuated by rollicking keyboard parts from Franz Nicolay that recall Roy Bittan’s work with Springsteen’s rowdy crew. The Hold Steady have frankly never sounded bigger or more furiously robust – this is often deafening arena rock, unashamedly so, a ferocious methamphetamine rush, urgent, at times almost out of control, a vast swampy roar. It’s a holy noise that runs from bone-crunching riffs that recall the Stones, Thin Lizzy, AC/DC, the E Street boys and Replacements, to swaggering doo-wop harmonies, hook-filled garage band pop and a dynamic clout that more than once recalls the hardcore rancour of This Year’s Model.

Like Richmond Fontaine’s Willy Vlautin, Finn’s inspired as much by literature as rock’n’roll – the album’s title is inspired by a line from Jack Keruoac’s On The Road and “Stuck Between Stations” turns out partly to be about the suicide of the great American poet, John Berryman (as much, perhaps, an influence on Finn as the writer Delmore Schwarz was on the youthfully impressionable Lou Reed). There’s nothing starchy or stuck-up about this, however – Finn’s writing is rich in common vernacular, slangy, conversational, often very funny and illuminated by a white-hot attention to detail. It’s the kind of language you might overhear in bars where people go to drink and die, poetic in its grungy perfection but never merely fanciful or artfully abstract.

They swell with charred truth, these songs and rock like there’s no tomorrow. Which, when all is said and equally done, there won’t be for Holly, Gideon and Charlemagne, the world going up in flames around them.Welcome to the first great album of 2007.