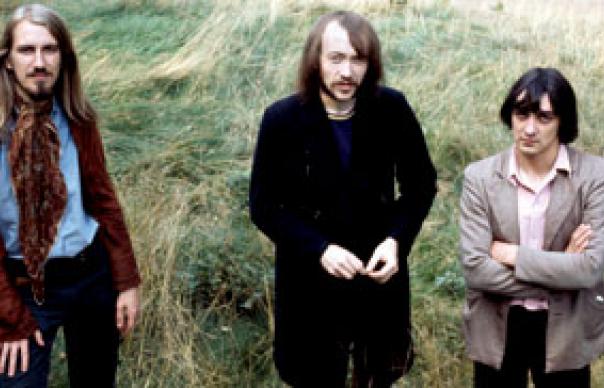 It was customary for British bands in the late 1960s to have the blues – but it was only the Groundhogs who really battled them. Having started life in the early 1960s as a dues-paying, John Lee Hooker backing four, by the mid-1970s, they had become a trio who supported The Rolling Stones, had three Top 10 albums – only to develop a baroque quasi-funk, just in time for punk. Just as they finally won the battle, the war, so to speak, moved elsewhere.

Thank Christ For The Groundhogs is a three-CD set that recounts the highpoints of their campaign. Since the demise of the definitive power trio – bass player Pete Cruikshank, drummer Ken Pustelnik, and guitarist Tony McPhee – in the mid 1970s, the band has enjoyed a double life. Their terrestrial selves play on the pub circuit. Their records, however, enjoy a glowing reputation among the likes of Julian Cope, Comets On Fire, Steve Malkmus, and Mark E Smith – inspired, one would think, by the band’s schizophrenia, their unspooling riffs, and laconic reportage.

Essentially, the Groundhogs made music for generations of freaks, without being particularly freaky themselves. Based around the blues-derived playing of Tony McPhee, (never a drug-taker; his hobbies included mending electronic equipment), theirs was music that, if anything made a virtue out of this British reserve. Not just great musicians, the Groundhogs were also acute songwriters: and having sketched images of war, class obedience, suburban life, the band’s torrential playing was ripe to break free from them.

Still, listening to the band’s first two albums, the Mike Batt-produced Scratching The Surface (recorded in a single afternoon in 1968) and the fractionally more deranged Blues Obituary (1969), only a staunch believer would have predicted the stylistic leap that the band were shortly going to make. An outfit from the same blues scene that gave rise to Clapton and the Yardbirds, they were undoubtedly authentic, but sound, retrospectively hugely constrained. Maybe they had the blues. But at this point, it sounded more like the blues had them.

For Thank Christ For The Bomb (1970) and Split (1971), however, something great happened, and it becomes helpful to think of the Groundhogs as a hybrid of The Kinks and The Rolling Stones. Like the latter, they were fans of American R’n’B, who had moved on, lessons learned. Like the former, they had made their escape by mining their own cultural identity. Thank Christ…is in part a British Tommy’s psych album, part a tour of English “types”. Half of Split, another concept, is an account of a psychedelic experience during an Indian meal.

It’s what the band make of McPhee’s songs, (like “Strange Town”, later covered by The Fall or the inspirational “Split Part 2”) that show what the Groundhogs were all about. To hear them in such moments is to hear musicians in full exploratory flight, McPhee’s guitar playing and Pustelnik’s free-roaming drumming setting them on the same paths as Cream, and The Jimi Hendrix Experience.

Having scaled such heights, it’s perhaps no wonder that the band’s next album Who Will Save The World – The Mighty Groundhogs, should see them assuming mythical powers. Certainly, inside, they attempt the impossible: from Mellotron Skiffle (“Earth Is Not Room Enough”) to Cartesian Indie (“Body In Mind”), and mostly pull them off. The album was another Top 10 success, but was the last to feature the original lineup.

Q+A
Tony McPhee
Your sound changed a lot, didn’t it?
Scratching The Surface was nearly all derived blues, changed a bit. For Blues Obituary… the blues had its second popular time, and we realised it was going out again. I wanted the songs to be listenable later on…

The original trio was very powerful…
We definitely loved improvising. Whoever was having a good night we’d call on them, “Right, it’s your turn…” But what used to happen was I would go off at a tangent, and wouldn’t be able to find my way back. Ken [Pustelnik] would do this weird drumming, which is what he does, and Pete was playing harmonic basslines. I got rid of Ken initially, because he annoyed me intensely. We tried in 2004, to get back together, but he pissed me off again. I said to Pete, ‘I can’t do this any more.’ I left him a message and went down the pub.

You’ve got some interesting fans…
I didn’t realise that a lot of punks were well into The Groundhogs. Captain Sensible is one of our staunchest fans, and Mark E Smith is a big fan too. It’s very weird.
INTERVIEW: JOHN ROBINSON