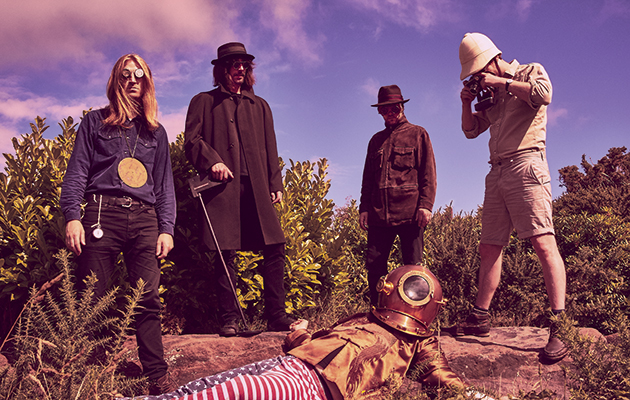 Until the 1930s, for nearly half a century there was a parliamentary constituency in Liverpool that chose to ignore the prevailing British political trends and returned an Irish Nationalist MP to Westminster. This regional bloodymindedness has long been a fixture of the city’s music scene. When punk hit, Liverpool’s hipsters were listening to baritone crooners such as Jim Morrison and Scott Walker; at the height of synth pop and New Romanticism, Scousers dug deep into the jangly guitars of 1960s psychedelia. As the 1980s wore on, Merseyside’s young football fans were wearing flares and listening to Pink Floyd and Frank Zappa.

The Coral are reluctant to see themselves as a Liverpool band – they’re from Hoylake, across the Mersey at the tip of the Wirral – but they seem to embody the sonic otherness of this weird maritime city state. Even when they released their first album in 2002 – as teenagers who still trundled around on BMX bikes and lived with their parents – they were gleefully citing contrary influences such as Nat King Cole, Johnny Mathis and The Four Freshmen to bewildered journalists.

Now, on their first album in six years, their interests in freak folk, doo-wop and skiffle have been replaced by other influences – the sludge rock of Black Sabbath, the trance metal of Hawkwind, the metrical beats of Krautrock. Assisting them in this change is the slightly wayward guitar playing of Paul Molloy, formerly of kindred spirits The Zutons, who joined the band halfway through the LP to replace guitarist Lee Southall, currently on hiatus.

The band have still been active throughout this apparent furlough. In 2014 they quietly released The Curse Of Love, a “lost” album originally recorded in 2006, while most of the band have been active in each other’s recent solo projects – James Skelly’s backing band The Intenders featured most of The Coral at some point, as has The Serpent Power (a project led by drummer Ian Skelly and Molloy).

Distance Inbetween is very much the hardest and heaviest thing that The Coral have ever put down on tape. The opening tracks set out their stall. “Connector” is a wonderfully hypnotic three-chord groove, based around a machine-like beat and some pitch-shifted Bollywood strings. “White Bird” is tremendous – an insistent, pulsating Motown-meets-Krautrock beat topped by spooky Mellotrons and wobbly guitars.

The band have always been good on imaginative vocal harmonies, orchestrated by bassist Paul Duffy, and this album is no exception. On “White Bird”, or the spooky, drumless folk-style song “She Runs The River”, or the one-chord boogie of “Million Eyes”, the close vocal harmonies initially sound like Crosby Stills & Nash or America, but start to become slightly sinister, using the kind of intervals you associate with Gregorian chants. And even the more meat-and-potatoes heavy boogie numbers – the bubblegum freakbeat of “Holy Revelation”, the 12-bar stomp of “Fear Machine – the drums sound fantastic – wild and thunderous yet also tight and hypnotic.

As you’d imagine, the band still hit some of those Liverpudlian touchstones. “Chasing The Tail Of A Dream” is a sped-up ringer for Pink Floyd’s “Set The Controls For The Heart Of The Sun”, based around the same pounding tom-tom gallop, played with beaters rather than drumsticks. That Scouse love of baritone crooners is never far – the dreamy, piano-led title track is a ballad where James Skelly’s croon strays into Scott Walker territory; among the woozy organs and grungy guitars of “It’s You”, he’s a ringer for Jim Morrison. “Miss Fortune”, meanwhile, sounds like a potted history of Merseybeat – a Teardrop Explodes-ish motorik beat, a Bunnymen-like melody and a terrific backwards “Taxman” guitar solo from Molloy.

On paper, stripped back to its constituent elements, it sounds somewhat derivative, an exercise in retro box-ticking. But the garbled way in which The Coral piece these disparate elements together creates an odd, timeless and cosmic music, buzzing with energy, and very much their own.

Q&A
James Skelly
How much do you see yourself as part of any Liverpool sound?
Well, when we started we were definitely influenced by stuff like the Bunnymen and Shack. But we’re kinda halfway between Liverpool and Wales – you can pretty much see the Welsh coast from Hoylake. And a big part of us was just as influenced by Welsh bands like Gorky’s and Super Furry Animals.

Is analogue recording important to you?
We’re not fetishistic about it at all. When it’s a really busy recording with loads of layers of instruments, digital recording is way better. But, for this album, we really wanted that soggy drum sound you get on tape. Digital can be a bit dry, but we wanted the drums to really bleed and soak into everything else.

The harmonies are weirder than usual here…
Yeah, they sound quite complicated but often they’re much simpler than our usual harmonies – often we’re just singing the root note and maybe a fifth. It’s a bit medieval, innit? Like those medieval beards some of us have been trying out lately, ha ha. Actually, I had an album of Gregorian plainsong as a teenager. Maybe that’s rubbed off.

What influenced the change in direction?
Well, we were listening to stuff like Can and Hawkwind and Black Sabbath. But our influences are less about music, more about other stuff. Richard Yates’ books, particularly Revolutionary Road, Alan Moore comics, and this amazing American photographer called Gregory Crewdson, who does these really beautifully lit pictures of mundane streets. A lot of the lyrics are influenced by Mad Men – the way you’ve got something very straight on the surface that’s actually very dark. I love how someone like Ian Curtis is able to be both domestic and apocalyptic, all at once.
INTERVIEW: JOHN LEWIS