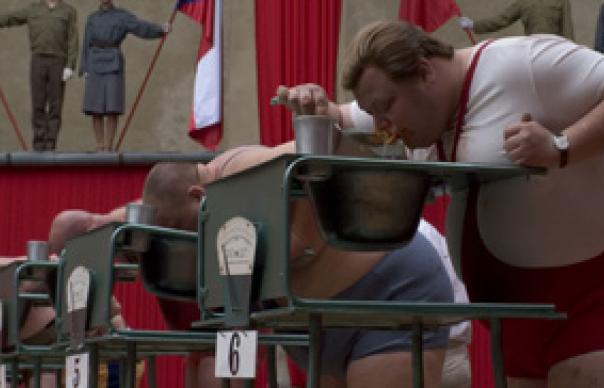 György Pálfi’s first feature, 2002’s acclaimed Hukkle, focused on one day in the life of a single Hungarian village. His follow-up has much grander ambitions, charting the fortunes of three generations of the same family and tracing a lurid, surreal history of post-war Hungary. There’s a sadistic lieutenant on the wintry home front in the Second World War, torturing his tormented private into demented fantasies of fiery ejaculations; his porcine son, a sexually frustrated competitive eater in the post-war communist era; and the grandson, a lonely but ambitious taxidermist and would-be conceptual artist in some alternative present.

It’s lurid, brutal, frequently intensely disgusting (sensitive souls should be prepared for some graphic pig fucking, extensive vomit and a breath-taking closing scene), but never less than beautifully shot and artfully composed. And if you can stomach the remorselessly ruthless wit, it’s often quite hilarious. Anatomising a country warped by dreams of power, corruption, consumption and lies, Taxidermia suggests that Pálfi is shaping up as the discreetly charming Hungarian lovechild of Pasolini and Bunuel.