…his orchestral soundtrack, for a film about a road 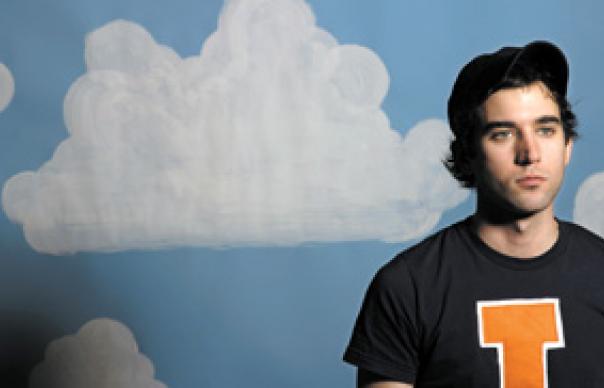 In a world where so many singer-songwriters are trammelled by their crushing lack of ambition and their lack of musical expertise, Sufjan Stevens sticks out like a sore thumb. He sings clever, beautiful, folk-tinged songs about serial killers, zombies and bird-spotting.

He’s written a string of rigorously researched concept albums: you’ve probably heard about Michigan and Illinois, the first two albums in his epic plan to celebrate each state of the Union, but there’s also been a song-cycle about the Chinese zodiac (Enjoy Your Rabbit; a collection of songs about the Bible (Seven Swans); and a separate EP of carols for five consecutive Christmases.

Now Stevens has turned his attention to the great American highway. Specifically, his new project is a film, an accompanying soundtrack and a theatrical performance that explores New York City’s Brooklyn-Queens Expressway, a mainly elevated section of Interstate 278 that connects southern Brooklyn (where Stevens lives) to Grand Central Parkway in Queens.

The work was commissioned by the Brooklyn Academy of Music(BAM) in 2007; Stevens and a 36-piece orchestra premiered it alongside a projection of his accompanying film. Fittingly – for a man who has been joined by a choir dressed in scout uniforms, or by cheerleaders who cartwheel onto the stage bearing orange pom-poms – the show was accompanied by five glamorous hula-hoop dancers. This package features the CD, a DVD of the film, a comic book and a 3D Viewmaster reel (you know, one of those quaint, olde-fashioned toys that you view through special Bakelite binoculars) containing stereoscopic images from the film.

BAM, who commissioned the work as part of a festival celebrating the borough, were apparently disappointed that Stevens chose not to use lyrics, instead addressing this expanse of tarmac and pre-stressed concrete through an orchestral score. Stevens, however, has long been lurching away from folksy Americana that BAM might have expected, dabbling with glitchy electronica, minimalism and the avant garde. Tellingly, around the release of his last album, Stevens informed us that he was “bored with the banjo, bored with the guitar”.

He studied the oboe and piano to a high level, and lists Stravinsky, Rachmaninoff and Grieg as his current classical interests, as well as the airy minimalism of Philip Glass, Steve Reich and Terry Riley. Some of these influences are evident on BQE, which often sounds like a series of particularly impressive classical pastiches. “I don’t think, musically, the BQE is that innovative or new,” he acknowledges. “There are references to Copland and Gershwin and Ravel and stuff. It’s not conscious, it’s just that I listen to a lot of that stuff. It’s part of my education.”

“Introductory Fanfare For The Hooper Heroes” and “Interlude I” have swaggering horns that suggest Aaron Copland; while the chugging woodwind and pizzicato strings of “Movement V” and “Interlude II” nod to the minimalism of Michael Nyman. “Movement II” starts with a gentle piano, brushed drums and cello; the trumpet fanfares slowly start to resemble Gil Evans’ lavish orchestrations for Miles Davis’ Sketches Of Spain.

Sometimes Stevens swerves through about five utterly distinct stylistic genres in one stretch of music. On tracks 6 and 7, a delicately unfolding Steve Reich-ish orchestral pattern, all dancing flutes and woodwind, suddenly mutates into a thumpy rave anthem. On “Movement VII” the piano riff from Debussy’s “Claire de Lune” becomes the basis for a strident orchestral motif, which slowly starts to swing, like an Elmer Bernstein soundtrack. Stevens, who plays piano and celeste throughout, also performs a Keith Jarrett-like solo vignette which closes the album.

In isolation from the film it accompanies, the score is beautiful, maddening, headache-inducing and slightly bonkers. Anyone expecting his familiar blend of Appalachian folksong and the Great American Songbook will be puzzled. And, as a piece of modern orchestral music, it’s not quite as satisfying as Run Rabbit Run (a classical reworking of Enjoy Your Rabbit, released this month in the US). But it’s a brave and hugely ambitious score that Stevens just about pulls off.

The Brooklyn Academy Of Music (BAM) commissioned me to write something about the borough for a festival. I felt that this expressway is such an iconic object that defines Brooklyn. BAM would have preferred lyrics, but I couldn’t distil the essence of this ugly/beautiful structure into words.

Well, the expressway is a symbol of movement, and motion, and I wanted the music to have a sense of perpetual motion. So a lot of it’s in 7/8, because when you cut a beat out of a measure, it can create a weird hiccup, which suggests that there’s no beginning and no end. And, although I initially wanted it to sound very sleek and cool, like Steve Reich, a lot of it’s very cartoonish. In a lot of Italian neighbourhoods in Brooklyn, people customise their car horns to play the theme from The Godfather, or the Dukes Of Hazzard. There’s a trumpet solo that simulates that!

Well, everything I’ve done in the past has been part of some conceptual package. Since then I’ve been trying to avoid that. I’m trying not to write about the US, for instance, and it’s taking me so long, because I feel like I’m starting over again! I’m also doing more stuff with electronics.