K2-sized riffs and (some) calm on troubled songwriter’s fifth 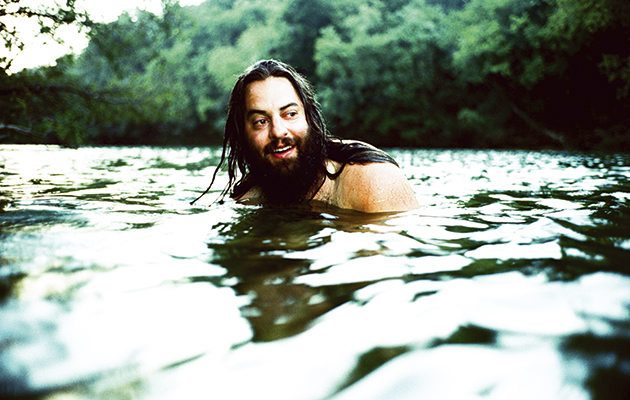 As Strand Of Oaks, he’s never been guilty of timidity or lack of vision, but two songs in particular on 2014’s Heal suggested that Tim Showalter’s epic rock expressionism had reached a giddy peak. One was “Wait For Love”, a towering fusion of Coldplay and The Afghan Whigs that was way more convincing than it had any right to be; the other was “Goshen 97”. A careering, grunge-pop flashback to its author’s Indiana hometown and teenage days spent “rotting in the basement”, it tapped Smashing Pumpkins and Dinosaur Jr (J Mascis was guest shredder) and was as ruthlessly self-exposing in its detail as it was unashamedly nostalgic.

On his fifth album, however, the Philadelphia-based singer, songwriter and musician has topped it with the similarly autobiographical “Radio Kids”. It’s an irresistibly surging, brazenly de trop pop anthem with a Cure-ish bent that mourns something from Showalter’s youth that is lost forever, while cutting clean to his creative core. “Remember how it felt to listen, fumble and press record,” he invites anyone whose musical awakening came via late-night megahertz trawling: “I got my headphones on, so my parents will never know.” But there’s a sting in the memory: “And now it’s just kids repeating; I guess I’m just as bad as them; I wanna get it back, I wanna get it back, I’ll never get it back, I know.”

“Radio Kids” is the momentarily blinding pop track around which the others settle into focus, but, like “Goshen 97”, it’s also a sonic red herring. Much of this record reflects Showalter’s kinship with electronics-favouring psych rockers like Jim James and The War On Drugs, plus his love of a specific strand of music from the late ’80s/early ’90s (much of it British), “when rock bands did Ecstasy and went to raves, but then went off and made amazing rock records,” as he explained to Uncut. “I’ve always loved that culmination of sounds that came from people doing a lot of drugs and making these wild, uninhibited records spawned from rave culture. It was basically before Cobain made everything so sad.”

All of which might suggest that Hard Love sets nostalgia and sentimentality against a backdrop of weird-beard self-indulgence. But Showalter and producer Nicolas Vernhes have struck two smart balances across the album: rockism versus experimentation and burning everything to hell versus finding some kind of peace. Since Heal centred on the (shared) fight to repair a badly damaged marriage, it’s not so surprising that the follow-up reflects on Showalter’s struggle to manage long-term alcohol dependence and his addiction to touring, while acknowledging life’s unavoidable messiness. One new song, “Taking Acid And Talking To My Brother”, addresses the mind-bending surreality of witnessing the near death of his younger sibling from sudden, massive cardiac failure.

But if Heal was about catharsis as a salve, then there’s nothing on Hard Love to suggest the battle is won, only that some lessons have been learned and clarity glimpsed. “Cry”, a spare and tender piano ballad finished with soft electronic exhalations and an outro of distorted barroom babble, concerns the overwhelming realisation of what inflicting deep hurt means, while the shifting psychedelic whorls and dubby incantations of “On The Hill” mark Showalter’s chemically triggered epiphany at Australia’s Boogie Festival in 2015. Along with the trippy ebb and flow with squirts of electronic noise that comprises “Salt Brothers” and hallucinatory eight-minute closer “Taking Acid…”, which suggests a wild outtake from A Northern Soul, they’re in sharp contrast to “Radio Kids”’ gleeful amped-up shoegazing, the roisterous, Clash-toned Americana of “Quit It”, where Showalter admits, “I been off my reason”, “Everything”’s doom-fuzz boogie and “Rest Of It”, a last hurrah-style throwaway with rampant soloing, that owes (too) much to Primal Scream’s “Rocks”.

An odd mix, maybe, but an entirely believable one. As Showalter sees it, “I think Heal really revelled in struggle, glorifying it and maybe even creating more chaos instead of moving beyond it. With Hard Love, I feel like I’ve grown to be more honest, more comfortable in my own skin and with the people in my life, who I am and music as a whole – and learned how to balance all of those things, without compromising any of them.”

Most crucial of Showalter’s checks here, perhaps, are his beloved stadium reach that stops just short of bombast, and his emotional directness that avoids explicit outpouring. It’s a neat trick to pull off.

Q&A
TIM SHOWALTER
What did you want to do with Hard Love?
I didn’t want to make this serious, revelatory, over-the-top, sad dude music. I needed to do something more primal and loose and truthful. The whole process from beginning to end – the studio experience, the people involved, the environment – it was all meant to be a party that I always wanted to be invited to.

What was your aim with “Cry”?
“Cry” is like the hangover you get after a night of bad decisions, or in this case, a few years’ worth. It’s about when you stop deceiving yourself and realise you need to own up to your actions. The outro started as a prank we pulled on my wife, Sue, that turned into something beautiful and added much-needed levity to such a heavy song.

What’s the background to “On The Hill”?
In my 34 years on this planet, this was the first time I truly embraced the Dionysian part of me: taking an obscene number of drugs at this otherworldly psych festival in the outback of Australia. It was the first time in my life when I felt completely liberated and also aware of what it means to be alive. In so many ways, I feel like that’s really what Hard Love is about.

“Quit It” suggests that your struggles continue.
In a way, “Quit It” is a proclamation that they are over. It’s me realising that I’ll always be kind of fucked up and I’ll always do fucked-up things to people. But either way, I just want to love them better and be better at this life.
INTERVIEW: SHARON O’CONNELL