Father-daughter dysfunction in Hollywood, from none other than Sofia Coppola. Intimate and very funny... 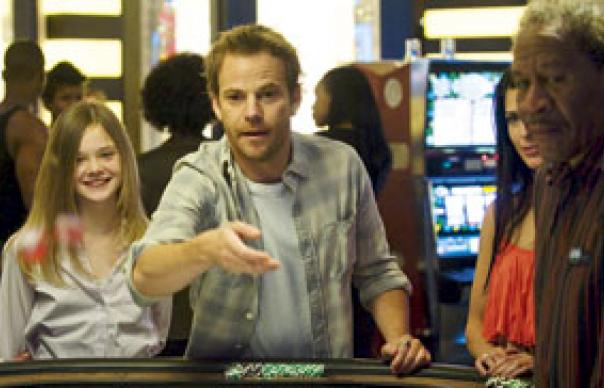 To her detractors, Sofia Coppola is still daddy’s girl – a self-conscious and affected filmmaker with a limited palette who can’t escape the shadow of her father, the great Francis Ford Coppola. He trades in epics. She is the family miniaturist. Her films, even her biggish budget period piece, Marie Antoinette, are tightly focused to the point of being claustrophobic.

Whether the setting is pre-revolutionary Versailles or the Chateau Marmont in LA (where much of Somewhere plays out), she likes gilded backdrops. Characters in her films seem curiously detached from their surroundings. Bill Murray’s jet-lagged American abroad in Lost In Translation is mirrored here by Stephen Dorff’s Johnny Marco, the pampered movie star supremely bored with his own celebrity lifestyle. He has injured his arm in a drunken escapade. His arm is in plaster and his emotions are under wraps, too.

Coppola’s challenge in Somewhere is to make us care about a protagonist who finds everything – sex, fame, money – so absolutely underwhelming. That she succeeds is testament to her idiosyncratic and utterly distinctive storytelling style. What is especially impressive about her new film is her readiness to hold shots and sequences for a mini-eternity. The scenes in which Johnny summons girls to his hotel room and watches them perform pole dances in front of him could easily seem sleazy in the extreme.

Instead, they become both humorous and disorienting. There is next-to-no dialogue. Dorff’s character is strangely respectful toward the dancers. He watches them with a detached curiosity, as if he is a spectator at some performance art event rather than a bored and lonely voyeur. Dorff brings an unlikely charm to a role that, if played by a less sympathetic actor, could have seemed entirely critical.

He’s a martyr to his profession. Coppola makes being a movie star seem like torture: Johnny is subjected to excruciating press conferences. He is convinced he is being tailed by paparazzi. For the sake of a role as an older man, he has to sit for hours having cream smeared on his face and body by make-up artists.

Somewhere also stands as a companion piece to Noah Baumbach’s Greenberg. Both films are set in contemporary LA. Both are shot by Harris Savides in a way that emphasises just what an impersonal place this is. This is not the LA of countless detective movies and film noirs. Nor is it the city on the brink of catastrophe (prey to earthquakes, riots and water shortages) shown in some films. Nor is it the city we know from satirical pictures about Hollywood from The Bad And The Beautiful to Robert Altman’s The Player. Instead, Coppola portrays a place where the characters spend an inordinate amount of time in cars or in hotel rooms and always seem to be in transit. It’s a city that seems inhabited exclusively by the young.

Like Ben Stiller’s character in Greenberg, Dorff’s Johnny Marco is lonely and struggling to make sense of his life. Thankfully, Johnny isn’t quite as obnoxious. He is successful. Even if his success bores him, at least he isn’t embittered. The pivotal moment in Somewhere comes early on, when Johnny’s ex-wife blithely tells him that she is going out of town and that he will have to look after his 11-year-old daughter Cleo (Elle Fanning). From Chaplin’s The Kid to Paper Moon, there have been countless Hollywood films about dysfunctional adults thrown together with children in unlikely circumstances. Invariably, the child turns out to be more mature and pragmatic than the adult looking after him or her. Many of these films have been very mawkish indeed. That’s not a problem here. Coppola’s quizzical, detached style ensures that excessive sentimentality is kept at bay. In its own slow-burning way, the film is also very funny.

Part of the humour comes from seeing the precocious child thrown into her father’s world. In one scene, apparently based on Coppola’s own childhood memories of being taken to casinos while on shoots with her father, we see Cleo at the gaming tables with Johnny. There is a wonderfully bizarre interlude in which Johnny takes Cleo to Italy. She watches in bemusement as he appears on a garish, Berlusconi-style TV show.

In terms of theme and story, Coppola doesn’t break much new ground with Somewhere. As critics haven’t wasted any time in mentioning since the film won the Golden Lion in Venice in September, this is yet another film about a man and a woman of different generations connecting in a hotel. However, few of these critics complained when the late Eric Rohmer made film after film about the complicated love lives of the young French or when Woody Allen returned again and again to plough the same Manhattan furrow. It is hardly a surprise that filmmakers continue to explore the same themes in their work.

Coppola is not a prolific filmmaker. Since her debut feature, The Virgin Suicides (1998), she has only made a further three films: Lost In Translation (2003), Marie Antoinette (2006) and now Somewhere. Even so, her style is instantly recognisable. Her films are characterised by their coolness and detachment, and can seem dauntingly inaccessible. Her scripts are very pared down indeed. Her work is closer to that of Chris Marker or Antonioni than it is to that of Judd Apatow. Audiences can feel that she simply doesn’t want to let them in. Somewhere isn’t glib or easygoing.

Audiences looking for cheery, upbeat comedy are likely to be nonplussed by the pacing and sheer inscrutability of the movie, with its many scenes of Dorff impassively watching the world go by or driving around and around in his black sportscar. Nonetheless, Somewhere is ultimately rewarding. The satirical sideswipes at the celebrity-obsessed media are well observed and often funny. The film has an emotional charge, too. The kid (excellently played by Fanning) helps jolt her father out of his emotional apathy. Slowly, he begins to accept his responsibilities and to realise just how superficial his lifestyle has been. It’s a familiar trajectory but Coppola tells her story deftly enough to make us care.
Geoffrey Macnab