Seasick Steve – Man From Another Time 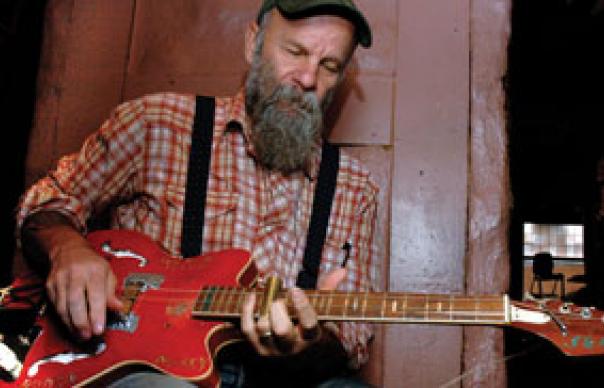 It’s weirdly heartening to discover that even grey-bearded sixtysomething former hobos turned late-flowering blues superstars can suffer existential insecurity. On the title track of Seasick Steve’s fourth solo album, he wonders aloud what the heck he’s doing, and why anybody else is paying attention as he does it. “Anyway,” he mutters, in that gentle growl which has become as much a fixture of the British summer festival circuit as unseasonal downpours, “I don’t know why you wanna listen what I got to say at all… Don’t you got nothing better to do?”

A fair question, to which a great many would clearly respond with an ardent, adamant “no”. Seasick Steve’s 2008 breakthrough, I Started Out With Nothin’ And I Still Got Most Of It Left, was a palpable Top 10 hit, staffed by guest stars (Nick Cave, KT Tunstall, Ruby Turner, Warren Ellis) and garlanded with critical accolades. His unusual autobiography was ubiquitously recycled in lurid shades of purple, though with rather greater emphasis on his years as a boxcar-jumping indigent than on his more recent toilings as a studio engineer.

Now that Steve has established his myth – though it seems less a case of Emperor’s New Clothes than Tramp’s Old Overalls – it seems reasonable to consider these things. Is Seasick Steve the real deal – whatever that means – or has he merely cunningly deployed his picturesque, picaresque backstory as distraction from the possibility that his gruff, rugged blues is, on its own merits, not obviously superior to the fare available from any number of dive bar stages and buskers’ pitches?

On the erratic strength of Man From Another Time, it’s hard to say. A couple of moments are arrestingly wretched. “Big Green And Yeller”, a Tim Hardin-esque talking blues love song to a John Deere tractor, is either mawkish or clumsily self-parodic. Opening track “Diddly Bo” (essentially a set of instructions for replicating one of Steve’s distinctive home-made instruments) and closing cut “Seasick Boogie” are wan, grating whimsy: you would not live long on the difference between either tune and “Tie Me Kangaroo Down, Sport”.

The album is a much more ruthlessly pared affair than its predecessor. Steve plays all the instruments, aside from drums, and records on studio equipment of comparably venerable vintage to Steve himself. This fundamentalist approach inevitably places a huge burden on the singing and songwriting. When these rise to the challenge, it’s wondrous. The prisoner’s lament “That’s All” coughs and wheezes through aptly tense, claustrophobic verses before erupting into a riotous, unbound chorus: Steve/’s finest few minutes to date. “My Home (Blue Eyes)”, presumably an ode to the joy of returning home to his wife of many years, is an affectingly heartfelt echo of John Hartford’s “Gentle On My Mind”.

Taken as a whole, unfortunately, Steve blunders in maintaining fidelity to the lo-fi approach at the expense of what might have best suited some of the cuts. “Banjo Song” features Steve’s voice at its weatherbeaten best, but suffers by the insistence on reducing the song to the title – there are reasons why the banjo is rarely featured as a solo instrument, and this sounds like a demo awaiting further work.

The gently rueful railway stowaway’s reverie “Just Because I Can (CSX)” sounds similarly unfinished – what should have been a vivid evocation of a goods carriage rattling across the American prairie is a ponderous plod more reminiscent of a First Capital Connect train parked interminably amid sheepfields somewhere near Bedford.

Seasick Steve sets his stall out with the title: he’s an old man, determined to have little truck with the new-fangled. He can plausibly claim, therefore, that it does what it says on the tin (a phrase which sounds like a Seasick Steve title in waiting). He should consider, however – and so should his audience – that antiquity and authenticity are not always necessarily the same thing.

I didn’t really want all those people on the other one, either. I picked those girl singers from Mississippi [Gale Mayes and Kim Fleming] but everyone else was kinda stuck on there by the record company. This time I didn’t even tell them where I was recording it.

I always do that. I’m not very good at writing just for fun. Normally, I pick up a guitar, play a few things, think I like the way something sounds, and I remember something. If that goes past three or four words, I’ll go with it.

Well, I really am. I’m not trying to be modest, but three years ago, the odds against me doing any good would have seemed about four billion to one. And like I say in the song, I do feel lost in the new world. The only modern thing I want is a mobile phone – I’ve been sick a few times, so my wife won’t let me travel without one.