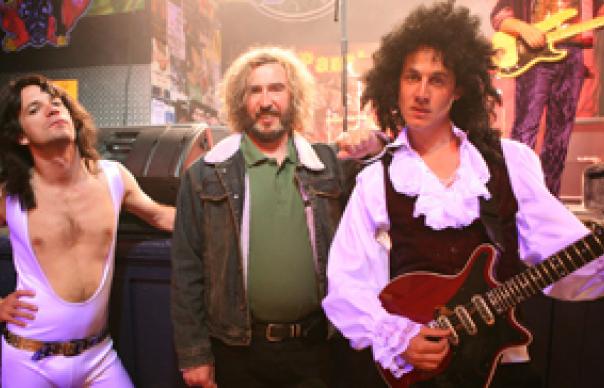 Though Alan Partridge will inevitably be the first line of Steve Coogan’s obituaries, Tommy Saxondale is a more subtle creation. A middle-aged, former heavy metal roadie now running a pest control business and enduring an ongoing mid-life crisis in Stevenage, Saxondale shares with Partridge a failure to fully accept the fact that his glory days are over. But, crucially, he deals with the diminishment of his dreams with a certain wistful warmth, as opposed to Partridge’s vindictive bitterness, which makes him a much more plausible character. We are implicitly instructed to laugh at Partridge. We are invited to laugh with Saxondale. The crucial, humanising – at moments, genuinely heartbreaking – difference is that Saxondale knows, at bottom, that he’s ridiculous.

That it’s possible to end up contemplating a sitcom character as something like a real human being is testament to both Steve Coogan’s fathomless talents as a character actor – something about which it would be a shame to become complacent – and consistently sensational writing (credited to Coogan and Neil MacLennan). This second season doesn’t feature a duff episode, but the finest are extraordinarily good. The opening episode, where Saxondale reunites with a former colleague – played by Simon Greenall, previously best known as Partridge’s Geordie amanuensis Michael – who now runs a new media company, is exquisitely excruciating. The gulf between their material successes sees Saxondale lurching agonisingly between self-aggrandisement and self-loathing. The dynamic persists through the rest of the series, as Saxondale continually struggles to adjust to a world in which everyone but him has, for better and for worse, aged three decades since the mid-70s. In the third episode, when embodiments of his beloved rock’n’roll attitude – anarchist students – move into his street, Saxondale’s subsidence into suburban intolerance is brilliantly rendered, at once melancholy and sympathetic.

The real highlights, as ever, are Saxondale’s tetchy interactions with the fellow members of his anger management self-help group. Who, ironically and inevitably, vex him far worse than any of the problems he’s seeking their counsel about.