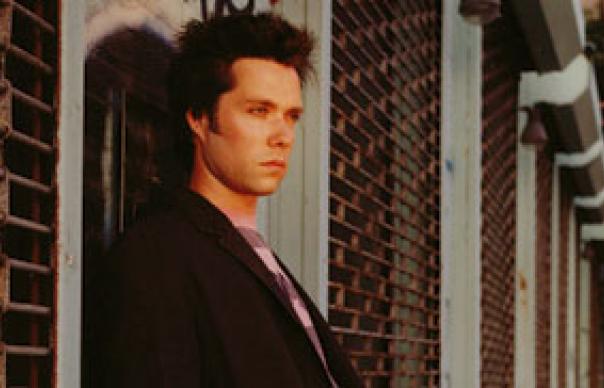 Late last year, Rufus Wainwright was a guest on Tom Robinson’s BBC6 radio show, answering questions about music and celebrity while pointedly avoiding allusion to his host’s former incarnation as the author of “Glad To Be Gay”. At the same time, Robinson – The Boy Who Should Have Been Loudon IV, remember – managed to be splendidly catty about Dame David Bowie, heavily implying that the sometime “bisexual” had felt threatened by the younger, flamingly out-there singer.

Tetchy queen that Rufus can be, how great to have a truly gay, unapologetically effeminate Star at last: no sly closet clues required for this diva.

But he’s much more than that. Rufus Wainwright, spawn of Loudon and (perhaps more importantly) Kate McGarrigle, has ten times the talent of admirer Elton John – or even of a Jobriath. This torch-song troubadour, trading in elegant melancholia, is one of the only great singer-songwriters working in pop music today. With that effortless tenor – bel canto with a vital edge of petulance – he’s Thom Yorke reborn on the stage of La Scala.

In this facile pop-idol age when actual talent counts for so little, Rufus’ extravagant gifts should be clung to like life rafts. Part-throwback to a golden era of post-folk-boom auteurs – of which his parents were a core part – he has veteran nurturer Lenny Waronker to thank for shepherding him through three stunning albums to get to this latest one. Many an A&R department would have gone cold on him, reneging on their duty to let talent flower at its own right pace.

When Wainwright came out with his self-titled 1998 debut, it was instantly clear that he had craft and schooled sophistication in spades. Here was a beautiful voice singing songs with artful arrangements, aided by the likes of Jon Brion and the venerable Van Dyke Parks. What wasn’t clear was how Rufus was going to get on the radio, a dilemma that 2001’s Poses partially solved by dispensing with the palm-court Parks factor and replacing with it with bluesy guitars, Propellerheads collaborations and the like.

Reassuringly, Want One (2003) revealed the sheer spectrum of his musical palette. Rufus’ talent hadn’t contracted in pursuit of the commercial rewards his narcissism demanded. He’d stayed faithful to his swooning muse, to a place where Radiohead met Mahler. Here was bold pop (“I Don’t Know What It Is”), pouty self-pity (“Pretty Things”), delicious pathos (“Vibrate”) and searing intensity (“Go Or Go Ahead”), all bathed in luscious orch-pop soundscapes. It confirmed once and for all that Wainwright was more than a mannerist: that a genuine ache, a yearning sorrow, lay in his ravaged heart.

Want Two is more, and even better, of the same – one of the dead-cert Albums of The Year. Echoing the cover of One, Two gives us the other side of Rufus’ androgynous split-self: an armoured knight for Want One, on Two he’s a bereft and possibly ravaged damsel, laid out on a bed of straw. On “The Art Teacher”, recorded live in Montreal, Rufus sings in the guise of a Desperate Housewife – wearing a “uniformish pantsuit sort of thing” – harking back to a schoolgirl crush on the man who led her around the Metropolitan Museum looking at Rubens and Rembrandt. On the baroque “Little Sister”, with its ornate ballroom string arrangement, he dresses up memories of early musical education with sibling Martha and asks her to “remember that your brother is a boy”.

It’s an album brimming over with beauty. With its scraped-viola intro and impassioned Arabic feel, “Agnus Dei” serves as a sort of overture, Rufus soaring like a debauched monk over swelling strings and rippling pianos. Single “The One You Love” sets off like vintage Squeeze before flowing into a declaration of devotion as glisteningly pretty as “Grey Gardens” or “I Don’t Know What It Is”. Wouldn’t it be a treat to see Rufus on Top Of The Pops?

The keynote feel of Want Two, though, is of what the great James Wood calls “measured lament”: the sound of Wainwright at the piano, “tired of waiting in restaurants/Reading the critics and comics alone” (“Peach Trees”), “bruising from you” (“This Love Affair”), or simply “waiting… for the present to pass” (“Waiting for a Dream”). If Want One was all seedy Gotham glam, Want Two is the aftermath of that album’s restless wanderlust.

Most moving of all is “Memphis Skyline”, an elegy for another beautiful boy blessed with more than mere attitude and exhibitionism. “Always hated him for the way he looked/in the gaslight of the morning,” Rufus croons of Jeff Buckley, to whom this is a sweetly homoerotic tribute: “So kiss me, my darling, stay with me till morning…”

If I have any quibbles it’s that Wainwright’s swishiness is sometimes too obviously a mask. Will the real Rufus Wainwright ever step out from behind it and give us his feelings pure and unadorned? That might be when he becomes a truly great artist.

And can Rufus break through? Supporting Keane on their upcoming Euro tour is something of a gamble. I’m not saying he’ll be bottled offstage, but the whole point about Keane is that they provide ersatz Jeff Buckley emotion for students who wouldn’t know real beauty or feeling if it came in Alcopop bottles. Having said that, the live Fillmore DVD that comes free with Want Two – with its version of (Jeff Buckley’s version of) Leonard Cohen’s “Hallelujah” – makes it plain: Wainwright could hold his own with any headliner on earth.