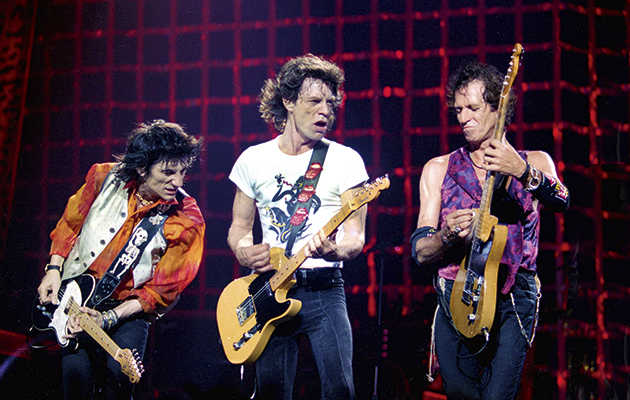 At the fag-end of world-straddling Voodoo Lounge tour – at that point, the highest-grossing in history – the Rolling Stones decided that their second project for Virgin would riff a little on the ‘90s vogue to go ‘unplugged’.

When Stripped (working title: But Naked) arrived with a wolfish grin in November 1995, it was a mix of pared-back studio sessions and cuts from three ‘intimate’ summer shows at Amsterdam’s Paradiso, L’Olympia Paris and Brixton Academy. These bonus dates had been jemmied into the Voodoo Lounge itinerary, at venues several thousand-seats down from the enormodomes the Stones usually called home. The setlists were a surprise too, focusing on dimmer-lit corners of the catalogue. In ’95, less, it seems, could be more.

Totally Stripped is available in multiple formats, but the centrepiece of this 21st anniversary reissue is its revised 90-min doc. You follow them through summer, via previously unreleased archive footage, including sessions in Tokyo, full-song highlights from each of the secret gigs, punctuated by shaky hand-cam musings and backstage browsing. To add context, there are a series of properly lit, on-point band interviews, and some fawning vox pops with the fresh-faced Europeans who were lucky enough to get wristbands.

The band themselves, including the brilliant keyboardist Chuck Leavell, producer/cheerleader Don Was and much-missed saxophonist Bobby Keys, and are on message throughout: stadiums are great, but nothing beats the intimacy of an old-school show. “We’re a club band…” hisses Keith. “We just got bigger gigs”.

Mick Jagger, so lean, so intense, is initially less convinced about this exercise in nostalgia: “It’s like being on some terrible Rolling Stones gameshow, where you have to perform ancient songs without the chance to refer back”. He’s gets busted too – you can see him reading off a cheat-sheet during sessions for “The Spider And The Fly”. By Brixton, he’s revelling in the caustic cabaret of “Far Away Eyes”.

The gigs are terrific: intense, powerful hits to the body, with some perilous interplay from Keith and Ron Wood. Visually, you can see how these shows are the sourcebook for Scorsese’s theatrical charabanc Shine A Light, and much of the best insights revolve around the reduced stagecraft required at smaller venues.(Mick: “I have to tone down everything”. Keith: “We get to keep God out of the band.”). On stage, Jagger eats the audience. Off it, he’s the band’s clear-eyed chronicler: it’s Mick who gleefully explains the choice of L’Olympia: the last time they’d played there was in ‘64, as a matinee warm up for Petula Clark.

Don’t expect fly-on-wall intensity. There’s a lot of backslapping bonhomie, typified by a pre-show knees up of “Tumbling Dice” ‘round Leavell’s Old Joanna (well, A Yamaha Clavinova). The closest we get to tension is when Keith rolls in late for the Brixton soundcheck (limo plate: 906 HRH). And when Jack Nicholson casually drops by for a chat, schoolmistressy Jerry Hall shoos the camera out of Mick’s dressing room.

Here’s where today’s Stones were rebaptised – the oldest guys in the room, helming the heritage juggernaut, more comfortable exploring the band history than having the next hit. Totally Stripped is a musical postcard a time when everybody smokes, no-one has a smartphone, and the Stones, inevitably, still got you rocking.

EXTRAS: Available in one, two or five-disc deluxe edition with audio, 60-page book and complete sets from the three gigs.