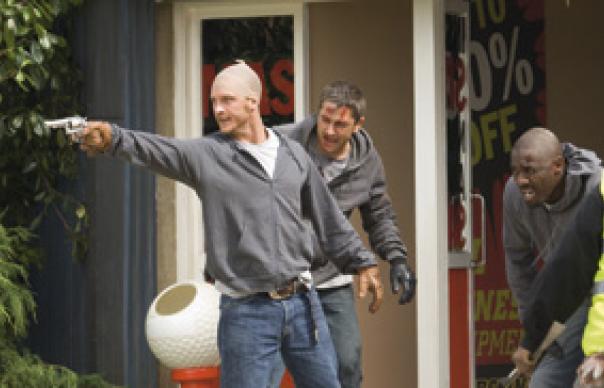 
After Vinnie Jones, Brad Pitt, his missus and Kabbalah, Russian gangsters are the fifth novelty to be folded into Guy Ritchie‘s skewed crime universe. Returning to the cartoon-caper style of Lock, Stock… and Snatch after the absurdly ponderous Revolver, RocknRolla is another shaggy-dog tale of dodgy deals and colourful criminals but this time with a terrific cast of established and upcoming Brit talent who give Ritchie’s sometimes naive and sketchy script a surprising power.

As with his first two films, there are several concurrent stories elbowing each other to get into frame, chiefly concerning the arrival of Moscow oligarch Uri (Czech star Karel Rodin) and his plans to buy up a stretch of London to plant his new football stadium. This, though, is not the main attraction, with 300’s Gerard Butler and The Wire’s Idris Elba as One-Two and Mumbles, two charismatic crooks who intercept Uri’s cash payment, Tom Wilkinson as Lenny Cole, the poker-faced crime boss this leaves in the lurch and, best of all, Control/Dead Man’s Shoes’ Toby Kebbell as Lenny’s crack-addicted son, the cynical RocknRolla of the title. After a dark, promising start, it ends far too light-heartedly, but Ritchie’s film is a turn-up, a brisk, well-played romp nevertheless.