Robbie Basho – The Voice Of The Eagle 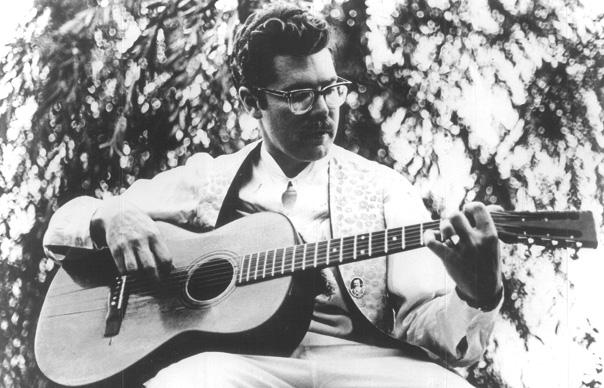 While he was one of the first “American Primitive” guitar players – his music was released by John Fahey on Takoma; he was a University of Maryland contemporary of Max Ochs – the work of Robbie Basho (1940-1986) was never primitive, and seldom exclusively American. A singer and 12-string player, his work spanned east and west, from folk in the 1960s to new age in the 1980s, ultimately as much of the air as the soil. “I have a love for China, Japan,” he told one radio interviewer, “the Islamic thing, the American Indian …”

To confine himself was just not Basho’s way. His voice (which Fahey called “strange and compelling”) was an operatic bass rising to a high yodel. This, together with his tremulous whistling, and his guitar playing (filled with fluid gestures and entrancing repetitions) enact in his songs the free-roaming journey across musical cultures made by his records. “If you can crack one bag,” he said, “you can crack them all.”

True enough, 1972’s Voice Of The Eagle, (recorded for Vanguard and now reissued by ACE) is steeped in the sacred chants and anthropomorphic tales of the Native American, but refuses to remain there, aiming always for transcendence. There are many birds in these songs, and they are all flying towards the sun.

The title track establishes Basho’s panorama. In his original sleevenotes, he called it a “Hopi raga”- though it includes more even than that. Beginning with his striking chanted vocal, the piece goes on to broach the traditional ballad “Man Of Constant Sorrow”, and explore his own harmonic-laced guitar playing, all accompanied by the mdrangam drums of Ramnad V Raghavan.

Both chanting and Raghavan appear again on “Omaha Tribal Prayer”, while the guitar playing runs from concise and understated (“Roses And Gold”; “Joseph”) all the way to wildly discursive (the ten minute “Blue Corn Serenade”).

It’s all great stuff, but it’s the singing that captures the truly unique aim of Voice Of The Eagle. As Basho sings on “Joseph”, that aim is to: “keep on climbing towards the dove, with soft unbroken wings…”
John Robinson