Robert De Niro, Al Pacino; together for the first time since Heat 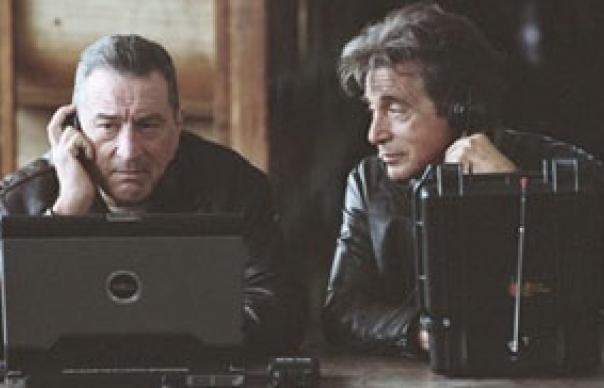 Reviews from the States have been ostentatiously harsh: this is a sinewy, enjoyable thriller – no more, no less. It’d be all but impossible for the first full pairing of the peerlessly iconic Robert De Niroand Al Pacino to live up to best expectations. Bar six minutes onscreen together thirteen years ago in Michael Mann’s Heat, and a shared credit in The Godfather 2, they’ve never co-driven a movie. Here, they’re partners, in every sense: as New York cops, in what’s a decent, intricate but less than transcendent genre piece (written by Russell “Inside Man“ Gewirtz), and as actors, buddying up, taking equal screen time, neither one the clear Alpha Male.

Does the dream team produce its own heat? Well, De Niro has said he wished they’d done a movie together properly years ago, and one has to agree. Both are fine, and there are some scenes of sparky chemistry. But De Niro’s career has long since plateaued, his mystique sacrificed, and he’s simply solid, while Pacino rather gratuitously inserts some of his trademark grins, nudges and winks when he feels things are lagging. The thing is, you’re glad he does. And while there’s no excess of magic here, the film undeniably draws an extra frisson from the fact that we’re witnessing the two titans playing off each other.

Righteous Kill would be nothing special if it starred, say, Clive Owen and Josh Hartnett, but it is better than many feared. Our two long-in-the-tooth detectives – close to retirement, inevitably – are tracking a serial killer, who we’ve already been led to believe is actually De Niro, in vigilante mode, washing the scum off the streets. Or is it? Drug dealer Spider (a rubbish Jackson, aka 50 Cent) may hold a clue, as may De Niro’s cop girlfriend Carla Gugino. Junior cops Donnie Wahlberg and John Leguizamo (both overtly excited to be sharing scenes with the big dogs) muck in. The trail is complex, relying on the screenwriter’s sleight of hand, the mediocre director’s insistence on too-quick MTV-style edits, and of course the demeanour of Bob and Al to keep us guessing.
And they do. Tossing in moments of humour and rage and questions of do-I-trust-this-guy-or-not (something they both, still, do very well), Righteous Kill – while no classic – is more than all right.