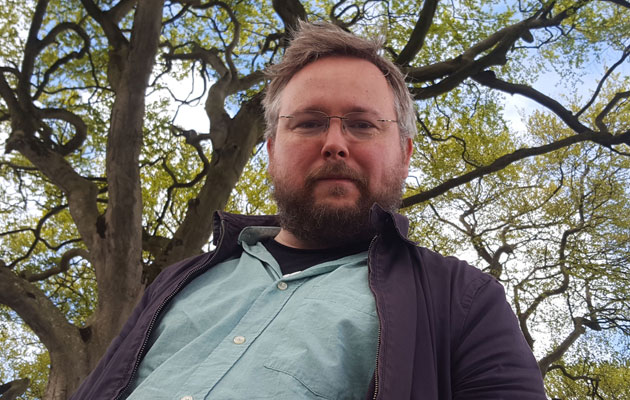 Last time we came face to face with Richard Dawson, he was adrift in ancient Britain. The Newcastle singer-songwriter’s fifth album, Peasant, was set in Bryneich, a Middle Ages kingdom that stretched between Scotland and the River Tyne somewhere around the 6th century AD. These were faraway times, barely documented in the written word, so on the surface his new album 2020 – which is very much a record of the here and now – should feel like a world apart. Yet there’s something about the way that Dawson writes – in a vivid first-person style, full of grit and vigour – that gives his music a consistent thread, and roots it in something very human.

2020 is, without a doubt, Dawson’s most direct album to date. Entirely self-played but ambitious in its palette and bold in its arrangements, it finds him adding a new lucidity and sense of melody to his knotty and raucous take on folk music. Next to Peasant – an album that, in Dawson’s words, “sounds like it’s covered in dry mud and twig scratches” – 2020 is positively hi-fi, its spry fingerpicking and tremulous choruses presented in gleaming clarity, guitars mostly electrified and paired up with synths and chunky drums, both real and electronic.

Its 10 songs are set against backdrops of mundane modernity – town centres, provincial football pitches, flooded pubs, Amazon warehouses – and focus their gaze on a cast of characters who are down on their luck or feel alienated by the world that surrounds them. On the opening “Civil Servant”, we follow the perspective of a staff member in a job centre, dealing daily with the hopeless and the desperate, and gradually feeling his humanity slipping away. “In my bed I can hear the strangled voices/Of all the people I failed, I failed, I failed, I failed,” he chants, as guitar and drums lock into a grim, arabesque churn. Not for the first time on 2020, you’re reminded of an observation by the philosopher Jean-Paul Sartre: that hell is other people.

The mess of human relationships is grist to Dawson’s mill, and his writing here has seldom been better. On “Heart Emoji”, a man learns of his lover’s presumed infidelity through the glimpse of a 3am text message. “Two Halves” is the tale of a child footballer and his competitive dad that captures the pair’s relationship in tragicomic style (“Stop fannying around!/Keep it nice and simple/You’re not Lionel Messi/Just pass the bloody ball”).

At times, 2020 feels almost unbearably sad. “Fresher’s Ball” starts with a father dropping off his daughter at university, and feeling a gulf of loneliness open up. But Dawson’s music comes from a place of compassion, which manifests in occasional chinks of light. On “The Queen’s Head”, a landlord and his family dash back home after receiving a call to say their pub has been flooded. They arrive to find that their neighbours – whom, Dawson points out, they have never met – are mucking in with buckets. There is the sense that community persists, even as the modern world does its best to extinguish it.

If 2020 finds Dawson approaching accessibility, there is an essential weirdness to his music that will not be entirely dislodged. “Black Triangle” is a turbulent mix of barbarian metal, billowing sci-fi keyboards and pseudo-medieval modes, and traces the story of two friends who, as young men, spot a UFO; the song has an allegorical feel, but at its heart, it’s as enigmatic as the floating prism of the title. The 10-minute “Fulfilment Centre”, meanwhile, adopts a fluttery jazz fusion reminiscent of Frank Zappa, one that more or less approximates the queasy disorientation of a shift at the zero-hours grindstone. Time spent with Dawson’s music tends to render its oddity strangely palatable, though. Take “Jogging”. On paper, it’s a six-and-a-half minute song about overcoming anxiety that revolves around the question: is the world full of hate, or am I just paranoid? Yet the anthemic chorusing and billowing synthesiser feel designed to keep dark thoughts at bay, and it culminates on a note of mildly comic triumph as the protagonist asks: would you like to sponsor him, because he’s running the London Marathon?

Tragedy and comedy, tall tales and home truths – 2020 takes all the raw stuff of life and lays it out like meat in a butcher’s window. It can be a dark listen – heavy with disappointment and anxiety, shot through with the pain of betrayal and constant reminders of man’s inhumanity to man. But Richard Dawson’s music is underpinned by a powerful sense of empathy – he’s rooting for us. And it’s hard not to conclude that 2020 is the record we need right now: a state-of-the-nation address for a nation in a bit of a state.