Portraits of the artists as young men, bolstered with b-sides, Beeb sessions, promos and live footage. 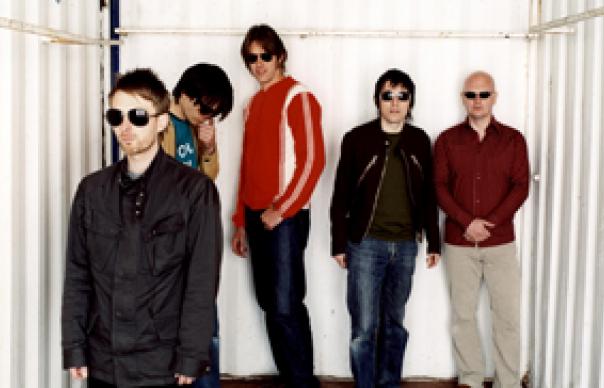 It certainly doesn’t feel like 12 years since OK Computer, an indication of the record’s continuing power and resonance, as well as, perhaps, the inability of Radiohead’s successors to move the game forward significantly. Either way, the reissue of such a ubiquitous album hardly seems crucial right now.

That is, unless you work for EMI. So far, their treatment of Radiohead’s back catalogue has resembled a jilted lover flogging their ex’s belongings on eBay, dripping bittersweet tears onto the address labels. First there was the hurriedly-assembled seven-album boxset and ridiculous USB stick. Then came the less-than-essential Best Of. More recently, EMI announced plans to re-release every Radiohead single on 12” vinyl, an exercise that will surely only serve to point up the ugliness of most of the original artwork.

However, it’s harder to condemn EMI kingpin Guy Hands and company for this latest batch of reissues. The label have only done what any sane copyright holder would do and whacked out the early albums with bonus discs corralling all the b-sides, plus selected BBC Radio sessions. There are no outtakes (so that studio version of “True Love Waits” remains at large) but thankfully no superfluous remasters either.

The ‘Special’ DVD editions may test your loyalty, featuring nothing more than the promo videos, a smattering of BBC TV appearances and the previously released footage from Radiohead Live At The Astoria in 1994. Otherwise, these reissues have been logically and sympathetically compiled.

So to the music. 1993’s Pablo Honey isn’t as completely cack-handed as many would have you believe. It’s lumpy and uneven and often sounds like a band pulling in five different directions – but that last quality was, and occasionally remains, part of Radiohead’s appeal. “You” is blaring and overtly tricksy but, as an opener, it’s pretty ambitious – less grunge-lite, more college prog. Muse would later base an entire career on this kind of thing. “Creep”, however, still sounds like the runt of Radiohead’s litter: the over-bearing self-pity, those wheedling arpeggios… even Jonny’s clink-clunk guitar spasms signposting the chorus now feel horribly mannered. If “Creep” was released today, we’d call it emo. Radiohead would go on to release worse singles – the clunky music biz satires “Anyone Can Play Guitar” and “Pop Is Dead” are best swerved – but there are also plenty of better songs on Pablo Honey, even if they don’t seek attention so cravenly.

“Vegetable”, for example, turns out to be a terrific, gnashing, power-pop smoulderer, while future obsessions with cultural alienation, suicide and TV as the opiate of the masses are all there in underrated debut single “Prove Yourself”: “Can’t afford to breathe in this town/ Nowhere to sit without a gun in my hand/ Hooked back up to the cathode ray/ I’m better off dead”. “Lurgee” may not be similarly indicative of any future direction but its diaphanous layers of Galaxie 500 guitar are enchanting all the same.

Pablo Honey’s contemporaneous extra tracks are largely rubbish, save for the urgent, original version of “Prove Yourself” and a dreamy Verve-like number called “Coke Babies”. Serious Radiohead twitchers may nevertheless appreciate a session version of old On A Friday staple “Nothing Touches Me”.

With hindsight, the ’90s music press analysis of a sudden epiphany occurring between Pablo Honey and The Bends seems like overstating the case. Many of the musical and lyrical themes are similar but The Bends is simply more focused, better written, less anxious and allows Thom Yorke’s voice more room.

“My Iron Lung” still cleaves to that quiet-loud-quiet dynamic, but the quiet bits are menacingly serene, the loud bits genuinely delirious. “High And Dry”, “Fake Plastic Trees” and “Bullet Proof… ” witness the flourishing of a deft, restrained songwriting talent, while “Planet Telex” seamlessly introduces keyboards along with a sense of conflicted futurism that would prove the band’s rudder for a decade.

Whether or not you consider The Bends to be Radiohead’s first masterpiece probably hinges on whether you think “Street Spirit (Fade Out)” is an unbearably poignant meditation on death and the devil or a bleak cod-baroque dirge. Those in the latter camp are forewarned that there are two more versions of it on the second disc, but luckily The Bends’ b-sides overall are far more rewarding than Pablo Honey’s. They appreciably improve with time: forget anything from the “My Iron Lung” EP and skip straight to “Maquiladora”, a strident Smashing Pumpkins-style stadium rocker that was unlucky not to make the album.“How Can You Be Sure?” and “Talk Show Host” find Radiohead gaining in confidence, experimenting with rhythm and texture, sounding fluid, sultry even.

Which brings us to OK Computer, still so ever-present on the rock landscape. And no wonder: existential angst has never been realised with such heart-rending potency, via a collection of awesomely supple and substantial songs that haven’t worn or dated one iota. There hasn’t been a better album released in the intervening 12 years.

As before, the b-sides can be interpreted as portents of the future: claustrophobic affairs bathed in digital static, the band toying with programmed beats and dubby atmospherics. “A Reminder” and “Meeting In The Aisle” are particularly dreamy (nightmarish?) and do a better job of elongating the Radiohead template than trip hop remixes by Fila Brazilia and producer Nigel Godrich’s mates Zero 7. Even more conventional songs such as “Polyethylene” and “Lull” offer fresh angles. Weirdly, however, the live and session tracks chosen for inclusion here sound a little lethargic.

It’s a shame that EMI weren’t able to secure footage of the legendary 1997 Glastonbury performance, widely regarded as the moment Radiohead ascended to Olympus (even if, as the bootlegs suggest, you probably had to be there). Instead, OK Computer’s flimsy accompanying DVD offers three songs from a May ’97 Later… With Jools Holland appearance – all utterly stunning, but you’re left feeling shortchanged.
OK Computer was such a towering achievement that its influence on British music was to prove a little bit suffocating. It made audiences so wary of rock artifice that our album charts became clogged with pained, earnest posh boys. Few of the bands who formed or gained lift-off as a direct result of hearing OK Computer – Coldplay, Editors, Elbow, Muse et al – have come close to emulating its wracked majesty.

At least Radiohead themselves would do their best to ensure that their next move was pretty much inimitable.