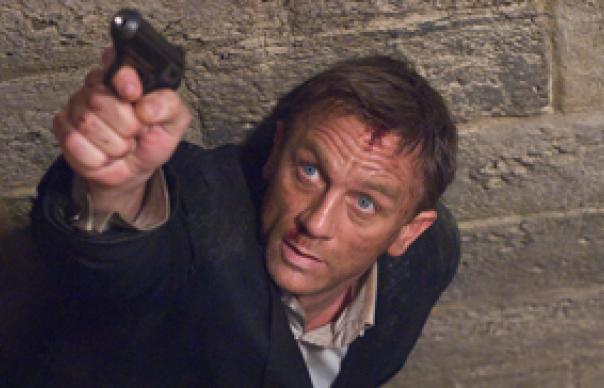 Cumbersome title aside, it would be churlish to underestimate the amount of goodwill directed towards what, for brevity’s sake, we’ll stick to calling Bond 22.

Certainly, its predecessor, Casino Royale, was the most successful Bond yet, a hefty bump on the balance sheets due, principally, to the arrival of a new 007 and the series’ widely praised new direction. Out went spaceships and henchmen with metal teeth, to be replaced by a more robust psychological investigation of what makes Bond, well, Bond. Not so much a reboot, then, as a complete bottom-up reinvention; itself a pretty daring undertaking in the old dogs/new tricks department.

So it is, we come to Poultice Of Solitude expecting plenty. To begin with, there’s the Jack White/Alicia Keys theme song, but more importantly we are promised a direct continuation of the events in Casino Royale, with Bond hunting the organisation he believes is accountable for the death of his girlfriend, Vesper Lynd. That title, in fact, refers to the small amount of comfort you might take from a situation where everything else has gone completely wrong; for Bond, it’s all about revenge.

It’s potentially terribly juicy stuff, and Daniel Craig, out of all the Bonds – with the possible exception of the classically trained Timothy Dalton – has the acting chops to pull it off. But the film is let down by a conspicuous lack of rounded characterization. 007 aside, there’s Camille (Kurylenko), who’s also out for revenge, against a South American General who killed her family. Both she and Bond are intriguingly described as “damaged goods”, but there’s very little further elaboration on that in the script. One speech Bond delivers on his philosophy of killing opens the door a crack, but it swiftly slams back shut again; it tantalizingly reopens again later amid suggested hints of Bond’s incipient alcoholism. Then, bang, it’s shut again.

There are other elements that are also given infuriatingly short shrift. One major arc follows the shifting post-colonial power games in South America being played largely between the British and Americans that recalls Graham Greene. In fact, at point one, Bond’s CIA friend Felix Leiter (Jeffrey Wright) looks perilously like he’s going to assume the role of one of Greene’s whiskey priests. But, sadly, that recedes into the background with all the grace of a SPECTRE assassin.

The problem seems to be in the pacing, which has a breathless urgency about it. At 1 hour 46 minutes, it’s the shortest Bond movie made, and certainly things rush past at a gallop, the filmmakers privileging action sequences at the expense of dialogue and – the supposed selling point of New Bond – insight. Car chase? Check. Boat chase? Check. Aeroplane chase? Check. Big set piece where a massive desert complex gets blown to pieces? Oh, yes.

Craig – sleek, muscular, cruel – seems to take delight when told “There is something horribly efficient about you.” Matthieu Amalric’s Dominic Greene – a businessman working for the Quantum organisation – has a certain oily arrogance. Meanwhile, Kurylenko rather gamely refuses to comply with traditional Bond girl requirements.

Marc Forster – an interesting enough choice for director, with movies like Monster’s Ball and Finding Neverland – adds some artful flourishes. One sequence, crosscutting between a performance of Tosca at the Bregenz Festival House in Austria and a shoot out in the building’s kitchens, may be Coppola-lite, but it’s refreshing to see in a movie like this. As is a striking use of black or white costumes in one night scene.

For all these welcome touches, and Craig’s steely Bond, it felt like a series of action set pieces in search of a plot and, more pressingly, the much-promised character development.