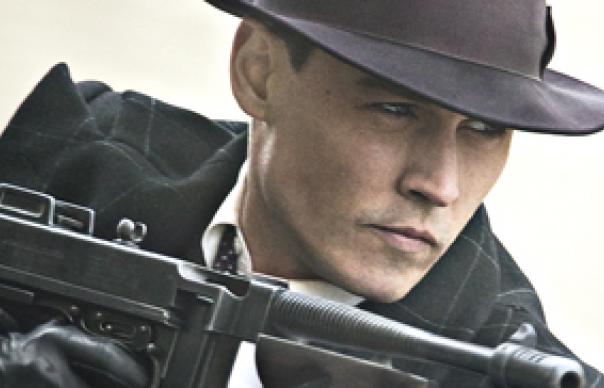 1933. Across a 13-month period, bank robber John Dillinger (Depp) becomes America’s Public Enemy No 1. Pursued by the police across the mid-West, Dillinger and his gang become unlikely national heroes. But it’s only a matter of time before the FBI – led by Melvin Purvis (Bale) – catch up with them…

You might wonder what thoughts were going through John Dillinger’s head as he settled back in his seat in Chicago’s Biograph Theater on July 22, 1934 to watch Manhattan Melodrama. A glossy gangster film, with Clark Gable as affable rogue Blackie Gallagher, Manhattan Melodrama admittedly barely reflected much that Dillinger might have recognized from his own life – which, by now, was mostly conducted on the run along remote Midwestern back roads or holed up in cheap flophouses. But the movies had effectively laid claim to John Dillinger. Edward G Robinson in Little Caesar, James Cagney in Public Enemy and Gable in Manhattan Melodrama were all, to some degree, riffs on Dillinger, by then America’s Public Enemy No 1.

Here, at the very end of his 13-month crime spree, he was one of the most prominent figures in the country, second only to President Roosevelt. A bank robber during the Great Depression, Dillinger was stealing from the institutions that had hurt everybody, and he was outsmarting the government that was incapable of helping anybody. During an era where the Old West was still close enough to touch, Dillinger – along with Machine Gun Kelly, Bonnie and Clyde, Baby Face Nelson, Pretty Boy Floyd and the Barkers – was a national icon, a folk hero whose antecedents stretched back to Jesse James and Billy the Kid.

Arguably, Blackie’s line in Manhattan Melodrama – “Die the way you live: all of a sudden. Living any other way doesn’t mean a thing” – offers the key to Michael Mann’s take on the Dillinger story. Mann’s Dillinger – played here with customary brilliance by Depp – exists entirely for the moment. “What do you want?” he’s asked. “Everything. Right now,” he replies. It’s a philosophy you would imagine the outlaws of the Old West subscribed to. Death being a very real and present danger, you might just as well live for immediate gratification, no thought for tomorrow at all. “You been living here long?” asks girlfriend Billie Frechette (Cotillard) when she first visits Dillinger’s place. “Yeah,” he says. “Since yesterday.”

But tomorrow is coming awfully fast. The 1930s are the birth of the modern age, and Dillinger is increasingly a man out of time. Bank robbery is being superseded by the gambling syndicates, their enterprises conducted discreetly via telephone in rooms above shops – a long way from the perilous, very public world of armed robbery. Meanwhile, J Edgar Hoover’s G-Men are ushering in a new kind of policing, with new and more efficient methods like phone-tapping. Hoover (Crudup; menacing and effete) sees the potential in Dillinger’s capture to launch his Bureau of Investigation.

He assigns Melvin Purvis (Bale, lips pursed throughout) to head up the hunt for Dillinger – but for all Purvis’ due diligence in his pursuit, his modern methods fail to bring Dillinger to justice. As Purvis explains to Hoover: “Our men are not up to the job.” It’s only when Purvis brings in a bunch of Texas and Oklahoma Rangers, old hands who understand Dillinger, that events begin to move inexorably towards Dillinger’s death on the steps on the Biograph Theater.

In fact, there are plenty of contemporary nuances in Mann’s film. Hoover has a strikingly prescient understanding of media manipulation. Indeed, you might find it hard not to sense something of the Dick Cheney about him as he dispenses sound bites to the press about “war on crime”, while covertly encouraging his men to extract information from suspects by any means necessary, including torture. Dillinger wears tinted sunglasses that look more than a little Lennon; when he introduces himself to Billie with “I like baseball, fast cars, good clothes and whiskey,” it sounds like the kind of superficial biographical data you find in a celebrity magazine.

Meanwhile, in one sequence, dated January 30, 1934, Dillinger is arrested and taken by airplane to Lake County Jail in Crown Point, Indiana to await trial. The footage of him met by a throng of photographers as he steps off the plane, then sped through the city in a police convoy, the streets lined with spectators, recalls a thousand similar well-documented journeys taken by rock stars, politicians and actors and casts Dillinger as an unlikely early celebrity of the modern age. He even hosts an impromptu press conference at the jail, posing for photos with prosecutor Robert Estill.

As you might expect from a Michael Mann film, there are a number of ferocious firefights, particularly one at Little Bohemia, a lodge in remote Wisconsin where the Dillinger gang are cornered by Purvis and his Rangers. The gang try and shoot their way out, Thompson submachine guns squaring off against rifles. It’s very different from that shoot out in Heat, which left half of downtown Los Angeles in rubble, but it’s no less jarring as shells tear chunks out of walls, furniture and cars. Mann, to my mind the greatest stylist in modern American cinema, shoots the film on high-definition digital, giving it a striking colour palette. This is a long way from the serene grey/blue wash of Heat, or the low-light urban desolation of Collateral. As Mann says over the page, he wanted to place the audience right there in the movie, and this crisp digital look affords Public Enemies an incredible sense of immediacy. Mann, too, has a strong eye for forensic detail that ramps up the vividness of the film.

Mann’s film, then, is arguably some distance from previous cinematic takes on the Dillinger story, particularly John Milius’ memorable version from 1973. For Milius, Warren Oates played Dillinger as a straight-ahead sociopath, but Depp offers us something different, chewier. Mann’s film opens on September 26, 1933, with Dillinger springing members of his future gang from Indiana State prison. You might ask, is Dillinger breaking his men out for reasons of comradeship, or is he more concerned with keeping close the people he knows he can rely on in a scrape? Certainly, as Purvis and the G-Men chip away at the gang, and Dillinger is forced to bring in new, ultimately unreliable recruits – including loose canon Baby Face Nelson (This Is England’s Stephen Graham) – you might suspect the answer is more pragmatic than philanthropic. There’s also plenty that’s contradictory about Dillinger: he lives for the moment, but he’s capable of investing plenty of time and thought into planning pretty elaborate bank robberies. Depp delivers all this with almost total inscrutability; it’s hard to know what he’s thinking, or where he’s going next. Which, I suppose, is how Dillinger would have wanted it.