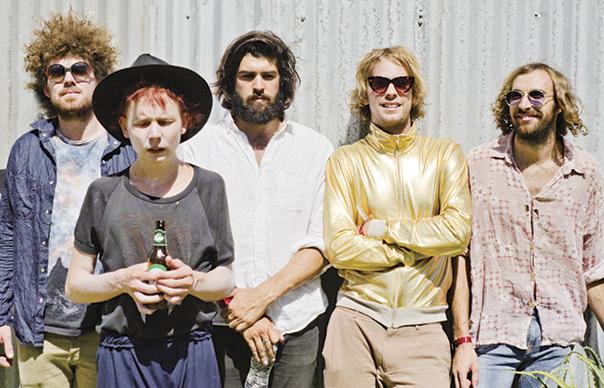 Over the last decade much has been written about the music industry denying bands the chance to experiment and grow. That may be true on major labels, but on the fringes there are still groups churning out great records in fits of creativity, following whatever crazy ideas appear in their heads at that moment. Nowhere is this truer than in the current Australian scene, where bands like Total Control, Eastlink and, especially, Pond are doing just that.

Led by frontman Nick Allbrook, a touring member of Tame Impala until 2013 (all are, or have been, involved with Kevin Parker’s project), each of Pond’s five records so far have pushed the boundaries of the band’s sound. Many of their albums have been recorded quickly, capturing the group’s eccentricities (psychedelic flute solos are a speciality), with 2012 breakthrough Beard, Wives, Denim cut in just one week.

Their last album, 2013’s Hobo Rocket, was their heaviest yet, a maelstrom of acid rock guitar riffing, bizarre synth interludes and excellent, if oblique, song structures.Man It Feels Like Space Again is the polar counterpart to Hobo Rocket. Instead of “man rock”, as drummer Jay Watson described their sound on KEXP recently, the tracks here, written over the same period, are much more accessible and subdued. In contrast to their usual speedy studio style, the band spent time sculpting the sounds and production, even agonising over mixes with Impala’s Kevin Parker – hence 2014 being the first year without a Pond album release since they formed.

Where Hobo’s opener came on like Rage Against The Machine jamming with Cluster – exciting but very, very awkward – the first track on Man…, the splendid “Waiting Around For Grace”, is a silver-toned, synth-led stomper, jammed with so many euphoric moments that it might have been created for a hook-writing competition. The drums are crisp and processed, the synths buzz beautifully and the guitars are brittle with chorus effects, yet the group have lost none of their sense of free-ranging melody present since their 2009 debut, Psychedelic Mango. “Don’t it make you wonder how God found the time?” deadpans Allbrook in the Mercury Rev-esque introduction.

Lead-off track “Elvis’ Flaming Star” is the most immediate moment on the album, another lysergic glam gallop. One major touchstone here, and throughout this playful album, is Supergrass, especially Life On Other Planets, their underrated 2002 album which explored ’70s synth tones and glam rhythms. Coincidentally, or not, it even featured a track, “See The Light”, which referred to Elvis.

Man… is, according to Allbrook, the first time the band have gone minimalist, paring back tracks until each song shines. This turns out especially well on slower pieces such as the psychedelic soul of “Holding Out For You”, which sounds like The Flaming Lips covering the Abbey Road medley (and not making a hash of it a la With A Little Help From My Fwends).

The least immediate, but perhaps most rewarding song here is the closing title track, which, across eight and a half minutes, spans prog, funk, kosmiche and folk. What’s more, it doesn’t feel stitched together as a laugh like some of their earlier work, but properly mapped out, branching sideways to woozy, Beatles-esque climes but always returning to the same cleansing, crystalline guitar and synth melody. At times, the elfin Allbrook sounds almost identical to MGMT‘s Andrew VanWyngarden, his lyrics reaching a similar peak of impressive, non-sensical profundity; though it’s hard to distinguish many of the Gnomic lines under all those space echo repeats.

For all the plaudits that Tame Impala receive, then, Pond have proved that they’re possibly the braver band, willing to squeeze out ideas as soon as they have them, with playful abandon. Their influences are clear, but they combine them in a unique, joyful way, as they endlessly evolve their sound. Here, the extra care and attention to production and arrangements has paid off, making Man… as consistently enjoyably as their older albums were unevenly thrilling.

The question is, though, where do Pond go from here? We have no idea and, gloriously, Pond probably don’t either. The well is not yet dry – stay tuned.
Tom Pinnock