Slicing up eyeballs: the definitive version of an all-time classic... 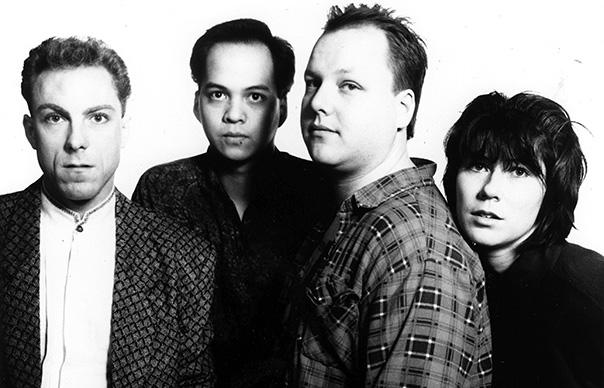 Slicing up eyeballs: the definitive version of an all-time classic…

The 1989 American tour pairing Pixies with Happy Mondays might have initially seemed like a bit of a mismatch: the uptight Massachusetts misfits and the mad-fer-it Manc scallywags. Yet not only were firm friendships forged (as the photos of Kim Deal goofing around in New York with Shaun Ryder and Bez attest); in their own ways, both bands were instrumental in demolishing the ’80s’ tedious dual narrative of excess and austerity. Suddenly, “alternative” didn’t have to mean dogmatic opposition to the mainstream – it could simply be about whooping it up on your own terms. Well, hallelujah and rock a my soul.

Albums don’t come much more whooped-up than Doolittle. Sure, its jittery tales of death, dismemberment, sexual frustration and religious confusion aren’t exactly party tunes in the Pills N Thrills… sense. But Charles “Black Francis” Thompson always had the good grace to vent his id in the form of phenomenally catchy, skin-scorching pop songs. And you’re not meant to get hung up on the thematics in any case. “Eighty per cent of it’s baloney,” admitted Charles to Melody Maker in 1988. “It’s the T.Rex thing of ‘if it sounds cool…’” And boy, did Doolittle sound cool, barrelling unstoppably through a netherworld of eyeball-slicing maniacs, suicide surfers, underwater gods and six-foot tattooed girls inspiring outbursts of frothing Spanglish.

The third release is meant to be the difficult one. True to form, Pixies had virtually exhausted their initial cache of songs from the legendary ‘Purple Tape’ on 1987’s Come On Pilgrim and the following year’s Surfer Rosa (save for the ultimate rainy-day ace-up-the-sleeve of “Here Comes Your Man”). Next, the almost impossible task of quickly penning a whole new – and better – album, in the midst of the gathering hysteria whipped up by the first two. Yet Charles only seemed to thrive on the pressure.

Throughout Doolittle, his ability to switch from virginal croon to lecherous leer to primal yelp at the drop of a hat is breathtaking; Joey Santiago’s white-hot guitar knocks you sideways for much the same reason. And if Kim was smarting from having most of her songs rejected (countryish death waltz “Silver” was her only co-write) you’d never tell, her emphatic basslines and droll counter-melodies proving absolutely essential to the potion.

Doolittle has been such a constant presence in our lives over the past quarter-century, especially since Pixies reformed in 2004, that a reappraisal isn’t really necessary. What this re-release does provide, however, is a fascinating insight into how some of the group’s most enduring songs came together. A rough set of demos taped during rehearsals in early 1988 reveal that “Debaser”’s references to Buñuel’s surrealist touchstone Un Chien Andalou were an inspired late addition, while “Wave Of Mutilation” was carefully extracted from the carcass of another song entirely. Pixies had already proved on Surfer Rosa that they could write tightly structured songs packed with hair-raising dynamic shifts, and by the time they came to demo Doolittle properly in a tiny studio beneath a hair salon in the Boston suburbs in September ’88, most of the songs were greased up and ready to roll. Yet producer Gil Norton’s influence on the end product can’t be underestimated: without recourse to expensive studio trickery (he estimated that Doolittle cost no more than $30,000 to make), the likes of “Monkey Gone To Heaven” and “Debaser” were buffed hard into imperishable rock anthems. Who would have guessed, for instance, that what really made “Debaser” groove was the crucial addition of a tambourine?

Doolittle’s one downside is the absence of a sequel to “Gigantic”. Increased dysfunctionality within the band meant that Kim’s only lead vocal of the period (apart from “Silver”’s queasy duet) was on the listless “Into The White” from the B-side of “Here Comes Your Man” – which, according to producer Paul Q Kolderie, she had to be cajoled into singing. In a more democratic band, some of the songs that ended up on The Breeders’ Pod might have found a home here, but to be fair, it’s not as if Doolittle is carrying any flab. The lyrics may have been baloney but, even at 25 years remove, Doolittle’s lively morsels still taste startlingly fresh.

CD2 features the six B-sides from “Monkey Gone To Heaven” and “Here Comes Your Man” (including the eerie ‘UK Surf” version of “Wave Of Mutilation”) along with two Peel Sessions dated October ’88 and May ’89 – although all but two of those session tracks were previously released on Pixies At The BBC. CD3 comprises the album demos, plus intriguing nascent versions of “Debaser”, “Wave Of Mutilation”, “Hey” and three others, as well as the ‘Purple Tape’ version of “Here Comes Your Man”.
Sam Richards