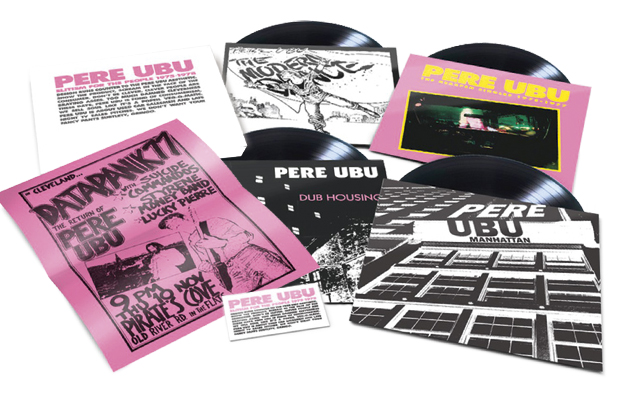 Pere Ubu co-founder Peter Laughner died of chronic pancreatitis, brought on by alcoholism, on June 22, 1977. The golden boy of the fertile Cleveland underground was 24. The response from the band’s lynchpin, David Thomas, who had parted ways with the charismatic Creem magazine stringer a year earlier, has lost none of its myth-shattering force.

“What a world, what a world, what a big world, but a world to be drowned in,” he burbles atonally on “Humor Me“, eyeballs rolling at his old cohort’s dumb determination to become the first terminal Lou Reed wannabe. Morose resignation gives way to uncomprehending, sardonic fury. “It’s just a joke, man.”

Middle-class aesthetes, itching to make the next post-Velvet Underground leap forward, Pere Ubu’s combination of gut-chugging post-Stooges rock and electronic noises evolved from a now-legendary non-starter band, Rocket From The Tombs, who essentially split in two. Cheetah Chrome and Johnny Mandansky left for New York to found punk schlockers the Dead Boys, while Thomas and Laughner stayed in Cleveland, bent on something more idiosyncratic.

The seven-inches they self-released on Thomas’ Hearpen label and 1978’s The Modern Dance created a dirty-bomb formula; a chassis of Nuggets garage rock, plastered with horn honks and machine chatter generated by their in-house Delia Derbyshire, future airline pilot Allen Ravenstine. That first album, however, marked the point when they sweated the filth from Ohio’s industrial cooling towers out of their systems; street-walking cheetahs on “Street Waves” and “Non-Alignment Pact”, free-forming spook noise mavens on “Sentimental Journey” and “Chinese Radiation”. Dark, daunting and peppered with Thomas’ tone-deaf-cockatoo vocals, it is a soundtrack to alienation, but with closing track “Humor Me” – a clear-headed rejection of rock’s dumbest conventions – the slate was wiped clean.

Album number two, released barely nine months later, sounds not so much like the work of another band as another species. “I’ve got these arms and legs that flip flop flip flop,” chirrups Thomas, marvelling at the wonder of existence as he dad-dances his way through Dub Housing‘s opening track, “Navvy”. Wonders rarely cease thereafter.

Smash martians gatecrash a beach party on “On The Surface”, while the title track splices Patti Smith’s “Land” with Roxy Music’s “For Your Pleasure”, Thomas’ narration a further warping of normality. “Hear the sound of the jibberty jungle,” he cries in mock terror. “In the dark, a thousand insect voices chitter-chatter.”

It gets odder still; Thomas reckons Pere Ubu were not crazy dub-heads – the album title was an in-joke about terraced properties on the road in to Baltimore – but “Thriller!” uses every trick in the Lee Perry book and more, all its moving parts slightly out of whack, Tom Herman‘s tiki guitar doodles giving way to a monstrous crunching sound, caterpillars chewing on eardrums.

The seasick feeling returns on “Drinking Wine Spodyody” – title lifted cheekily from a 1947 jump-blues novelty – and “(Pa) Ubu Dance Party”, Thomas gleefully talking through his creative processes: “I went out and stirred the air, my soup was steeped in strange ideas.” Few could have been more uncanny than “Blow Daddy-O”‘s mad juxtaposition of feedback, scampering phased guitar and lumbering aircraft engine noise. And then there’s “Codex”, a song about obsessive love that simultaneously mocks the concept of obsessive love and the concept of songs. “I think about you all the time,” Thomas repeats over a somnambulant forced march – a broken version of “The Song Of The Volga Boatmen” or a chain-gang approximation of Snow White’s “Heigh-Ho”.

“We had been promised the end of the world as children, and we weren’t getting it,” wrote Laughner’s ex-wife Charlotte Pressler, explaining her contemporaries’ dystopic worldview in a 1978 Cleveland scene memoir. Elitism For The People documents Pere Ubu creating their own private musical apocalypse, and then forging on to start the world anew. Not a world to be drowned in, but one to treasure.

Q&A
David Thomas
You have said that Pere Ubu fixed rock in this period: how did you think it was broken?
Rock gets broken when it loses its forward drive. When Pere Ubu formed, there were lots of local bands playing the main rock venues who could do covers of Spirit just perfect, and we just thought there was more to it than this. We despaired at the ordinariness of it.

Putting out your own record in 1975 was fairly unusual: what drove that decision?
Rocket From the Tombs ended very badly in the summer of ’75. I wasn’t going to mess with a band anymore – I just wanted to leave something behind. My ambition was to have a record in one of those Salvation Army record bins which somebody could come across in ten years’ time and say: ‘Wow, there was this band in 1975 in Cleveland…’.

Do you feel that you had any genuine peers musically outside Cleveland?
Peter loved Television. Did we see them as peers? I don’t know – I always see everybody as a rival. We were very much aware of what they were doing – but we were also aware of what other people were doing, in Indiana, San Francisco… One of the reasons that I despaired of the punk phenomenon was that it wiped out a whole generation of emerging bands. Punk was the new paradigm. It was the easy thing to copy. In a lot of ways the really great lasting bands from the early ’70s like Television, Pere Ubu, the Residents and Talking Heads were all pre-punk.
INTERVIEW: JIM WIRTH