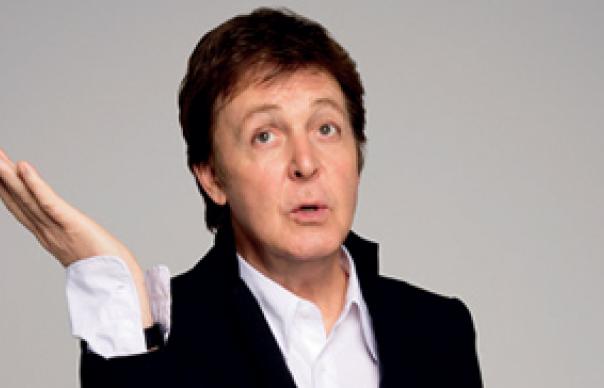 For those who like their rock stars brooding and enigmatic, Paul McCartney must be an endless source of consternation. Avuncular, effortlessly tuneful and – shock horror – freshly signed to coffee giants Starbucks new label, each cheery thumbs up represents another nail in the coffin of the myth of the tortured artist.

Little wonder Macca’s collaboration with Nigel Godrich – the serious muso’s knob twiddler of choice – on 2005’s Chaos And Creation In The Backyard proved so fraught. With a place in the musical and social history of the twentieth century secure, further self-immolation must seem about as attractive as a career appraisal from Scroobious Pip.

The upshot, then, is Memory Almost Full. Played and written entirely by Macca and produced by David Kanye, it comes, like their collaboration on 2001’s Driving Rain, with a breezy determination not to take itself too seriously.

Opener “Dance Tonight” (“Everybody’s gonna dance tonight/Everybody’s gonna feel alright”) is a jaunty two-fingers to introspection; ‘Ever Present Past’ a good-natured Beatle-esque nod to ‘the weight’.

It’s not all tea and biscuits over at Fab FM. “Only Mama Knows” sees him growling cryptically about “this godforsaken place” amidst smoking amps, whilst a brooding “House Of `Wax” is a cryptic puree of nightmare images and howling, clifftop guitar solos.

Yet a quiet humanism prevails throughout. McCartney is no longer striving to satisfy a Lennonesque foil, a quest which began with 1989’s Costello collaboration Flowers In the Dirt. Instead, he downloads random memories in his journey from Speke to superstardom with warmth and more than a dash of wry humour.

“That Was Me” finds him leafing through his photo albums (“That was me/ Merseybeatin’ /With the band”), before exploding “It’s pretty hard to take it all in!”; ‘Vintage Clothes’ is a cheeky reminder not to get too lost in the past. Divorce lawyers for Heather Mills, meanwhile, will take succour from ‘Gratitude’ (“I should stop loving you/ Think what you put me through/ But I don’t want to lock my heart away”).

Above all comes a sense that McCartney has finally come to terms with his own legend.

As boisterously sentimental as The Cavern at closing time, Memory Almost Full is a reminder that, in the long run, the least serious albums often say the most.