Neil Young – Fork In The Road

Rockin’ in the recession: a bracing blast of riffs, humour… and cars 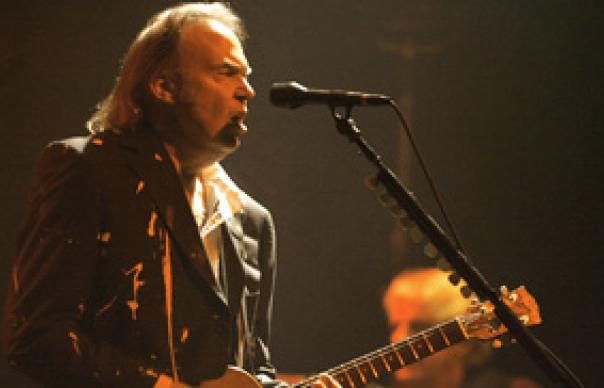 Of all the devastating put-downs in his arsenal (Joan Baez, you’ll remember he said, was “like a lamp”), Bob Dylan reserved his most poisonous dart for another of his contemporaries, Phil Ochs. “You’re not a folk singer,” he pronounced, damningly. “You’re a journalist.” A terrible insult in any language, certainly, but here one with genuinely crushing power. Folk songs, after all, survive for generations. Pieces of journalism can, at best, hope to survive until the following morning’s edition.

Enduring songs, political songs, songs which aren’t meant to last long at all… one would imagine that all of the above, and more have lately been on Neil Young’s mind. Recently engaged on the first installment of the career retrospective Archives set, Neil Young has lately had his attention on his past: what has been proved to be of enduring value, what’s worth editing out, and what, in fact, is best left unsaid. In every respect, Fork In The Road – a brief, bracing, at times very funny garage-rock blast – is the absolute opposite of such an enterprise.

As with its closest precedent, the brief, bracing, garage rock blast of 2006’s Living With War, what’s on offer here is not Neil Young the shy, meditative, folk singer we’ve lately heard emoting from newly released archival recordings. Instead, this is the work of a man who has – again, so soon – been moved by current events to put something down on paper. If Young’s 2009 subject matter makes him a journalist, so does his method. This is no florid essay, but rather angry editorial banged out on a tight deadline, with little regard for the niceties of technique.
The subject matter of the piece? That, though not quite as boldly signposted as in Living With War, is still announced pretty plainly. The subject is the recession, and it’s a topic Young chooses to address using one of his most consuming passions as a barometer of the situation: cars.

There are moments in the album which tackle the economy more overtly (“Cough Up The Bucks”, in which he asks, simply, “Where did all the money go?”; the highly amusing album closer “Fork In The Road”, in which Young opines in caustic, Mark E Smith style that “There’s a bailout coming/But it’s not for me…”, and tells us to “Keep on blogging/Until the power goes out…”). Elsewhere, however, the car is, undoubtedly, the star.
Track four, “Johnny Magic” sets the tone, an elegy for a time when a guy could, as in a road movie, fill a preposterously long automobile with cheap gasoline, and head out on the road (“He met destiny/In the form of a heavy metal Continental/Born to run on the proud highway…”). It’s not mourning the act of driving itself, so much as it is the death of what it used to represent.

In Young’s telling here, what formerly spoke of independence, the search for a new start, even freedom, has by 2009 become a guilty pleasure (“Then the world started running out of money…”), and even a political act. After all, does the US not now fight wars for this gasoline?
Driving and cars are everything on Fork In The Road. Sometimes, as on “Hit The Road” they’re agents of environmental pollution (“Bumper to bumper/In a giant cloud of fumes…”). Sometimes, as on “Get Behind The Wheel”, they seem to serve as what sounds like a double entendre (“She always wants to please you/No matter what shape you’re in…”). Sometimes, as on “Fuel Line”, they’re journeying, battery powered, to the future.

Over all, you wonder if it’s a supremely intelligent way to connect with a middle American audience whose No 1 pre-election priority was not solving the war but the restarting of the economy, and a country whose auto industry is in terminal crisis. Remember the guy in the CSNY film who walked out during “Let’s Impeach The President”, saying the band could “suck my dick”? Neil wants him back on board, and perhaps cars is how he thinks he’s going to speak to him.

If that person favours the smoking, ragged garage rock that comprises the bulk of Fork In The Road, then you’d have to conclude, job done. While seemingly banged down in real time, the album contains a good deal of wry muttering, plenty of fine riffs (particularly the opening “When Worlds Collide”) and some surprisingly sophisticated backing vocals. If Young’s own car graveyard is going to remain a charming rock-star’s folly rather than a painful economic metaphor, the journey (this researcher into electric cars seems to be saying) must be forwards, powered by green fuels.

Early on in the LP, the wonderful “Just Singing A Song” – a languid, classic Neil groover – had suggested that for all the good tunes, and good intentions, all this kind of rock’n’roll protest can’t do much to change the world. So where does this leave Fork In The Road? A set of enduring classics? Or simply journalism? Either way: hold the front page.