The loosest group in rock reunite with Young for this dark, raw and thrilling slice of electrified folk... 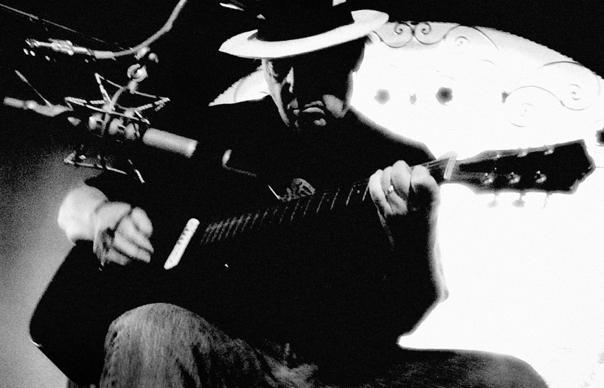 The loosest group in rock reunite with Young for this dark, raw and thrilling slice of electrified folk…

There’s always a certain shambolic, rough’n’ready flakiness about Neil Young’s intermittent exploits with Crazy Horse, the feeling that he’s re-establishing a natural equilibrium tilted too much towards the prim and proper on his more polite mainstream country-rock outings. (Not that there’s been too many of those recently, mind.)

So it seems pretty much like business as usual when “Oh Susannah”, the lead-off track here, stumbles into action with the relaxed, extempore manner of an after-hours blues jam. His bandmates chant the title as Neil launches into the first verse, and it’s immediately noticeable how the outward jollity of Stephen Foster’s minstrel standard has been supplanted by an air of brooding menace, just as Young’s grimy electric guitar has replaced the “b-a-n-jay-o” lyrically set upon the protagonist’s knee. As ever, there’s a gnarled appeal to the band’s riffing, with high-register harmonies sweetening the chorus, and if you turn up the volume right at the end you can hear Neil commenting as the song grinds to a halt, “Sounds really funky, gets into a good groove.”

This is the opening to Americana, Young’s nostalgic anthology of the kind of popular folk ballads that he might have sung when first learning to play folk guitar. Songs like “Travel On”, “Clementine” and “Tom Dooley” (here, “Tom Dula”) were staples of folk clubs during the first folk boom – not the ’60s one with Bob and Joan and Peter, Paul & Mary, but the late ’50s one when The Kingston Trio topped the US charts with rousing singalongs of ballads whose deeper meanings were lost amid the clean-cut bonhomie which, while suggesting an alternative to the suburban dreams of the Eisenhower era, was perfectly palatable to those suburban sensibilities.

So when Neil and Crazy Horse here focus on exposing the darker sides to these folk standards, are they simply returning the songs to their roots, or making an oblique commentary on the violence and bloodlust that has always underscored American history? After all, if murder ballads were deemed acceptable fare for postwar suburbanites, what does that say about the assumptions of that society? And given that, who could cavil about the latterday popularity of gangsta-rap? Is it not just another set of fables about romanticised outlaws?

Take “Tom Dula” here, stripped of its Kingston Trio charm and left exposed as a plodding murder ballad, grimly celebrating the killer’s just desserts. It chugs along gamely, with the band offering a ragged, drunken-sounding title-chant as counterpoint to Young’s lead vocal, like a bunch of soused barflies stumbling from a saloon to whoop it up around the gallows. Even with the more formal falsetto harmonies presumably added later, it’s a mean-spirited performance compared to the ebullient singalong of memory. Likewise, “Clementine” – cemented in ’60s memories by years of Huckleberry Hound cartoons – here has a vast lowering cloud of menace hovering over it, as a rolling thunder tattoo of tom-toms drives the song to its grim conclusion through a prickly bush of dirty fuzz-guitar arpeggios. And while I don’t recall Huck Hound ever reaching the grisly lamentation, “Though in life I used to hug her, in death I draw the line”, I can’t help wondering, what on earth were Hanna-Barbera feeding us kids?

Given the way that Young is revealing the darker aspects of seemingly charming songs, and presenting them in a kind of gothick blues trudge, the upbeat, jaunty approach afforded the self-evidently gloomy “Gallows Pole” seems quixotic by comparison. It’s like a two-step country dance, in which the doomed man’s repetitive, rejected plaint seems mocked by the jauntiness and the clean, high-register sheen of the harmonies. The folk-club standard “Travel On” is taken in similarly chipper fashion, with some pleasingly astringent lead breaks for Neil taking the melody into virgin territory. Confirming suspicions that these tracks are all pretty much first or second takes, the song sags slightly after the last chorus, as if the band were caught preparing for the end, half a minute too soon, having to quickly pick up the slack and bring it on home properly.

The appearance of “Get A Job” midway through Americana is welcome, but bewildering, a token blast of grease-monkey doowop blessed with more enthusiasm than accuracy, which lends it a certain déclassé charm. If, say, The Beach Boys had covered this, every “yipyipyip” and “shananana” would have been primped and preened to the point of pristine lifelessness, but here the air of amateurishness anchors it firmly on the street-corner. Neil’s simple guitar break is entirely appropriate, too – not quite the one-note marvel of “Cinnamon Girl”, but getting there.

On the old Richie Havens staple “High Flyin’ Bird”, Crazy Horse’s resolutely earthbound plod helps cement the aspect from which the protagonist enviously watches the soaring bird, the ground seeming to set around him as he moans, “Look at me, Lord, I’m rooted like a tree”. “Jesus’ Chariot” (aka “She’ll Be Comin’ Round The Mountain”) is another standard subjected to a shadowy makeover, with a tom-tom tattoo and a brooding undertow of chords just like those used to signify the menacing presence of hidden Injuns in old cowboy movies, while Woody Guthrie’s “This Land Is Your Land” is taken dead straight as a community singalong, as befits its standing. As the album’s end approaches, “Wayfarin’ Stranger” offers an oasis of understated quietude: despite the hushed harmonies and acoustic guitars, it possesses a ghostly, haunted quality that lends depth and anxiety to what used to be a gospel singalong.

Which would have been a perfect place to conclude the album; but with a typical piece of Neil Young perversity, he goes and sticks “God Save The Queen” on the end – and not the Sex Pistols one, either. It’s not an appetising prospect, to be honest: the song’s fundamental stodginess is redoubled when subjected to the characteristic Crazy Horse trudge, rather like deep-frying a dumpling in batter. Unless there’s an unforeseen element of Canuck royalism in Neil – after all, it is Jubilee year, and he probably deserves a gong of some sort – I’m surmising that it’s the anthem’s rousing assertions of self-determination that attract him. Though it’s not quite the anthem of freedom he might like it to be, of course. There’s nothing in his version about crushing rebellious Scots, for instance, which is a slight pity. It would have been fun watching him trying to smuggle that past an SECC audience.
ANDY GILL