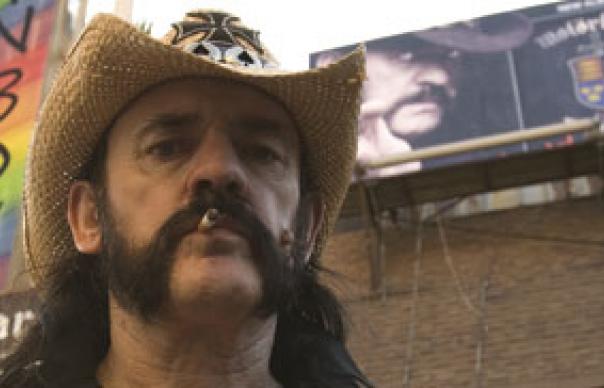 “Don’t tell anyone, but Lemmy’s a really nice guy,” says Mike Inez from Alice In Chains, but it’s part of Ian “Lemmy” Kilmister’s charm that his really-niceness is buried, albeit fairly close to the surface.

I should know. I interviewed him in the 1980s in his splendid terraced house in Willesden, every inch of ceiling space taken up with model WWII aircraft, where he got me drunk on vodka and we had our photo taken in the garden together. And then, six weeks later, when I decided, perhaps foolishly, to introduce myself to him again in the Limelight Club when he was talking to some women, Lemmy strangled me. For quite a long time. Things like that tend to stick in the mind.

But who, one wonders, is the real Lemmy? This is a man who’s on good terms with one of his sons but has never met the other one. A man who’s “really nice” but has a collection of Nazi memorabilia and has said some odd things about the Holocaust. A confirmed bachelor (no, not that kind) who’s had sex with 1,000 women (“It’s not that many when you consider that I’m 64,” he explains) who also seems entirely gentlemanly with the ladies. And a member of the ultimate hippy group, Hawkwind – he sings, let’s never forget, on their sole hit, “Silver Machine” – who formed a heavy metal group whom the punks loved.

Motörhead are a truly great rock band, sometimes underrated because of their cartoony persona. Their best music, from Ace Of Spades to the mournful 1916, is as good as anything in rock music, but most of that greatness is relegated to the second DVD. This documentary – as the title suggests – is, for once, about Lemmy rather than his band. And it looks at its subject by, as it were, walking around his life, spending time with him in Los Angeles and with many and various rock star fans. Along the way we meet Lemmy’s son Paul (“What’s the most precious thing in this apartment?” asks the interviewer and Lemmy replies, “My son”) and various fans. There’s Dave Grohl trading anecdotes about the crapness of The Darkness, Billy Bob Thornton and Lemmy discussing country music, and a slightly unexpected cameo from Jarvis Cocker concerning Hawkwind (sadly, Lemmy and Jarvis do not meet and record an album together).

Also on hand are members of Lemmy’s three great bands: The Rockin’ Vickers, Hawkwind and Motörhead. It’s a DVD crammed with moments. There’s Lemmy’s appearance in Californication, Lemmy and son playing onstage, and Lemmy and his Nazi daggers (he has other swords, it’s only fair to point out, only not as many without swastikas on). The Extras DVD is stuffed with music, more interviews and yet more music. There’s plenty here, and access to Lemmy is both total and well-used.

And the real Lemmy? Sometimes it looks to be rather bleak being Lemmy, a man in his sixties living alone in a foreign country, someone with more admirers than friends, someone who’s never married and is estranged from one of his own children. His interests – sex, war and rock, essentially – are teenage (there’s an oddly charming scene where Lemmy meets some Americans who own a WWII German tank and he gets all the technical specs wrong, like your dad admiring a sportscar but not actually being a qualified mechanic). You do feel, as a friend of mine who visited Lemmy in his apartment to interview him told me, that he may well be a lonely man, held together with his obsessions, his Jack and Coke and his collection of (admittedly brilliant) rock anecdotes. That said, the presence of son Paul in his life is clearly an important and humanising one, and he has no shortage of admirers, male and female, queueing up to be with the great man.

In the end, this is a man who’s cultivated the Lemmy persona – aggressive on the outside, gruffly warm on the inside – for so long that it’s hard to tell Lemmy from the caricatures and action figures of himself he shows off to the camera. Probably, that’s the way he likes it – although you do feel oddly protective off him as LA rocker after LA rocker lays claim to “Lem” as though we hadn’t had him playing our fruit machines and touring with our punk bands long before Sebastian Bach and The Offspring were thought of. And in the end, underneath that leathery, warty, speed-freak biker persona, there is an intelligent, contradiction-filled, witty, bluff and extraordinary man. Whoever he is.