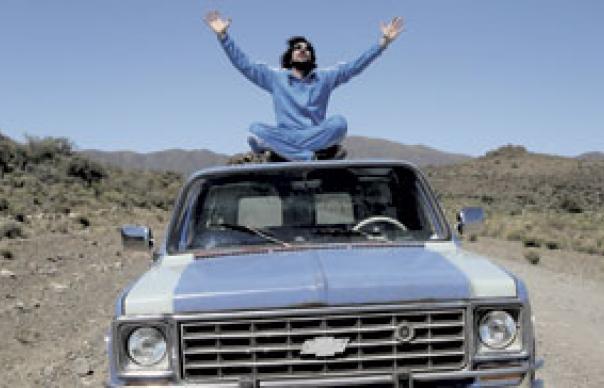 In 1974, Gruff Rhys was watching TV in Wales with his family when an extraordinary figure appeared on screen. It was a man, dressed in a flamboyant red cape who rode a horse on to a stage. He looked like a cross between a superhero and a cowboy and was carrying a Spanish guitar, which he played while singing mournful Latin American love songs in strangely accented Welsh. “Who’s that?” Rhys asked. His mother told him it was “René Griffiths. He’s from Argentina and you are related to him.”

So began Rhys’s fascination with Griffiths, which the Super Furry Animals’ frontman explores in Separado!, a suitably eccentric road movie/tour diary/sci-fi/music film/western/documentary about genealogy. Separado! is a bit like an episode of Who Do You Think You Are? directed by Alex Cox and was made in part thanks to Rob Stringer, the former chairman of Sony, who gave SFA £15,000 to make a film five years ago. He would be unsurprised at the idiosyncratic result.

It begins in the woods of Bala, Wales in 1882, with a sinister, flickering reconstruction of a horse race between two men in black robes, which ends in disaster when one is killed after their horse trips on a suspiciously placed rope. This is the incident that caused Dafydd Jones, Rhys’ great-great-grandfather, to flee Wales for the paradise of South America – and it’s this branch of the family that produced the singing gaucho René Griffiths, who returned to Wales briefly in the ’70s as an overnight pop sensation.

Although Rhys doesn’t know where Griffiths lives or even if he’s still alive, he decides to track him down, following in the footsteps of the Welsh pioneers who arrived in Brazil in the 1850s to set up a free Welsh colony – free, that is, from the extinguishing influence of English cultural imperialism. Driving a battered VW Beetle, Rhys and co-director Dylan Goch travel to Pelotas in Brazil where the Welsh first settled, and down to the Patagonian village of Gaiman, a Welsh colony of teahouses, chapels, dragon insignia, daffodils and a phone book full of Williamses. A third of the residents of Gaiman claim Welsh descent and it’s here that Rhys puts on one of many performances, first assuring the elderly DJ of the local Welsh radio station that his music is “pretty simple, very melodic” even if he occasionally performs it while wearing a bright red motorcycle helmet and singing through a cup. His performances are an enduring highlight of the film; he even plays one show outside a shack near the Welsh town of Esquel in the Andes, said to be the site of Butch and Sundance’s last stand, to an audience consisting solely of a disinterested horse.

There’s plenty of music in the film, ranging from an elaborately choreographed Wales-via-Bollywood song-and-dance magic-realist ode to emigration that’s performed on a beach by singers dressed as colourful peasants, to an impromptu solo by a Chilean singing hairdresser, who’s married to one of Rhys’ many Argentinean relatives. It’s eclectic stuff. In Brazil, we meet Tony Da Guttaro, a TV repairman who dresses like a hippy from a Robert Crumb comic and has invented his own instrument, a sort of electronic percussive guitar. Later, high in the Andes, Rhys finds two singing gauchos, brothers with the quintessentially Welsh-Argentinean names of Alejandro and Leonardo Jones, who sing beautiful harmonies of love and loss on their mountain farm.

Although the film indulges in the odd surreal moment – notably when Rhys dons his red helmet and kaleidoscopes into oblivion every time he travels long distances – it’s essentially a straight retelling of the Welsh journey across South America, bolstered by interviews with historians who explain why the Welsh ended up so far from home and touching on issues of genocide and revolution.

But the thread running through it all is René Griffiths, the romantic cowboy Welsh-Argentinean pop singer, who always seems to be one step ahead of Rhys. At one point, Griffiths is spotted in a TV doc from 1984, engaged in the pointless task of farming guanacos, a sort of tiny llama that is almost impossible to catch and produces practically no fur when you do. As a plan, it’s whimsical, unconventional and hugely endearing – as a parallel of Rhys’ own adventures in Separado!, it’s impossible to better.
EXTRAS: None.
Peter Watts